Adkins (Co-founder of Nerds on Earth, suspects aliens are already among us) Inspired by the box office success of Deadpool, whose approximately $50 million budget has raked in over $600 million at the box office, we are offering up our choices of other nerdy movies that were just fantastic despite their lower budgets. First up: Morgan. Whatcha got? 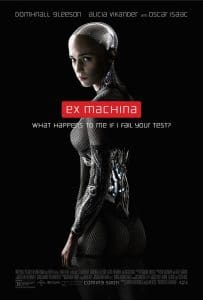 Morgan (Actually an android) I thought Ex Machina was fantastic. Of course I was sold when I found out that two of the Star Wars The Force Awakens‘ main actors were in it, especially Oscar Isaac. The film budget was only $15 mil and granted it only brought in around $38 mil. But they got to do a lot with the film because really there were only 10 cast members, and most of the CGI stuff was really simple digital filming tricks.

Ross (One of the suspected aliens) I still haven’t seen Ex Machina, ever since I found out it WASN’T based on the Brian K. Vaughan/Tony Harris comic of the same name.

I was so sad, I’ve been living in “What’s the point” mode ever since, even though I could currently watch the movie right now, for free, on Amazon Prime.

You should watch it! It’s still amazing in my opinion.

Adkins You might consider giving it a viewing anyway, Ross. I found it to be legitimately good myself.

Morgan I’m the epitome of lazy, if I can do it, so can you!

Adkins The vast majority of the movie requires very little by way of visual effects. A series of dialogues take place in fairly static environments, but the movie is deceptively stimulating.

Ross Give me the elevator pitch. What’s it about?

Morgan Pretty much the main guy Caleb is a programmer and he wins this one week trip to Nathan’s, his CEO’s, secluded house. Nathan has built this human android called Ava and Caleb is super intrigued and wants to test its abilities, see how human it is. Well turns out Ava is definitely way more self aware than anyone thought and you know how the story goes with self aware robots.

Adkins Skynet, for sure.

And I don’t want to spoil the ending, but it was perfect IMO.

Ross Well, I’ll make some time for it.

Morgan Of course that is a very brief summary but yeah the ending is so well done.

Adkins What are you bringing to the table, Ross?

Adkins Those are some shiny credentials.

Got an elevator pitch?

Ross “Allegory for apartheid is improved with mech suits.”

Ross It was a very short elevator.

In all seriousness, District 9 is a perfect science fiction movie. It’s in the vein of movies like The Day The Earth Stood Still, They Live, and Stepford Wives (the original), movies that actually have something interesting and relevant to say about modern society and tell an amazing story about it.

That’s the original DtESS as well

The best science fiction uses the future to tell us something about our present.

Morgan I actually really liked District 9. I didn’t think I would. But I did.

Ross And District 9 managed to not only bring attention to institutionalized racism in South Africa, it also managed to be a sick action movie.

I was excited about it for a long time–the director, Neill Blomkamp, had been attached to a Halo movie for the longest time, and I tracked down a bunch of his short films, including one called “Alive in Joburg,” which is the inspiration for District 9.

And even though Elysium and Chappie haven’t lived up to the quality of District 9, Blomkamp is gold as far as I’m concerned.

Adkins I don’t own many DVDs, but District 9 is among them and deservedly so. You’re right on all points, and I especially like your comment about science fiction leveraging a future fictitious scenario to speak to the present.

Ross That’s what makes a movie true science fiction for me. Otherwise, it’s just an action movie with aliens.

Or a romcom with aliens, etc.

Adkins I’ve gone on record expressing similar thoughts when talking about the prevalence of apocalyptic settings for science fiction.

It doesn’t speak well of humanity’s present condition(s) in my opinion.

Ross I don’t think anyone who was being honest could speak well of us right now.

But that’s just my cynical view.

Adkins A not uncommon one, unfortunately.

My submission didn’t do very well at all at the box office, and that was due in part to a fairly limited release (66 theaters worldwide compared to the 3,500+ theaters most major releases see) and short-lived exposure (9 weeks at the box office as opposed to the 18-24 that is more common nowadays): Attack the Block.

Adkins Tiny budget: Only $13 million. But it, too, holds down a 90% rating on Rotten Tomatoes.

Adkins That’s the one.

Elevator pitch: A small gang of British teens are all that stands between London and a hostile alien invasion.

Ross Any comparisons to The World’s End?

Adkins The aliens bit? That’s about all I’ve got.

Attack the Block doesn’t have nearly the scale that The World’s End does as far as the alien invasion goes and the character motivations are completely different.

The movie does some interesting things with the main characters. You start off kinda hating them for being mugging thugs but they end up being the heroes.

Ross I can get behind that

Adkins There is a lot in it, I think, that is commentary on a culture of violence.

I would imagine that it’s going to grow a little in stature, now that Boyega’s got his face in Star Wars.

Adkins Man, I hope so. It deserves a much wider fanbase. I consider myself to be fairly on top of most of the nerdy things out there, but this even evaded my own radar until two years ago.

Ross So what’s the takeaway from all this? Would it be better to see a $50 million Superman film instead of a $250 million one?

Morgan It’s all about the quality. The type of director you have and the type of cast you can get. I’ve seen some great big budget and some great low budget.

Ross I don’t think we can say that there’s a direct correlation–less money doesn’t equal more quality–but I believe it was the great American poet Notorious B.I.G. who said “More money, more problems.”

Adkins I think what we proved is that its not so much the dollars but what is done with them that matters. We’ve each seen some fantastic low budget movies, but we’d be lying if we said there’s no such thing as an amazing big budget movie.

Adkins And so now we brace ourselves for the $400 million+ budget of BvS with bated breath and crossed fingers. Will it prove to deliver appropriate bang for the buck, or will our significantly lower budget offerings top even this financial colossus in quality?

I’m sure we’ll post an opinion or three on that very thing within the month. Until then, that’s all for now!