A Review of The Force Awakens

In case you missed the onslaught of merchandising that started back in January, or the trailers, or the full blown hype machine of the past few weeks, a little film called Star Wars: The Force Awakens set box office records over the weekend, becoming the largest opening film worldwide, and that’s without it even opening in China.

And later this week, in a desperate search for the elusive pageviews, people will start to dismantle the film, pointing out minor flaws and reminding everyone that people said they liked The Phantom Menace as well. And, if I can, I’d like to say, go eat lemons.

[divider] A Review of The Force Awakens [/divider] 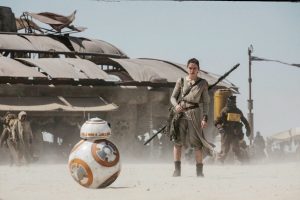 The Force Awakens is the best movie in the Star Wars franchise since Empire Strikes Back and I am not walking out on a limb to say that. If you haven’t gone to see it, do. Make plans. Skip the holiday party at work. And take any child you can.

JJ Abrahms and company took on a task that is, without a doubt, much harder than when Lucas launched the prequels. Lucas was the godfather and he had a map about where he needed to stick the landing; everyone knows how Anakin ends up in the end. He just had to steer the series to that soft landing and wrap it up.

Whether he did that or not is a matter of dispute. What this group had to do with The Force Awakens is much harder in some ways. They have to steer the franchise into a new direction, while at the same time not abandoning the old and not making the mistakes of the prequels, one of which was so shrinking the world to the point that everyone knew everyone else.

No one went into the first prequel with anything but excitement. Everyone went into The Force Awakens with a feeling of hope but also a lingering doubt and dread. All of which makes the task of these movies so much hard and that much more amazing because they nailed it.

It is a solid 9.5 out of 10 nerds and quit reading from this point forward if you haven’t seen it because I don’t want to spoil it.

[divider] A Review of The Force Awakens [/divider] 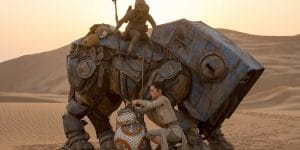 Some are calling this film a re-boot of A New Hope, the original, first released Star Wars movie. There is no doubt that there are deep similarities between the two. But the right word is that this film is an homage.

There has to be a genuine sense that his work in rebooting the Star Trek franchise helped JJ Abrams learn how, to, and what to play with. So there are moments and beats that are direct parallels.

But within that structure, there are little tweaks that make the film that much more genuine and unique. They say to be a great artist, you have to understand the greatness of the ones who went before you and you get the permission to improvise, change and even improve.

Here are some of the changes that they do that make the story more compelling: 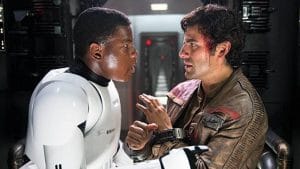 The new characters. Think about this: in 20-30 minutes, they introduced 2 completely new characters, made them sufficiently independent so that the audience cared about them and then wove them into the fabric of the Star Wars universe. That is an astonishing achievement in a movie that could easily have been just straight fan-service schlock.

Sure, the Millennium Falcon shows up and you cheer but it is after they have set the stage. Rey and Fin are astonishingly great characters from the get go. Their eyes and hearts will be the ones that the remainder of the story is told through.

And, later this week, I will write on why Rey is such an important character for the Star Wars franchise. And Fin is equally compelling, making a serious hero out of a joke idea: what about the guys who just work for the Empire and take a paycheck? His shift is astonishing, all under the banner of “it was the right thing to do.” 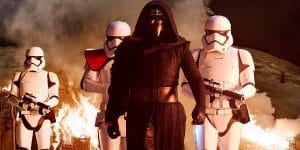 A compelling villain. Let’s face: the bad guy in this movie is what anchors the whole film to the previous franchise. Without saying too much about his lineage, he is the one that makes all the other pieces from the past be more than just fan service cameos.

The proper balance between looking backwards and forwards. Because of how they structured this movie, it creates interest in both the past and the future at the same time. I want to know what Luke is going to do from that point forward, but I also want to know what has he been doing for these missing years. What was Ben Solo like as a kid and what warped him to becoming what he is? Are Rey’s parents people we know or new people? What about Fin?

There are things I can point out that are a little too hackneyed and easy to point out as flaws in this movie. But they are so minor compared to the overall greatness of the relaunch of the Star Wars franchise. The dread that made me fearful of trailers, of the merchandise, and, ultimately of the whole series of movies to come has been replaced by a hopeful optimism.

Star Wars is back and I am giddy about it.

Now scroll below and add your score to our review.

Weekly Nerd Chat: Speculation on What Happens in Episode VIII