I nerd out over science fiction – particularly the stuff that’s mainstream enough to gain a wide audience, but still maybe a little bit fringe. I’m the only person I know who has the Farnsworth noise from Warehouse 13 as the ringtone on their phone. Pair that up with the fact that my default text alert tone is the door chime from Star Trek: The Next Generation, and I think I’ve made my point.

In addition to my nerdiness about sci-fi, I get nerdy about stuff like baseball, and philosophy and theology. As fate would have it, there is an X-Files episode out there combines these favorites – Baseball, the X-Files, and somewhat heavy-handed allegory. For the uninitiated, here’s the rundown of The X-Files episode 619: The Unnatural.

The X-Files baseball episode 619: The Unnatural

Mulder gets interested in an account of a Negro League baseball player in 1947 named Josh Exley after seeing a photo in an old newspaper of Exley, Arthur Dales (who created the X-Files), and a shapeshifting alien bounty hunter.

The newspaper leads him to Arthur Dales, brother of the Arthur Dales who created the X-Files (they have a sister and a fish also named Arthur Dales, apparently). Dales tells him the story of when he was a police officer in Roswell, New Mexico, in 1947, and was assigned to protect Exley from threats against his life. The heart of his tale is this question – “Do you believe that love can make a man shapeshift?”

It’s 1947, and Negro League legend Josh Exley is on pace to hit 61 homeruns in a single season, which puts him on the radar of the New York Yankees, and also in the crosshairs of people who want to keep pro baseball segregated. Dales does his job conscientiously and thoroughly, keeping his eyes peeled for any threat on Exley’s life. Along the way, he develops a budding friendship with Exley and his teammates on the Roswell Grays.

Things get strange when Exley is hit in the head during an at-bat. He babbles what seems like gibberish before saying he remembers that he is from Macon, GA, then finally gets to his feet. But strangest of all is the greenish goo that eats away at the catcher’s mitt that was used to prop up Exley’s head while he was unconscious. Dales has it sent off to a lab to be analyzed. 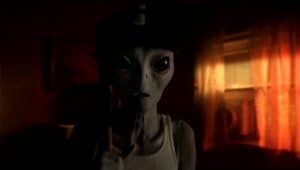 That night in the team’s hotel, he hears a noise from Exley’s room and investigates. As he enters the room, he catches Exley unawares and sees him in his true form – Josh Exley, it turns out, is an alien. Exley explains to Dales later that his people don’t laugh, don’t even have a word for it, and never do anything unnecessary. So when he first saw a baseball game, he fell in love and decided not to return home. This decision also attracted the notice of the alien bounty hunter that Mulder happens to have been chasing after for some time in the here and now.

The bounty hunter shows up and scares Exley into renouncing his humanity and returning home. But Exley can’t let baseball go. He wants to play in one more game so that he can hit one more home run, number 61, and break Babe Ruth’s single-season record.

Just as Arthur Dales shows up, the bounty hunter kills Josh Exley. Dales runs over to Exley and supports him in his final moments. Exley tells Dales to stay back and not touch him, because his alien blood is like acid to humans. Dales consoles him, holding up his hand for Exley to see and telling him, “See, Ex… It’s just blood.” Josh Exley dies with a smile on his face, having lived up to his words from earlier in the episode – “Hell, I don’t want to be a famous man. Just a man.” Josh Exley’s love of baseball had literally turned him into a human being. 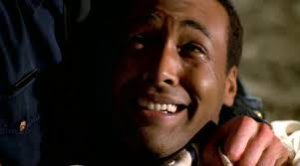 The episode ends with a sweet moment between Mulder and Scully, with Mulder teaching Scully how to hit a baseball. By doing the “let me stand behind you and reach around to guide your hands” move. At night. It’s one of the best “will they or won’t they?” moments in the entire show.

There are some truly beautiful moments in this episode, not least of which is the tableau of Arthur Dales holding the dying Josh Exley in 1947, fading into the elderly Arthur Dales sadly/fondly remembering that moment on his couch next to Mulder in the present.

It is my single favorite X-Files episode for the fact that it centers around baseball, for the beautiful moments between the characters (I seriously tear up at that death tableau every time), and for the messages it communicates – loving something completely (maybe especially baseball!) can literally change us; and things that are unnecessary can still be important and fulfilling.

This X-Files baseball episode gets a 10 out of 10 from me, and I highly recommend it!