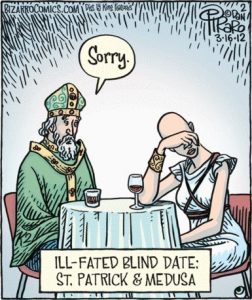 Jason (Co-founder of Nerds on Earth and strong silent type) So tomorrow will be everyone’s favorite holiday. But Arbor Day is still a good bit away, so for this week’s Nerds on Earth chat, we are focusing on Saint Patrick’s Day! Now, how, exactly, are a bunch of nerds going to chat about Saint Patrick? Easy: snakes! Folklore says that Saint Patrick was a hero of Ireland when he ran all the snakes out of the country and it is counted as one of the miracles as part of why he is a venerated saint. (And if things get too crazy we may delve into some other Irish-related nerd stuff!)

Adkins (Co-founder of Nerds on Earth, lacks the luck of the Irish) So anything in all of nerdom even remotely related to snakes is fair game? ‘Cause I feel like there’s a lot.

There are as many snake-themed nerdy people of interest as there are recipes involving shrimp in Bubba’s mental rolodex.

Jason Of course. For some reason, nerds and snakes go together like Cobra Commander and Destro, who is, strangely, Scottish and not Irish. (I’m disappointed.)

Adkins That’s not all you have to be disappointed in when it comes to GI Joe, sadly.

Jason Adkins: We agreed a long time ago not to talk about the exoskeletons.

Adkins You’re the one that got specific.

He was cool at least.

Adkins Interesting. I’ll have to look that issue up! 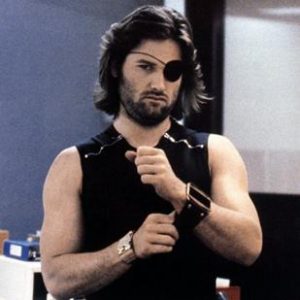 Jason Snake from Escape from New York is one of my quiet heroes. When that movie came out on HBO, I watched it every time it was on as a kid. Can you imagine a movie like that getting made today? It would never happen. Such a trip. Best part of it? The dystopian future that it was supposed to be set in…1997! Let’s all anxiously await the announcement that Michael Bay will get to ruin it as well with a remake.

Jason What do you think makes Snake Eyes so appealing to us all? I don’t know any guy in our age bracket that doesn’t hold Snake Eyes in high regard. 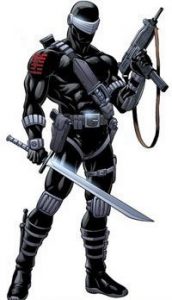 That’s all that needs be known in order for him to appeal to us.

Jason I totally just heard that in the Ask a Ninja voice.

And he doesn’t mess it up with his words. Silence is golden.

Jason But it is confusing to new people. “Wait, the Snake Eyes guy doesn’t work for Cobra?” Someone should have pointed that out early on.

Nash And he wears black and storm shadow wears white…always bothered me.

Jason But these guys aren’t the only comic book guys that are snake related. There are TONS of them, in both Marvel and DC.

Adkins One of my favorite B-Team (and maybe even C-Team) comic characters is snake themed: Constrictor.

Interesting back story, too. A SHIELD agent who goes undercover as a baddie and then has a mental breakdown that cements him as one.

Jason Explain to me what you like about Constrictor, because to me, he seems like a JV version of Whiplash.

So he is full on bad guy now?

Adkins Not anymore, I think…? 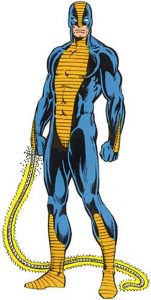 He was part of the Shadow Initiative during Avengers Initiative.  Working for the good guys.

Even registered under the Superhuman Registration Act.

Jason So, he had a Thunderbolts-ish turn?

Adkins So, funny story there: He got the crap beat out of him by Hercules, sued him, got all this money, and another guy just sorta convinced him that he didnt have to be a bad guy anymore.

Jason Marvel definitely loves them some snake inspired characters. Clave did a great job sharing about the Serpent Society, who were iconic bad guys in the late 1980s-early 1990s Captain America run.

Nash That’s a storyline my wife could get on board with lol.

Jason Daredevil would have gotten Hercules off.

So, let’s nerd out on some snake movies. Because we all hate this monkey fighting snakes on this Monday Friday plane! (The television edit of that movie is a miracle of the English language!) Do you have a favorite serpent related movie?

Nash Do the HP movie count will all the snake stuff, slitherin, parsalmouth etc?

Jason Yes. And an interesting addition because it is one of the only examples where snakes aren’t necessarily bad. That is a very contemporary take on snakes.

Adkins Mine is super obvious but no less true: The first Anaconda movie with John Voight, Jennifer Lopez, and Ice Cube.

Jason Obvious but not a bad addition to the snake movie pantheon.

Adkins And the scene that has always stuck in my head has nothing to do with the snake…Its when the wasp gets in the breathing line. Scary as all get out.

That and Ice Cube exclaiming, “They got snakes this big?!”

Jason Cube is always good for a good line. Mine is super nerdy and a bit spoiler-y. The 1980s mini-series V. Reptile related in a scandalous way. I don’t want to say much more but it is worth checking out if you have never seen it. And it happened in an era when it was the kind of show that EVERYONE was watching. Freaked me out big time.

Adkins Does the new version hold up, or no? I only ask because… Morena Baccarin.

Jason No. It doesn’t hold up. At all. I am surprised Michael Bay wasn’t involved in it, that is how bad a remake it is.

So, as you celebrate Saint Patrick’s day, don’t be schlocky and watch the Leprechaun franchise. Be a nerd and find something snake to love and celebrate. He’d be proud.

A Recap and Review of Agents of SHIELD Episode 312: The Inside Man

What I Learned from Reading Every Single GI Joe Comic

The 49 Greatest GI Joes of All Time