A Recap and Review of Agents of SHIELD Episode 312: The Inside Man

After last week’s episode and the introduction of Yo-Yo, will we meet more Secret Warriors in this week’s Agents of SHIELD episode 312: The Inside Man?

[divider] A Recap of Agents of SHIELD Episode 312: The Inside Man [/divider]
First up, we see Hive/Ward and throughout the episode absorbing information, and welcoming the Inhuman from Mexico into the team. Towards the end of the episode, while Malick is away, he has his Inhuman friends bring him 5 humans, which he feasts on, repairing Ward’s body to regular form and shape, while leaving 5 red skeletons and puddle of goo. 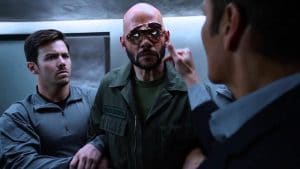 Earlier, Malick had offered to get him a new host, maybe even an Inhuman one, but Hive said “We can’t feed on Inhumans”, which was super creepy. The Hive monster will soon be leaving his cage…

The rest of this issue centers around Coulson and his partnership with General Talbot. As Talbot is saying goodbye to his wife, Coulson meets him at an airport and as they prepare to go away, Lincoln and May attack Creel, aka the Absorbing Man from way back, only to discover that he is Talbot’s bodyguard.

Of course, this doesn’t sit well with Hunter, whose introduction to the series was timed with Creel’s and he reminds everyone that Creel killed 2 of his friends. (Remember when Xena, Warrior Princess, was a brief guest on the show?) This tension never gets released but eventually Coulson says Creel will accompany him and Talbot to a symposium on the alien contagion in Taiwan.

Before they had decided that Creel was going to be on the team, Simmons had gotten some blood and in the testing, it is discovered that it has the ability to reverse the terri-genesis process that starts when an Inhuman is exposed to the Terrigen. This leads to an epic debate between Daisy and Lincoln, as they realize that it could essentially be the start of a “vaccine” for Inhumans. Daisy is terrified of this idea and Lincoln thinks that it may save some people some pain.

At the symposium, Coulson is using a new device that Fitz created, where he can shake people’s hands and another glove that steals that person’s hand print is made. Because of that, Morse, May and Hunter are looking through all the delegates rooms, looking for a spy. When Hunter sees Creel abandon his post, he leaves his job and follows Creel, who winds up knocking him out.

After the Russians propose an Inhuman safe zone in their country, there is a debate and when it comes time to vote, Talbot turns, announcing Coulson as a traitor and everyone is stunned when Malick shows up. There is some discussion and eventually, Coulson and Talbot both wind up in lock-up, when Coulson discovers that Hydra has Talbot’s son and are using him as leverage. Creel shows up to free them and, eventually, he saves Hunter from an assassin’s bullet.

[divider] A Review of Agents of SHIELD Episode 312: The Inside Man [/divider]
This week’s episode is a solid 7 out of 10 nerds.

Some things that need mentioning:

This show does great fight scenes. If you were to go back to season one of those show and compare some of those fights to the current crop, it is astonishingly well done now. We saw it in the fight of May, Morse and Hunter against some Hydra goons and in a sparring session between Daisy and Lincoln.

Coulson and Talbot. I already buy their uneasy partnership more than I did the silly Coulson and Rosalind storyline from the first half of the year.

The split is coming. The tag of the episode was Hunter and Morse stowed away on the plane taking Malick and the Russian ambassador away and it looks like next week’s episode will be birthing their new spin-off show, or at least setting up the premise. And the title of next week’s episode: The Parting Shot.

So what stood out to you?

D&D: How New York History Can Open Our Eyes to the Lore of Dwarves