Each week we watch Marvel’s Agent Carter and are dying to talk about it. The result is us Nerds on Earth writers bantering back and forth via email. We’ll share that here, with the hope that amidst our back-and-forth you end up getting an oddly off-center review of the episode.

Jason,
In lieu talking straight hi-jinks, I thought I’d start the discussion of this latest episode of Agent Carter by being a little thinky, and starting from the end of the episode.

We’ve mentioned this before, but one thing I really enjoy about Agent Carter is how the show is very much a period piece, but it feels excellently modern as well. Old, but new. Out of touch, yet right on time. Tight rolled pants, cuffed jeans. 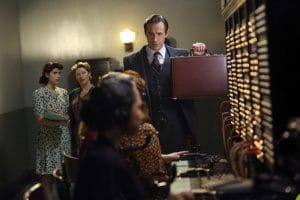 This episode was a perfect example of this paradox. Agents Carter has been able to be a double agent largely because of the sexist mindset of the 1940s. As long as she got the men folk their coffee, they paid her no mind, and she was able to implement her own investigation right under their noses.

The scene where Carter laid this out for the dumb-founded male SSR agents was well done, but firmly setting this show in a 1940s period, while also illustrating that contrast with Peggy’s remarkable competence.

This old, yet modern vibe was true in the violence of this episode as well. First, dozens were gassed to death in a movie theater via a baby carriage that dispersed a chemical weapon. A modern viewer can’t help but connect that scene with the senseless movie theatre violence in our own culture, which gives the scene a very timely rootedness.

But what was missing from the scene was today’s storytelling demanding of “realism” in cinematography and graphics. It was almost as if the scene was shot with the sensibilities of a 1940s viewer in mind, where they wouldn’t dare actually show a real baby, or do a close-up of a broken-jawed corpse, and watch a time-lapse as the chemical weapon burned off a face’s flesh, as a 2015 viewing audience has allowed themselves to become accustomed to.

This is true with the vest bombing scene with the Chief as well. That scene filmed with 2015 cinematography in mind would’ve featured blood splatters that flew back onto the hapless survivors or something. Instead, it was filmed with a 1940s aesthetic, which gave it a very slight campy feel and didn’t zoom in close on any of the violence. It had a very modern feel, yet wrapped in the silly inventions of Howard Stark. The mind of a modern audience would connect with the idea of sleeper cells and vest bombings, but the overall tone hinted at something out of time.

As you can tell by the fact that I’m going on and on, I really like this about this show. It’s both very refreshing, yet doesn’t feel pollyanna in any way. To close this thought, I’m reminded of a recent discussion over the latest episode of The Walking Dead, a show that has gradually ratcheted up the shocking images to the point where nothing seems to shock us about the show and folks are left thinking ‘meh.’

Egads, this email is a preachy bore! Save me by commenting on the hi-jinks of the latest episode!
Clave

Clave,
You are making some great points about storytelling and how they are making it work in the aesthetics of the show. 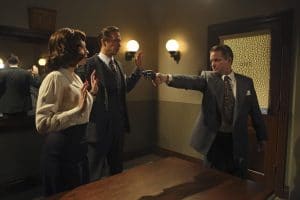 First, your point of the old setting being a commentary of the current world in spot on. It doesn’t rise to the level of Battlestar Galactica’s reboot and its commentary on the war on terror, but it is doing some nice work. And the choices that are being made work well like you said, shooting and showing the videos from how it would be shown in that era.

That is a level of depth that is amazingly well done and well thought out. And it only adds to the richness of the storytelling. Shock and awe aren’t needed commodities to tell good stories!
Particulars of this episode:

Other random thoughts I am having: Black Widow was trained by Leviathan? Think we will ever meet Phil Coulson, Sr.? Ant-Man I is old in the movies, played by Michael Douglas. Any chance of an Ant-Man cameo?
Jason 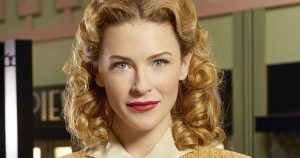 I don’t have much to add other than 2 quick things:

Characters You Should Know: Who is Aaron from The Walking Dead?