After last week’s atomically-themed episode, this week’s first of two new Agent Carter episodes features the return of Dottie! As you watch this week’s episode, follow along with the chat below. All you folks who watch shows time shifted, we’ve got your back.

Jason After the big wounding of Peggy last week, what is in store this week for our new formed ragtag team as they try and stop Frost and restore Jason? Here we go, chatting through Agent Carter episode 206: Life of the Party.

Jennifer Peggy can do anything…no matter how wounded.

See, she can even walk!!

Jason Again, paralleling two couples early on: Jason and Peggy working to give him a body again and then the senator trying to help his wife. (Or is he?) 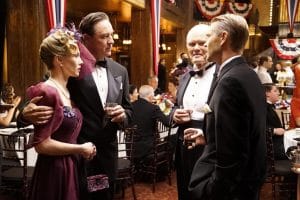 Jennifer The senator is shady but so is his wife…

Jason Drunk Daniel hair is an odd thing. And now Peggy and he are going to a dance!

Jennifer And both aren’t the best dancers at this point…

Jennifer I love it!

Jason Interesting choice here: bringing in the former Spy from Russia, who I would make the woman who trains the Black Widow eventually.

By the way, Peggy’s wig…I ain’t feeling it.

Jason Definitely not the best wig we have seen her rock.

Hey! There is Mrs. Jarvis! I just had the wrong role for her. But Jason needs to work on his pep talk skills.

This exchange between “Dottie” and Peggy is great. They are both so sassy!

Jason I love the way they do retro spy gear on this show. It is cool and time period believable, which has to be a hard combination to pull off. Magnetic lock deal and an early version of the taser gun. Very cool. 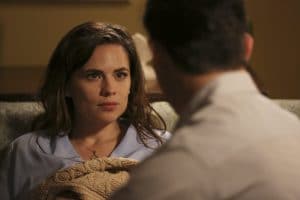 Jennifer It goes so well with the costumes and set designs. They get it all right!!

Jason It is the details like that that move the show from good to great to me. The whole package. (And I want to see Jarvis taser net Bernard the Flamingo in the season’s last shot.)

Jason Well, that wasn’t subtle on the product placement.

Jennifer Dottie’s face during all of that was perfect.

There are so many ways this could go poorly.

Jason And that is certainly a big one. Chad Michael Murray always ruins everything.

Jennifer Yes. yes he does. And he makes me angry.

As if the plan couldn’t go awry without him.

Jason Well, we knew Dottie would go rogue. Now we just need to see how rogue.

Jennifer You can do this, Jarvis. I believe in you.

Jennifer And she has gone fully rogue…

Jason And she is about to get a glimpse of what Frost (and her blood) are capable of.

Okay, that reaction to her forehand was a little too over the top. We’ll have to end on that.

Selected Quotes from the Wikipedia Page of Patrick Rothfuss