At the end of the last episode of Agent Carter, we wound up with Dottie Underwood in the hands of Whitney Frost and Jason slowly moving more into his incorporeal form. Now we’ll recap Agent Carter episode 207: Monsters.

Our erstwhile scientist Jason is slowly fading, suggesting that he knows the issue is something worse than dying, but he won’t elaborate to Peggy. Eventually, they do manage to bring him back to form in a stasis chamber. And when he realizes he is solid, he lays quite the kiss on Peggy, who responds in kind as the Mr. and Mrs. Jarvis watch.

Mrs. Jarvis goes to cook Jason a meal and the team return to find Dottie, whose necklace was suddenly reactivated. Peggy explains to Jarvis that she knows it is a trap.

We have a touching scene where Mrs. Jarvis explains that she knows that Jarvis needs his adventures but she needs to be okay to be worried. Jarvis then demonstrates his new toy, a 170 degree wide concussive cannon called the Jitterbug. 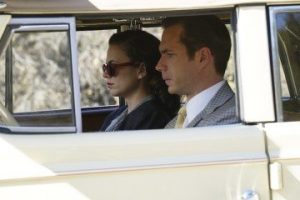 On the way to the ambush, Jarvis is wanting to talk small talk about Peggy and her recent amorous endeavors. It leads to a great character building conversation where Peggy reveals that she didn’t mean to entrap the feelings of both Sousa and Jason. But as Jarvis so eloquently puts it to Peggy: “You underestimate your allure.” But it will have to wait until after the mission is over.

When they arrive, Jarvis keeps pushing in a code and the Jitterbug doesn’t work. So he, Peggy, and Dottie wind up captured and are working their way to freedom when Jarvis realizes that he put the wrong code in and it was the time delay.  As they are running away, they realize the terrible truth: the trap was to lure them away from Jason, and his host, Mrs. Jarvis.

When they arrive, Jason and Whitney have an encounter and dark matter moves back and forth, with Jason being now able to hold form even away from his stasis chamber. As they are taking him away, Mrs. Jarvis goes to intervene and Whitney shoots her. And when Jarvis rolls up with Peggy, you see both his heartbreak and his anger.

At the hospital, Mrs. Jarvis is whisked away and there is no promise of her full recovery. A police officer foolishly opened the trunk that Peggy had warned him not to, allowing Dottie to escape.

Daniel Sousa, having earlier mouthed off to Vernon Masters, is beaten up in his own house. When he drags his broken self into the SSR LA office, Vernon Masters tells him that he is assuming leadership of the office, which is why when Peggy calls the office, Masters is the one who answers the phone when Peggy asks for “The Chief.”

She hangs up, walks over and quietly puts her hand in the hand of her friend Jarvis as they await word about his wife.

[divider]Review of Agent Carter Episode 207: Monsters[/divider]
An excellent episode. A 9 out of 10. Every significant plot moved forward:

Selected Quotes from the Wikipedia Page of Patrick Rothfuss

Getting Up to Speed on Agent Carter Season 2