With the release of another new trailer for Captain America: Civil War, you can’t help but wonder how the Marvel Universe will be changed at the end. If you have read the comics, there are several possibilities that are out there as potential major shifts.

And because of the announcement of an Agents of SHIELD spin-off, I am here to propose that Marvel make a major investment in a character: Agent Carter. Agent Sharon Carter.

Originally, Sharon was introduced into the Marvel Universe as Peggy’s little sister but over time, that math doesn’t work and now she is held up in the comics to be Peggy’s niece. What is interesting is that they have already introduced her in the Marvel Cinematic Universe, as she was played by Emily VanCamp in Captain America: Winter Soldier, as Steve’s neighbor, who turns out to be much more. 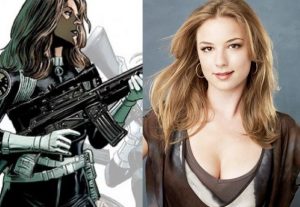 Based on what we know of the upcoming movie, VanCamp is reprising her role in the movie and potentially could play a much larger role. We aren’t sure what that will look like and how it will end.

But regardless of the direction that they took for the movie’s ending, it is an opportunity to integrate VanCamp into one of the SHIELD shows. (Especially since they can’t seem to figure out how to do that with Maria Hill, who should be a regular by now but strangely isn’t.)

With Bobbi Morse being cast as the lead in the spin-off, Agent Carter joining Coulson’s team could seem like a no brainer. It gives that cast another strong female lead, both in story but also in acting.

VanCamp has some serious acting chops and was on television series for many years. That is part of what makes me think she potentially a great asset for the SHIELD show in ways that major movie stars like Chris Evans could never be.

The tension could be increased by making her a new liaison in charge of overseeing Coulson and his team coming out of the Slovakian Accords. That could create some tension in an interesting way and continue to build on the house divided theme of Civil War.

Of course, that could go sideways if one of the outcomes with Coulson’s team in Civil War is that they become outlaws. Then Carter could be used as either a new recruit to Coulson’s team or as a Tommy Lee Jones in the Fugitive type figure, just doing her job in trying to track them down.

You could also place Sharon Carter in the new spin-off. The working title of that show has been Marvel’s Most Wanted. The logical assumption is that this team is going to be tracking down heroes who don’t want to comply with the post-Civil War situation.

In that case, you could easily turn Agent Carter into that show’s Coulson. VanCamp has the acting chops to take on that lead role, which to be honest, I have feared is lacking in the cast so far. It would provide a deeper cast immediately and give the show some direction that it might otherwise lack. And Sharon Carter’s experience with Captain America and his friends means that she will be fully versed in understanding superpowers, heroes, villains and the consequences.

Lastly, it gives a chance to do the occasional pop-up with old Peggy Carter, telling stories to her niece, which basically could be the frame for future seasons of Agent Carter, and gives that series the freedom to tell stories out of time order, which is a unique opportunity for that group of creatives to pursue.

So, c’mon Marvel. Give us some more Agent Carter, Agent Sharon Carter!

My Hopes for the Deadpool Movie (and Some Fears as Well)