After last week’s reveal of a live, if incorporeal Jason Wilkes and an underlying conspiracy, how will Agent Carter deal with what is next? And who will stand in her way, especially in the SSR? And what is happening to Whitney Frost?

Jennifer Okay, I’m here and ready for Peggy to kick some butt.

Jason Yes! Television’s best show is up and running.

Jennifer If this is little Peggy, I’m gonna die.

It is little Peggy…

Jason Jason. They have to fix him before the season is over. Such a sad current state.

Jennifer It is very sad. He’s cute, smart, funny…I need him to be solid…

Jason What an interesting reveal on Frost. A genius lady obsessed with her looks. And it isn’t going to end well for those mice. At all. 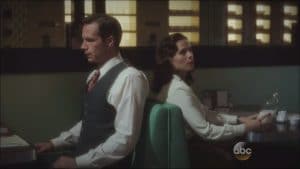 I do have to say, I really love Jarvis and Peggy working so well together.

Jason Best dynamic duo right now. Love their energy and the way they work together. So unexpected last year and it has only gotten better.

Jennifer Agreed. And they have a great friendship chemistry.

Jason And now I want a web series of Jarvis Koala hunting.

Jennifer With the flamingo running around behind him.

Jennifer I really like this. Both such smart little girls and going against the grain.

Frost is an amazing actress. I’d be sweating bullets.

Jason I want to know the science of this. If she eats 100 mice does she reverse age? And how young?

Jennifer She just gets a larger crack in her head.

Oh, Jarvis. You just can’t win, can you?

Jason That was a weird scene with a great ending. Magnificent face fall. 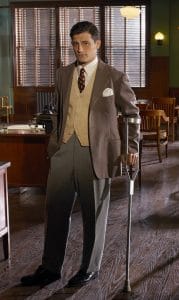 Jason Still love Sousa. I am not sure who I like more for Peggy long term. Since Steve is frozen and all.

Jennifer Well, she does need to get married and have kids. I just like her so much by herself.

Jason I predict big things for Sharon Carter. I have a theory I will lay out soon about how she is going to be prominently featured on Shield next year.

Wow. That flashback was unexpected.

Jennifer Seeing Peggy’s beginning is really cool. I like seeing her so young.

She gave him a cold. An intense cold.

Jason This episode is really moving along quickly. I don’t know if it is the back and forth with the flashbacks or what but it is moving story-wise.

Jennifer I was just thinking that. I’m really liking this season so far.

Jason I think this show really benefits from a shorter season. Whereas a show like Shield feels like there are a couple of episodes where it stalls and drags, this show can’t afford that. The writers know it has to movie.

Did you know the show runners for this show are writing the new Captain Marvel comic? It is getting super reviews so far.

Jennifer I really like how American shows are finally jumping on the British bandwagon. Shorter seasons means better stories.

I’m so excited about that!

So, in regards to that flashback, I felt a big “Carrie” moment.

“They’re all gonna laugh at you!”

Jason It did have an odd dynamic.

Council of 9 feels a bit like Hydra to me.

And yes, I agree with the Hydra feel.

Jason All these dapper men with shotguns. This show nails the costuming. So great.

Jennifer Yes. And Peggy in the colorful clothes and the men in drab coats….yes, let’s look at Peggy. She’s the coolest person there.

Jason There should be way more Agent Carter cosplay.

Jennifer I saw a few at DragonCon this past year. And they were spot on. Blue coat, red hat, saucy walk. Perfect!

I don’t trust this guy. At all.

Jason Yeah. He is bad news. And that informant is going to end up dead.

Jennifer And I’m scared Peggy is gonna get Red Listed.

(named as a communist. Haha, I need to brush up on my history)

Jason That does feel like it is hovering above the show and future seasons.

And that is being a great older brother…giving her eyes to see what she cannot. Powerful.

Jennifer Yes. That was a great flashback. We were all screaming what he was saying.

Jason Sousa! Such a great character. Helps make the show have a depth it might lack otherwise.

Jennifer Peggy can take a punch better though. Haha.

Jason I bet Jarvis is quite the mixologist.

Jennifer I need him at my place… 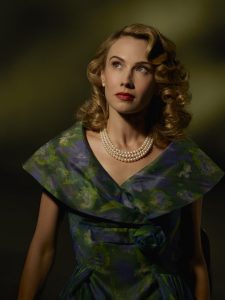 Oh no…I see where this is going…

Jason Certainly gives some depth to Peggy’s commitment. Heartbreaking though. What will Frost’s equivalent scene be?

Jennifer I was wondering just that. Because Peggy’s heartbreak makes her stronger.

Jason The Senator is about to discover the Mrs. has some new tricks.

That agent had a crustache. Just by the way…

Jason No. She was in Ant-Man! And Winter Soldier!

Jennifer It was just a clone!

She dies! I know it!

Jason Good episode. The flashback pieces were unexpected and do give some depth to both the major characters of the season. I like that dynamic and the contrast: one moving away from the expected societal norm and one moving closer to it.

Jennifer Agreed. Not as many fight scenes as other episodes but I liked it! It really gave more depth to our characters, including Whitney Frost. I’m still on board for this season. I’m liking it a lot!