[divider] What are your favorite video game songs? [/divider]

Adkins (Co-founder of Nerds on Earth and button masher) Today on the Weekly Nerd Chat, we’re going to offer up our choices for favorite or most iconic video game songs. Morgan has already graced Nerds on Earth with a post highlighting her seven favorite video game soundtracks of all time, but which stand-alone song is your favorite, guys?

Nash (Not willing to pay $.99 for a nerdy text tone) Well, I certainly do not have the wide range of gaming as you two, but either way I think it always goes back to nostalgic stuff for me. So that undoubtedly has to be the original Zelda theme song!

Adkins Definitely a major tune. They basically took that and revamped it for several of the other Zelda titles, didn’t they? Ocarina of Time used it for sure.

Nash The Legend of Zelda is absolutely my fav. I like all the games and soundtracks, but something about the original one…takes me back to a simpler time!

I think the music is Zelda is such a major part of the franchise.

Ocarina of Time emphasized it well!

Morgan (Barely tolerates Adkins and Nash’s lack of music theory) The music from Zelda is so well done. Ocarina of Time pays homage to a lot of old themes and just does such a great job with it. The music is what makes me wish I got into Zelda.

Adkins What I really dug about music in Ocarina of Time: It becomes interactive! You play six short notes on Link’s ocarina and a whole song unfurls. You play it! Very cool mechanic. 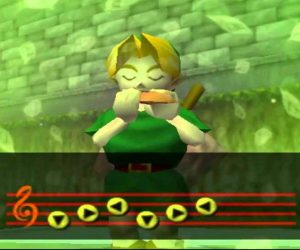 Such a happy little ditty.

Only you didn’t have to keep time or rhythm; you just had to get the sequence right.

Adkins What about you, Morgan? I know this task is a bit more daunting for you since music is definitely a huge passion of yours, but do your best!

Morgan It really is! Because I was sitting here thinking I was for sure set on a song, but then I was like “OH but this one! NO WAIT! This one!” There are so many factors to me that make an iconic song especially for video games. Does it tell the story, does it make you emotional, instrumentation, etc.

But for this I think my decision is based on if I can listen to this song and always get goosebumps and it never feels old. It comes down to Kingdom Hearts “Hikari Orchestra” theme that was used a lot in the trailer. It used the iconic melody of the popular song used “Simple and Clean” but it also just tells such a story with great dynamic.

Adkins I’m unfamiliar with the tune. Does it have lyrics, or is it purely instrumental?

(I’m looking it up even as you prepare your answer)

Morgan It doesn’t. “Simple and Clean” does. But this is purely instrumental.

Adkins So tell us, then, about the elements you mentioned earlier when it comes to this song: story, emotion, instrumentation…

Morgan All of it! With this song, it uses the important melody that is featured multiple times throughout the game, mostly when something big story line wise is happening. Your main character Sora is dealing with being separated from his world by the darkness and everyone he cares about is stripped from him. But as he fights the darkness and gains new friendships.

It’s a long story, if you haven’t played the game before I recommend it! It has Disney elements but Final Fantasy feel. The instrumentation is on the epic side with full orchestra which plucks my heart strings.

Adkins Just listened to the whole thing. Definitely a dynamic tune! And while I’ve not played any of the Kingdom Hearts games, I have seen gameplay footage a few times. It wasn’t difficult to paste this song overtop that footage and have it click. Very cool!

The song that immediately came to mind for me was “Truth and Reconciliation Suite” from the Halo series.

It played during title screens, during matchmaking, and even during gameplay. It was everywhere, and because I played the heck out of that franchise in high school and college it rings mightily in my head.

It is orchestral like your song, Morgan. And it has a very epic feel to it.

Morgan Halo has gorgeous music! It’s really well done. I’ve never played Halo so I was never sure on what influences were supposed to be center focus. It has a lot of worldly influences, in melodies and instrumentation. It’s just overall interesting to listen to.

Adkins So let me ask you two a question:

All three of our submissions contain no lyrics. Can you guys think of any major video game songs out there that do?

Nash I cannot think of one that contains lyrics.

Adkins I’m having a hard time coming up with one myself. If any of us knows one, its Morgan for sure!

Morgan Yep! Dragon Age Origins. Most of the lyrics are not in English though.

Adkins What are we talking then? Elvish?

Morgan Also Dragon Age Inquisition had bard songs written in English, and made for the game so whenever you walk into the tavern, that’s what you would hear.

Adkins That is a pretty interesting thought on behalf of the creators.

Morgan Also Fallout 4 did that when you walk into the Third Rail. Lynda Carter’s band (yes, Wonder Woman has a band) plays songs they write for Fallout 4. It’s pretty great.

Adkins Okay, so to close this down…Be honest…Have any of you ever used a video game sound byte (even just sound effect, not necessarily a song) as a ringtone or text tone on your phone and if so, what was it? 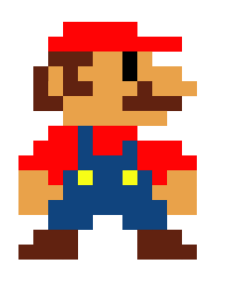 I once had a number of NES Super Mario Bros sounds as my text tones at one point.  Coins and jumps and mushrooms, oh my!

Nash No. But only because I’m a miser and you usually have to pay for those right? lol

Morgan I use to have a Super Mario sound effect when someone texted me. I have a Dragon Age song as my ringtone.

Please share in the comments what your favorite video game songs are!