[box] We watched the Marvel’s Agent Carter second episode and were dying to talk about it. Us Nerds on Earth writers will often banter back and forth via email, giving our first thoughts about the latest comic TV show we’re watching. We’ll share it here, with the hope that amidst our back-and-forth you end up getting a good review of the episode, even if the style is slightly off center. 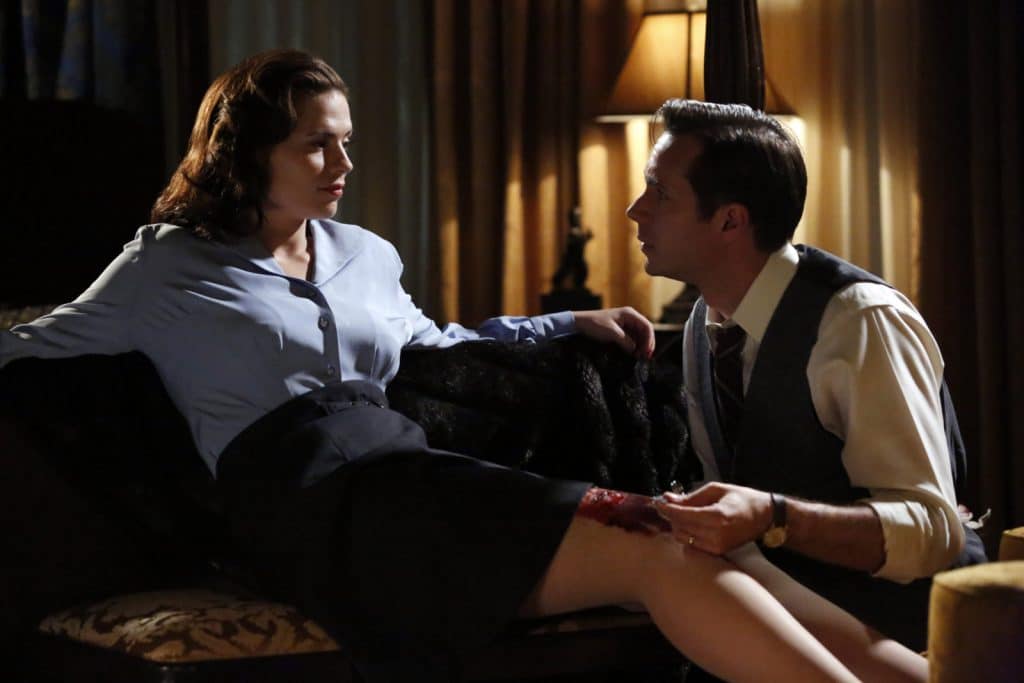 A quick recap of the episode: As Agent Carter searches for the truck with the weapons, agents interrogate Miles Van Ert, the Roxxon scientist who made the weapons, and learn of the truck’s location as well. Agent Carter and Jarvis arrive first, and find Leet Brannis. They are attacked by a man who works for Leviathan, the organization that Brannis has betrayed. Carter fights the man, who still manages to mortally wound Brannis. The truck careens off a cliff, and the weapons inside implode. Before he dies, Brannis draws a symbol in the dirt. Agents Dooley, Thompson, and Sousa later arrive to find woman’s footprints and a hotel key. Meanwhile, Agent Krzemenski, sifting through the remains of the Roxxon refinery, finds the license plate for Stark’s car that Jarvis was using. 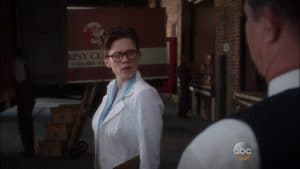 I think I might even be more enraptured by Agent Carter after the 2nd episode! With the milk truck scene, this show reminds me of the fun stuff from Alias, which I like. If they put Hayley Attwell in a different disguise each episode, I’ll be pleased.

Related, I was watching the show on Hulu and as is true with Hulu, they showed the same one commercial, but played it 1 million times. The commercial showing during Agent Carter starred Jennifer Garner of Alias fame. Coincidence? I think…probably. But still, I needed to point that out because these posts need to be 600 words minimum.

I also think the goofy typewriter tech is fun, but what I really liked about the episode was the radio show that cut in throughout and further tied Agent Carter to Captain America! It was so cleverly done, and further illustrates both the throwback nature of the show and also how Marvel injects lighthearted elements into their properties.

I have two things to say about the radio show, then I’ll hand it off to you to share your thoughts on the episode:

This is the internet, we need to turn this into a thing. I’ll start. Every time someone in my family says something, I’ll only respond with “Slap that ham!”, then I’ll giggle like a junior high boy.

“What shall we do for dinner tonight?”

Agent Jones,
I am all for the disguises and outfits. I hope they do re-occurring ones though. It would make some Marvel-like comedic moments for sure. Plus, the different accents. I am pro-multiple accents in any context.

On the Hulu front: mine are always credit score ratings. So, not sure what that is all about. But if anyone wants to send money to help get mine up, I’d gladly accept donations.

The Captain America Adventure Hour was awesome storytelling as they weaved it into the story. Really smart way to tell a story, end well but also give Carter a chance to reply to the absurdity of it. And man, I would TOTALLY subscribe to the Captain America Adventure Hour podcast! And Coulson for sure has them all. Probably used to use his high level SHIELD clearance to use Napster to download them though.

“Slap that ham” is now a thing. I can’t wait for it to catch on. The crushed crab for the breaking bones was pretty funny as well. You think they use those tricks off camera on other shows for sound design? If so, it is kind of cool to watch the behind the scenes work.

Again, loved the interplay between Carter and Jarvis. And I love how he isn’t ever going to really pull her out of trouble, but offers just enough adjacent help to make it work. For instance, had he smoked that guy with a shotgun and said “A gentleman always knows how to hunt foxes” I’d have believed it. But it would have changed the dynamic too much. 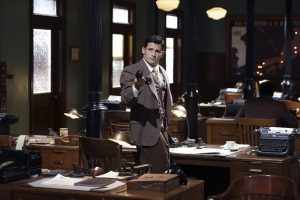 Agent Sousa is coming around, and I like where he and Carter’s relationship could be headed.

Thing I am most excited about moving forward: the wacky shenanigans Carter does and the the trouble she will get into with the House Mom. That is going to be pure comedy gold.

And props to Hayley Atwell: she is crushing the fight scenes (They took what they learned from Season One of SHIELD and aren’t making the same mistakes) and the comedy pieces as well. So the license plate? Does it unravel everything? What else is in Mr. Stark’s closet? I’d love for that to the wardrobe of undercover disguises for Carter. (Side note: Love that they haven’t tried to make her have some kind of special costume. Love it.)

Slap that ham and tell me what else you think.
Jason 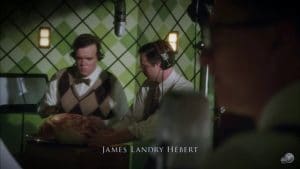 So glad we are in agreement on this show. It has been a solid first 2 episodes, which really get me excited for the coming weeks. I can’t say enough great things about the overall tone and feel of the show, and I fully concur that Hayley Attwell is killing it as the lead.

One thing you brought up that I hadn’t considered is if Stark’s closet becomes the reoccurring source for her outfits. That could be a fun week-to-week gag.

Before I leave, I just want to slap that ham one more time. I think the license plate reveal takes Jarvis out. My guess is that he gets picked up was the prime suspect, which gives the story a turn as Agent Carter works to both exonerate Jarvis while also unraveling the core mystery.

Click here for our review of the Agent Carter premiere episode.