[box] We watched the Marvel’s Agent Carter premiere episode and were dying to talk about it. Us Nerds on Earth writers will often banter back and forth via email, giving our first thoughts about the latest comic TV show we’re watching. We’ll share it here, with the hope that amidst our back-and-forth you end up getting a good review of the episode, even if the style is slightly off center.

OK, right of the top, I apologize for shoe horning that 1940’s slang into the above sentence, but considering it’s a period piece, I couldn’t resist. I also will likely do it again, as I found a whole list of 1940’s slang.

I REALLY love what Marvel has done with this show! The opening that used scenes from the first Captain America movie was a swell move. It immediately tied Agent Carter to the greater Marvel Universe, but on the other hand, no one is going to think this show is anything like what Marvel has previously done. It’s fresh, original, and breaks the formula Marvel is using with the contemporary 616, yet it still feels very Marvelesque.

I’m now going to hit you with a flurry of bullet points, cause there is a lot about this show I’d love to hear your thoughts on:

I’m going to stop because I want to hear what you thought of the premiere. I loved it, and I’m going to watch the 2nd episode as I await your email reply.
Clave

Clave,
Let’s flap our lips! I cannot tell you how much I loved this first episode and we agree on so many things.

Things I would throw back at you:

So, what do you think about the creepy Leviathian? Will they all have no voiceboxes? That does creep me out, I’m afraid.

What other connections will we see? We know SHIELD Agent Tripp had a grandfather who was a Howling Commando and tech specialist. Will he pop up? Will a young Nick Fury show up? And who winds up being the mom to Iron Man? Very little written or done on that that I know of and it is a story they have the chance to tell here! (Maybe? for the first time?)

Back to you,
Jason

Jason,
Glad we both enjoyed the premiere episode. Related, I like that the series will only run for 8 episodes. It makes for a tight story with no fluff.

Had you not liked the episode I was ready to give you a knuckle sandwich using Agent Carter’s fighting skills. I never saw the short, but from what I understand, at the close Howard Stark asks Carter to head SHIELD. Clearly, the TV show must be a prequel to the short, and we can think forward to see how her skill in hand-to-hand (among other things) made her a great choice to lead. 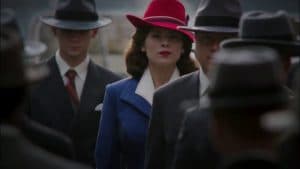 I’ll close with supporting characters. Jarvis is such an interesting one in the comics, and I’m so pleased with how he was portrayed early. His call to close the episode was interesting. Clearly there is another mystery left to be solved! I must admit that I didn’t Enver Gjokaj when you told me and I had to look him up. I now realize I lost a nerd point with you. Finally, I’m pretty sure the waitress was one of the blondes who were shown on a boat with Stark, but I could’ve been seeing things. Still, I doubt her story is a red herring. Expect a twist to come soon.

That’s all from me. I’ll let you give us a few closing words on this episode, as I’m ready to talk about the 2nd episode already!
Clave

8 episodes is a great choice. Remember season one of SHIELD where they stalled out. Some of that was having to wait for the Hydra drop in Winter Soldier. But some of it was just stalled out story telling. They should have a great arc and leave us wanting more. Which is what we need and want!

No worry on the Gjokaj nerd point. He is clearly a Whedon clan favorite, with his best work happening in Dollhouse. When he showed up, I knew there was more to his story.

That phone call was interesting. It should be nice to see how it plays out in the coming episodes.
On to episode two, which thankfully, we don’t have to wait on. Glad they dropped 2 at once.
Jason

There you have it. Agreement that the premiere episode of Agent Carter was a blast. We give it 7 and a half out of 8 Nerds.