So after last week’s Walking Dead (episode 510) full of individual moments and small group discussion, we ended on the bombshell of the clean, new guy showing up: Aaron. (Note to readers: When I started watching the series, I had read some of the comics. We are now at the point well past what I have read. So know that my speculation is just that: speculation. Clave will occasionally be chiming in with pieces like the one he did about Aaron from the comics. Which I have not read because I want to be surprised!)

What follows is our Walking Dead episode 511 “The Distance” recap and review.

The crew are all chilling in the barn when Maggie and Sasha bring in Aaron. The thing that stood out is how immediately all of them drew down, grabbing weapons, etc. (These people are never going to be able to make friends again!)

Even the handshake offer draws the near ire of the crew.  Aaron explains that he wants to introduce the crew to the community, where he thinks they should come and join. Aaron gives Rick some pictures of the community, starting with the walls surrounding it. But as he starts talking about the next picture, Rick delivers a devastating right cross.

(At this point in the episode I am torn. Do I want to believe Aaron because his clothes are clean? Because he is articulate? Because he has a dance troupe? I am not sure. But I know I was super frustrated when Rick decided to go Manny Pacquiao on him.) 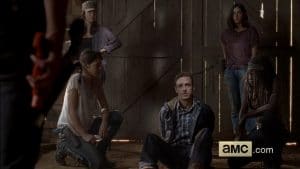 Michonne seems to take issue with Rick’s punching him, as they secure Aaron, start a perimeter watch and dump out Aaron’s pack.  Sasha and Maggie point out that he could have done harm to them if he wanted.  Rick takes issue with Aaron’s flare gun. Aaron points out that whatever he says won’t matter. He reveals that he was the source of the water, and that they want them to join the community because they are survivors, never turning on each other even with a lack of food and water. Aaron says he can get in contact with his one partner and they can all drive to the community so that he can show them.

Aaron’s ask of their trust is met with Michonne saying that she needs to go and check out the car. Maggie agrees. They basically overrule Rick, and Glenn says that he will join as well, recruiting Abraham and Rosita as part of the search group. Darryl takes high post watch and everyone gets to positions to cover the barn, leaving Rick and Aaron alone in the barn.  Aaron says he used to work for an NGO and has stared down bad people, saying that the group aren’t bad people. Rick says that just because he is good people doesn’t mean he won’t hurt Aaron, promising to put a knife in the base of his skull if the search group aren’t back in an hour.

The search party has a debate about shooting first and asking questions later. Michonne starts pointing out that the group hasn’t always been that way.  I think this is one of the best short scenes. Because what we have is Michonne reminding the group of what they were and the chance to go back to that state: rescuers instead of just survivors. It doesn’t seem to gain much traction but I think it is pointing out that the group, if they aren’t careful, could lose their core selves and identities.  The litany of who they have saved was a pretty good reminder of that.

Aaron and Rick have a showdown over applesauce, which had to be the strangest conversation ever. Aaron doesn’t want to eat it because he doesn’t like the applesauce and we get some backstory of how his mom made him eat foods to be more manly. But he finally does and Rick feeds Judith with the non-poisoned applesauce, reminding Aaron that he has 43 minutes.

The search party finds the car, along with an RV, just where Aaron said they would be, blocked from getting closer because of damage from last episode’s storm.  Walkers comes out of the woods and Abraham and Rosita dispatch them and they then enter the RV, which is empty.  Abraham is overjoyed by the spaghetti os. (He and I could party. One of the best Christmas gifts ever was a case of them!)

The search team takes the vehicles back to the barn. Michonne takes the reigns of leadership, saying that the time to believe Aaron is now, that they all need this. Aaron wants to drive and there is a showdown about directions. Ultimately the group is going to go at sundown, as Aaron is unwilling to just give them the directions.

Michonne and Rick have a conversation, where she questions him about how and why he is playing it. Rick points out Woodbury and Terminus were not the best “safe” places. He says that he need to see it up close before he will be willing to bring his family inside it.

The night drive is rolling with Glenn, Michonne and Rick riding in the sedan with Aaron. Michonne gets ahold of the pictures of the area, when she suddenly gets concerned because there are no pictures of the others.  She then asks him “The Questions”:

As he is answering them, they run headlong into a mass of walkers, covering the windshield and car with blood as Glenn plowed through.  In the midst of it, they have lost contact with the RV.  But the car. won’t. start. Michonne gets on body removal duty, clearing zombie goo from the radiator.

Just then Aaron sees a flare and enters full on freak out mode, running into the woods.  As they trail him, they are being surrounded by walkers.  In the chaos that ensues, Glenn nearly dies before discovering Aaron, still bound. Glenn saves him, cuts his hands loose. Aaron then quotes Glenn back to him: “we can make it but we can only make it together.”

Rick and Michonne are fighting the zombies when we get the best kill of the night: flare gun to the face.  Glenn and Aaron come out to save their hides and then they all walk on foot to find the others.  Aaron is really concerned about Eric, who is laid up with a broken ankle. We quickly learn why: Aaron and Eric are romantically involved. After some romantic banter, Eric gives Aaron a license plate, which we saw earlier that he had been collecting.

Aaron thanks the survivors for saving Eric and reveals that they are headed to Alexandria.  But Rick is still suspicious.  Glenn intervenes, reminding Rick that Aaron has only been truthful, they are unarmed and that Eric has a broken ankle. Rick relents and will let Aaron stay with Eric for the night before they head out in the morning. 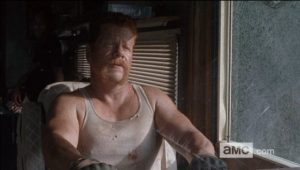 As they hit the road the next morning, Noah and Aaron have a conversation, with Aaron giving Noah some hope about his limp, with Surgeon Pete in Alexandria.  Rosita and Abraham have a moment as they drive near Washington DC.  But the battery on the RV dies.  Glenn shows Abraham where the other battery is, which provides a nice call back to earlier seasons with Dale and his RV.

Michonne tries to talk Rick into the reality that “the fight is over.” Rick seems unconvinced, talking about how the rules keep changing.  Michonne offers him hope as the RV comes back to life.  Rick says he needs to take a moment.  As he wanders upon an old house and a piles of rubble, he hides a handgun inside a Ninja blender.

As they drive upon Alexandria, we get a close up of Rick’s eyes. The silence he was expecting based upon his experience with Woodbury and Terminus, is instead met with the sounds of children laughing and playing. Michonne asks him if he is ready and they exit the car. He picks up Judith and Carol affirms him for doing all he did to keep them safe.

I have to say, I have hope for the show again. Two weeks ago was a trainwreck to me. Last week, we saw some needed character development. And this week, we see some real movement in terms of direction and plot.

But, as much as I hate to say this, we will see that blender handgun again. How and when is what will be interesting.

Oddly, one of the things that I thought this episode was great at is the use of cliffhanger moments into commercial breaks.  In the early seasons of the show, the writers were especially adept at using this to create tension and for whatever reason, they found that mojo again for this week’s episode. It creates a sense of tension obviously but also a sense of movement as well. I hope they can continue to use it as well as they did this episode.

Michonne coaching Rick to return to normal was a great plot device.  She has been where he is and she knows the way out; it was a reminder of their trust of each other and her growth as a character.

Next week, I am curious to see if Alexandria is as good as it seems and how everyone adjusts.  What new characters will be introduced?  How do the writers keep the issue that has haunted the other long term places: the prison, the farm?