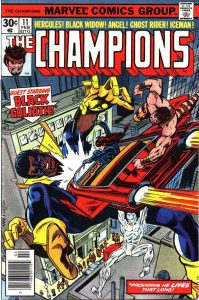 One of the nice things about the Marvel Unlimited app [our review] is that it gives you access to some great older comics that might otherwise be hard to come by.

When we were talking over our Avengers teams [our lists], I made a joke about taking the West Coast Avengers original line-up, then declaring it done.  That somehow triggered in my mind that I had never read the 1970s comics of Marvel’s first west coast team: the Champions.  Then I checked the Marvel Unlimited app: The whole run is there.

[divider]Comic Review: Marvel’s Champions[/divider]
First off, this comic is VERY 1970s but I think in the best way possible. Notably, when they formed this team, it had to have been random draw.  I almost think they drew the team and then dared each other, leaving writer Tony Isabella with the challenge.

Check out this line-up:

As you can see, that is an oddball cast and crew and yet, it works.

The first arc of the team is definitely odd, with all of them being on the UCLA campus at the same time for different reasons.  (You want to know what a Russian superspy does for a pay check after a bad break-up? She tries to get an adjunct job teaching Russian at a major university!) Once they are all on-site, their first battle is with rogue god Pluto, who is trying to trick Hercules into a marriage.  It is such an odd storyline and, yet, I enjoyed it.

And like I said, reading this is a reminder of how much comics have changed. You get odd panels, like how after they have lost the first battle with Hercules disappearing in the midst of it, they retire to discuss it.  While sunbathing.  As one does.

After the initial gathering, you see the team really come together, with multimillionaire Angel financing the operations, other members joining, like Black Goliath, who served as the science guy every team needs.  You get different plotlines storming out of each of the character’s histories.

Hercules starts it with the battle with Pluto. Widow’s Russian roots show up when the Crimson Dynamo attacks, which ends with a Cold War era defection of a superhero!  You see them build their own base and their own custom aircraft (the Champscraft! I love the 70s!)

All in all, this was a great, enjoyable read for me. I am sure that to many modern readers, some of the sensibilities of the era could be grating, but I think it is a nice look into a bygone era. If you have to backbin dive for these at the local shop, it would probably be quite a hunt, but with the Marvel Unlimited app it was a breeze!

The Black Widow Movie, a Kernel of Corn, and What I’m Doing to Survive COVID-19