Each week we watch Marvel’s Agent Carter and are dying to talk about it. The result is us Nerds on Earth writers bantering back and forth via email. We’ll share that here, with the hope that amidst our back-and-forth you end up getting an oddly off-center review of the episode. 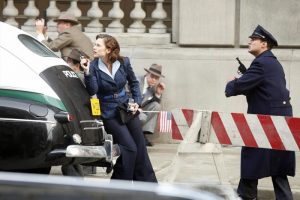 When I took the assignment of starting off this week’s volley, I had completely forgotten that this episode is the season finale! I have loved this show so much and can’t believe that we are already at the end of season one!

But let’s be honest: when they opened on the radio show, all I thought was “Somebody is slapping some ham!”

So, Midnight Oil is quite the nasty chemical concoction. And though I haven’t been a fan of Howard Stark, I do like the way his character is used in this season finale. Seeing him come to terms with his own culpability in the creation of his weapons, helped move him into a more complete character, not just a womanizing industrialist that he has come across as.

Seeing him manipulated into thinking he is saving Captain America was hard to watch, but it made the idea that he cared deeply for Steve Rogers more believable to me. (I wasn’t buying it in earlier episodes.) Peggy’s heartfelt appeal to Stark to break him out of the hypnosis may have made it a little dusty up in the house.

The Peggy Carter – Russian woman fight was everything I hoped it would be. (And not in a weirdo sexist way.) Peggy’s use of the scarf in the fight was pretty genius. I am adding one to my wardrobe. And of course she somehow got away! (I’m still pulling for Winter Soldier appearance in season 2.)

We knew that Agent Sousa was going to be an important part of the story from day one. I was glad he didn’t catch a bullet when he inhaled the Midnight Oil. And the earplugs…genius. I really have liked his story arc.

It was a nice touch at the end to see Jarvis give to Agent Carter the vial of Steve Rogers’ blood.

What did you think about the episode?
Jason 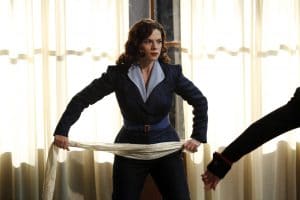 I’m going to miss Agent Carter each week. I kinda maybe sorta need a hug right now (although the grief is lessened somewhat because Agents of SHIELD returns soon).

Specific to this week’s episode, I nearly pumped my fist into the air in triumph when things started with a radio show, as I also thought we were going to see some ham slapping. Alas, no hams were harmed this episode. But I did enjoy the Midnight Oil storyline, even though it did make me think the beds were burning (those under 35 won’t get that joke, which is too bad).

One disappointment for me was that the primary storyline shifted to focus strongly on Howard Stark, and from the beginning, he hasn’t been a favorite character of mine. But, in fairness, the series firmly landed with Peggy as the rightful hero, so no harm, no foul. All this in an episode that felt strangely like an epilogue to Captain America: The First Avenger.

To see Peggy get the approval of her co-workers at the end, only to see that she never needed their approval – she’s confident in herself – was excellent. Peggy Carter was an excellent character on an excellent TV show, so a big high five to the worker’s room on this one. Marvel did it again in bringing their characters from the page to the screen.

Two final thoughts from me:

That’s all I got. This is the last time we’ll get to discuss Agent Carter, so hit me back with every thought you’ve got!
Clave 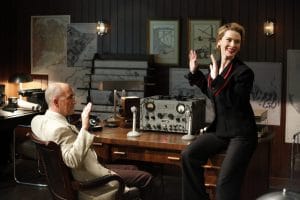 Let’s talk for a minute about the main breakout star: Jarvis. I came into the show completely unaware he would even be in the series and look at his work in just this episode:

And I really, really like the scene at the end with the agents and seeing Agent Carter get her due and then watching her teach Sousa how to handle doing great things but not getting the credit. Just when I thought we were at the brink of her getting what she is due, they pull it back to the place that sets up future seasons and dynamics. The old comic book trope: the more things change, the more they stay the same.

And that last scene: ZOLA! He certainly would be a great season two Big Bad! I really hope the show is renewed, even for a short run like this one.