The latest Marvel movie has just finished its first weekend in theaters, winning the box office this weekend with a reported $58 million dollars. After having seen it on opening night, I have 10 thoughts on the movie.

1. Marvel is (correctly) not being hamstrung by the existing continuity. Ant-man is the first film that varies wildly, with Hank Pym being turned into an older hero, Scott Lang taking on the title and Pym’s daughter being around. They completely took names, ideas and used them to tell a story that fits their movie world even if it wrecks the comics world.

2. This movie is funny, maybe even past any of the other Marvel movies in terms of its comic chops, which makes sense given that Edgar Wright wrote the screenplay and Paul Rudd and Adam McKay punched it up. 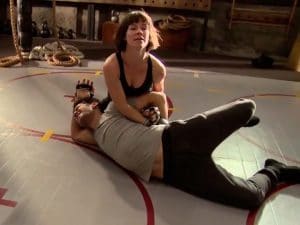 3. For the love, Marvel, it is time for a woman to be a superhero. I love Black Widow as much as anyone but Marvel has what now seems like a terrible aversion to giving a woman a costume and a chance to be great. (More on this in the note regarding the first post-credit scene.)

4. At its essence, this is a really great heist movie. The bad guy is so over the top, the real intrigue is can they pull off the heist. And like any good heist movie…

5. The crew. In general, the crew is all used to comic effect but Michael Peña steals the show. Every joke, every line in this screenplay works towards him being hilarious, from the note about how he is the only one to ever knock out the guy in prison, to his funny anecdote retellings and his whistling “It’s a Small World” in the midst of the heist. I hope there is a great add-on the DVDs starring his character.

6. Paul Rudd works. I mean, he is one of those guys that you cast him knowing what you are getting. But so was Robert Downey Jr. and when you stick the landing on who you cast, the rest can work.

7. The Ant-Man effects were decent. It is basically “Honey, I Shrunk the Superhero” with some added powers thrown in. But I enjoyed it. Shrunken Rudd seemed to work and the fight scenes were smartly done. 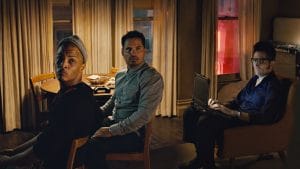 8. They tied it to the Marvel Universe in smart ways. Finally we get a “Why don’t we just call the Avengers?” joke and (MAJOR SPOILER) an epic fight between Ant-Man and Falcon that was excellent, with each showing his powers and abilities.

9. This is our second hero with a family, since the addition to the Age of Ultron and Hawkeye’s family. It adds an important dynamic to the stories, especially in it being the driving force to why Scott Lang becomes a superhero.

10. The cut scenes. SPOILERS: The first one better set up The Wasp and Ant-man sequel. And if it doesn’t, I hope there are massive protests. Evangeline Lilly is basically given the suit that was to be her mom’s and her dad is passing on the blessing to be a hero (The Wasp).

And the second one made me giddy. Basically, Falcon and Captain America are talking about whether or not they can call Stark to help, before deciding that Falcon knows “a guy”, assuming Pym and/or Lang. And their problem? The Winter Soldier’s arm is stuck in a machine or they are trying to remove it for some other reason. 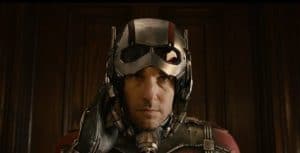 Overall, this movie did what Guardians did a year ago: it proved that Marvel has a plan to take lesser known characters and still tell great action stories laced with humor that audiences will eat up.

Sure, this isn’t the Ant-Man of the Marvel comics world but the bending of the story to make a movie works in a way that is unexpectedly good. Do I wish I had seen the Edgar Wright version of the movie? Of course. His departure from this film after working on it for years is really the only major studio misstep we have seen from the Marvel suits so far. They managed to make it work and put out a pretty good superhero popcorn movie.

Thanks for reading. If you’ve enjoyed Nerds on Earth, please up us spread the word by using the social media buttons just below.

Ant-Man and the Wasp: Twice the Tiny Fun or Too Much at…