About a month ago, Clave gave the D&D actual play podcast called Crit Juice a listen and it didn’t really click with him, so in accordance with our policy regarding promotional materials, he kicked it to me.  Crit Juice just wasn’t Clave’s jam, but it absolutely is mine!

I’ve only listened to about a third of the episodes at this point, but I am in.  I’ve hyped it on Reddit, I listen to an episode or four every day (a benefit of my late coming that I shudder to know I’ll lose when I catch up), and I have encouraged all of my D&D enthusiast friends to check it out.  Here’s why:

In the spirit of fairness, I have to confess that Crit Juice is the only actual play podcast I’ve listened to so far, so perhaps I’m just uneducated on what is actually out there.  But here’s the thing: I know what I like, and I like this.  Could I like other actual play podcasts equally as well or more?  Sure.  But I don’t perceive myself ditching Crit Juice in either case because…

The DM is phenomenal.  On top of – and more important than – just knowing the game’s mechanics inside and out (and therefore ensuring a smooth flow to gameplay), David Crennen is a great story teller.  He invests himself into the world, the NPCs, the narrative, and the campaigners in such a way that the podcasts feels like a page-turning novel.  With a weaker DM, this podcast might languish; relying more heavily upon the alcohol-induced hilarity to carry it.  Crennen is a huge part of why I love this podcast so much, and he deserves much credit.

The PCs are hilarious.  All have pedigrees in comedy and nerddom and it shows.  They’ve made references as disparate as Kimmy Gibbler from Full House to Slimer from the Ghostbuster series, and they’re always cracking each other up with both their in-game and around-the-table interactions.  That, of course, is due in part to the presence of alcohol.

Drinking isn’t just encouraged, its mandated.  So far, I’ve only played Dungeons and Dragons once, but when I did beer was present.  It usually is if I’m tabletopping it up with my friends, so it is a gameplay mechanic I am familiar with and appreciate.  In Crit Juice, there are four mandatory drinking rules.  Everyone drinks:

2) Anytime an achievement is unlocked. (More on this below)

These Golden Rules are supplemented by 1d6 rule(s) submitted by listeners.  My favorite so far: Anytime a player said the word “princess” they had to drink.  Hardly any of them could remember her name (Camellia), so many drinks were had and merriness abounded.

If you haven’t guessed already, Crit Juice is NSFW and parents should take note.

Additional Gameplay Mechanics.  Upon a Crit or Crit Fail, players (in addition to their drink) draw from a deck of cards comprised of fan-submitted buffs/rewards (for Crits) or debuffs/punishments (for Fails).  Not only is this mechanic awesome, but the cards themselves tend to be pretty entertaining and creative.  The PCs aren’t just punished or rewarded…there’s a narrative to each fateful roll of the die.

In-game achievements are also unlocked organically during gameplay that reward the player with a (typically) one time use buff.  The achievements exist for both the good (like “Speed Limit” for critting on Initiative) and the bad (like “Eleven” for rolling two 1’s in a row).

Just a quick perusal of their website doesn’t seem to show that the fan-submitted Crit Deck additions or the (I’m assuming) DM-generated achievements are available for downloading for use in your own adventures, but that would be a very sweet share. 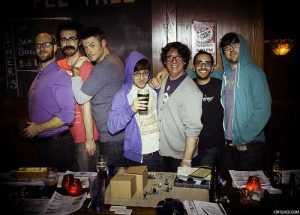 As a D&D noob, my biggest takeaway from listening to the guys navigate their adventure is how to play the game better myself.  They roll for Perception on things I would never have paid mind to and they use Athletics/Acrobatics to make the environments their playgrounds.  They don’t play this game “in a box;” they are constantly thinking creatively outside of said box and my own gameplay will benefit from playing fly-on-the-wall to their hijinks.

Well…most of it.  I’m not sure I will ever engage in a to-the-death duel with any enemy wherein the only weapon allowed is your manbits.  Hilarious?  Yes.  Will I ever be bold enough – even after a couple drinks – to talk my DM into such a thing?  Unlikely!

Give Crit Juice a listen! (NSFW) If you are new to the game as I am, you stand to have the game’s potential expanded well beyond the encounters and interactions lead by your DM.  If you’ve been playing for years, then submit some drinking rules or Crit Deck cards of your own here and listen out for their inclusion during play.  If yours makes an appearance, I believe you get a little thank you from the fellas in the mail in addition to having your name read aloud during the podcast.

And as always: Share what you enjoy. If you dig Crit Juice, spread the word!

How Your D&D 5e Background Can Help You With…