I’ve given you a quick primer of the Daredevil character, and now that I’ve seen the first 5 episodes, it’s time to share my initial thoughts for Marvel’s Daredevil on Netflix.

That is the general thought on Daredevil around the Nerds on Earth HQ.  All of us are slowly drinking it in but here are some of my first thoughts about the first 5 episodes of the new Netflix show. 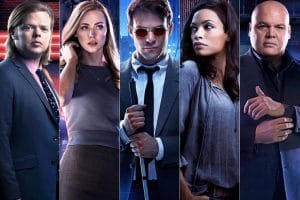 They crushed it all the way around:

The story is moving at a rapid but not too fast pace. The subplots are well tied together. The relationships are believable. The fight scenes are amazingly done; having that mask gives you some flexibility in terms of letting a real fighter just run loose.

I especially want to give a shout-out to how they do some flashback scenes but are doing them in chronological order. I recently wrote about how we don’t need more superhero origin stories and this show is handling that concern amazingly well.

We are seeing how Matt got his powers, his dad’s story as a boxer and more, but we are getting it naturally flashbacks that come in chronological order. And we are getting it in a way that mirrors the plot in the current day. They even abandon that tool in several episodes when it wouldn’t contribute to the plot.

In general, this is a well done show that is making use of its cast extremely well.  Look at the characters and interactions, and how they weave together to make a story:

All in all, I am blown away by this show and its willingness to be very, very different from all things Marvel that we have seen so far.  It opens with Daredevil taking down a human trafficking ring. And it doesn’t back away from being gritty and gory.

It honestly does bother me to see some of the violence in the show – especially against women – but I can’t say the violence in this world they are building is out of place. On some level that disturbing sense that we feel is shown in how Matt Murdock is becoming Daredevil, looking to right the wrongs.

What am I hoping for in the next 5 episodes? More of the same, I hope. Along with some Daredevil pieces we haven’t seen, especially his mentor and trainer, The Stick, who should be showing up in the flashback scenes any episode now.

If you haven’t started watching it, I can’t recommend it enough. Full 10 out of 10 nerds. What an amazing beginning to the Marvel Universe street level world.