I have the privilege of writing my own Nerd crush post to follow up Atkins’ fist post in the Nerd Crush series: Buffy Summers.  With Buffy off the table, I picked my very first Nerd crush, Deanna Troi from Star Trex, The Next Generation!

Star Trek: The Next Generation was the first TV show my parents allowed me to stay up late—8pm!—to watch.  The show aired from 1987-1994, so I watched all my episodes on reruns, long before Netflix, folks.  I didn’t really understand ALL the scientific stuff at age 10, but I understood the show nevertheless. 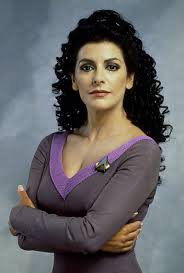 [divider]Nerd Crush on Deanna Troi[/divider]
I thoroughly enjoyed the show and the entire cast of characters.  However, one character stood out to me, and probably more after I turned eleven: Deanna Troi, played by Marina Sirtis.

I know Counselor Troi isn’t the Nerd crush of all Nerd crushes. Heck, she isn’t even tops among Star Trek fans.   Trekies are probably freaking out right now saying, “7 of 9, 7 OF 9!!!”  But I don’t care.  Deanna Troi is special to me; she was my first Nerd Crush.

Through the 90s there would be plenty of crushes: Capt. Maggir Becket (Kari Wuhrer), Lois Lane (Terri Hatcher), and the aforementioned Buffy Summer (Sarah Michelle Geller).  However, to me, none of them could ever replace Counselor Troi.

First, Star Trek certainly played to her appeal with her outfit.  She was not in a Star Fleet official uniform for a reason people!  Her look was spandex, big hair, always done up with make-up, and such a unique voice… I know I also just described Janice from FRIENDS, but whatever.  Deanna Troi pulled it all off. 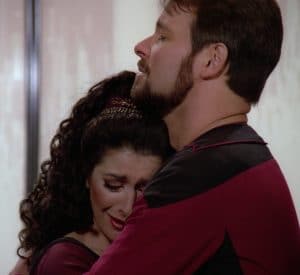 Half-human, half-Betazoid, she was always the voice of reason when Captain Jean Luc-Picard needed advice.  She tamed the wild man William T. Riker, and she can read emotions giving her heightened empathy towards others.  As Data would say, “She is an optimal mate.”

Counselor Troi was a calming presence on the Enterprise.  Worf and Riker alone would have had that ship on special ops missions through the roughest parts of the galaxy if they could have.  Thankfully, there were people like Deanna Troi to make sure Capt. Picard stayed the course and cooler heads prevailed. For a hot head like me, a beautiful calming presence is the perfect Nerd Crush.