Ah, youth…A time of so much naivety and discovery. I remember naively believing that cooties were a legitimate threat to my health and wellbeing. The age-old classic game of Girls Chase Boys was very nearly a matter of life and death. It is as close to the Hunger Games as my elementary years got.

Then I made a discovery: Cooties were a fabrication. And a quick aside if I may: Who spread this lie?! It had to have been an adult who a) didn’t want their child to date anyone until they were in their 30s and/or b) thought the dynamic cooties created among the none-the-wiser children was “cute.” Either way, it is yet another lie parents sow among children – right alongside “words will never hurt you” and Spoiler Alert Santa Claus.

With cooties done away with, girls took on a previously unrealized quality: attractiveness. I recall my first grade school crushes and girlfriends (so long as bashfully saying “hi” to them in the hall, talking to them through mutual friends, and passing notes counted as a relationship, that is): Stephanie, Angela, Megan – in that order and with last names equally recalled but redacted…but I’m writing today to talk about one of my first Nerd Crushes: Buffy Summers.

Although Buffy began airing in 1997, I did not discover her until a year later – my 6th grade year. I spent the night at my best friend Chris’s house, and he introduced me to the blonde bombshell. She had it all:

The biggest stick in the spokes of my fictitious relationship with Buffy Summers was her affinity for Angel. I mean, how could I compete with that dude? As far as I was concerned, he was the real enemy.

I had it bad for Buffy. I remember sneaking into the school library who had teen magazines on a rack just inside the door and stealthily tearing pages featuring Sarah Michelle Gellar from them and smuggling them out for display in my locker. The most famous and prized of them all: 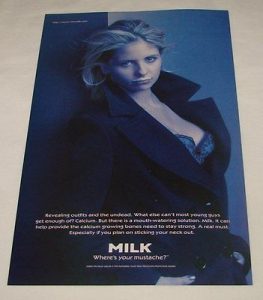 The caption reads (in part): “Revealing outfits and the undead. What else can’t most guys get enough of?”

Who did you have a mega nerd crush on?

Recap and Review of Agents of SHIELD Episode 214: Love in the Time of Hydra