When Playing D&D, Use a Paper Character Sheet, at Least Once

Then, by all means, grab those digital tools.

Why are digital RPG tools so popular? Because they’re so satisfying to use. The way they automatically adjust the math of character creation, as if by magic…it just feels so, well, satisfying. But if you haven’t used a pencil and paper at least once, how can you feel competent if *GASP!* the Internet goes out? Can the ineffable feeling of digital tools be … effed?

Imagine this: It turns out that the Mindflayers of D&D are real! They taken over Earth and they compel a few humans to converse with them in order to learn our ways. Telepahthically they ask you, “What is the most satisfying experience in your culture?”

“Why is this ‘bubble wrap’ so satisfying to pop?” the Mindflayers ask.

You think about how to explain the sensation. You imagine the feeling of a bubble bursting between your fingers like an air-filled grape, or you imagine the sound. You know it feels good, but you can’t think of the right words to explain it. 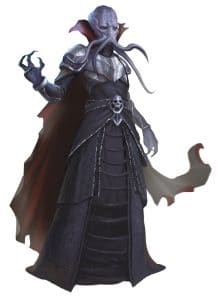 “It just is,” you tell them, shruggingly.

The Mindflayers reject this explanation and eat your brains.

That explains my predicament when trying to talk about the differences between pen & paper versus digital character creation. Really, I can’t objectively say which will be most satisfying for you, nor will I try to. This is not an analog vs digital post. Play how you want to! Really.

What I want to do is to ask you to use a piece of paper…at least once. I’ll explain why (and feel free to think I’m crazy).

Paper is a tactile reminder of your experience. Again, I use digitals tools copiously, including Hero Lab Online for Starfinder and D&D Beyond for 5e. Both are extremely satisfying experiences.

But it’s equally satisfying to have a tactile, tangible artifact of your experience in the form of a paper character sheet. Plus, paper gets all messed up, which is a big part of the appeal. For example, your Hit Points might be erased so often that your trusty Ticonderoga rubs a hole in the paper. That well-worn look of a paper sheet is a physical chronicle of happy experiences around the table.

The burden is the key. Computer games are amazing but they will never fully supplant an analog pen and paper RPG because it’s a totally different experience. Computer games relieve players of any burden of designing and adjudicating models.

On the other hand, it’s a breeze to have a digital tool take that burden away from you. Let the software remember all those modifiers and update your rolls like magic! Don’t flip through a book; lean on the math that is baked into the digital tools.

But that “burden” of designing a character–and that “burden” of adjudicating fuzzy rules–is part of how you learn your character. Indeed, research has shown that writing stuff down helps to graft it into our melons. And that work of researching rules and modifiers helps to anchor those rules into your working memory.

Building a character on paper from the ground up is a good way to gain familiarity with that character and how it plays. I encourage you to try it at least once. Then–after you’ve done that hard work yourself a few times and gained the competency–ditch the paper, ’cause you’ve earned the magic that the digital tool brings.

And give some thought to your character’s name. This might seem like a simple thing but don’t overlook it. We’ve all played a video game against an online opponent with a name like “URmomSux69.” That’s not a character in any type of narrative sense whatsoever. It’s just a juvenile collection of letters and numbers.

“Roleplaying” a character like URmomSux69 isn’t roleplaying at all, it is a mere series of game objectives to make them feel more powerful than another character. That’s as deep as the narrative goes. Indeed, many online games place heavy emphasis on PVP events, the object of which is for players to assert their superiority over others. That is a far cry from the ritual of a pen and pencil RPG that has a goal of a cooperative shared storytelling experience.

That’s not to knock PVP or video games, it’s just to illustrate that paper and pencil RPGs are designed to offer a different experience, so lean into that. The first step of that is to break out your freshly sharpened #2 and write a character name.

Don’t worry, you can erase it later.