By Clave Jones On Jul 13, 2018 Last updated May 23, 2019
Share TwitterReddItPinterestFacebookEmailPrint

Götz von Berlichingen was a surly son-of-a-gun. The 16th century German mercenary was famous for his iron hand. Yet he is likely even more famous for the phrase he coined: Mich am arsche lecken.

It only takes a few stories from Berlichingen’s life to paint a colorful picture of the infamous mercenary. For 47 years, he generally raised hell, both as an ally and even an enemy of two Holy Roman Emperors. Born into a noble family in 1480, he enlisted in the army at age 17 and fought on the side of the Holy Roman Empire until age 20, when he realized he did not take orders well. So he retired from the service and established his own mercenary army, which he promptly rented out to the Duke of Bavaria.

For the next decade, Berlichingen was a soldier for hire, selling his services in at least 15 petty feuds among Germany’s nobility. But he then went on the run after he plundered the booty of an influential businessman, which prompted Emperor Maximilian to issue an imperial ban on Berlichingen that made it perfectly legal for anyone to kill him on sight and without consequence. After two years in exile, Berlichingen paid a considerable fine of 14,000 gold coins and had his status restored. 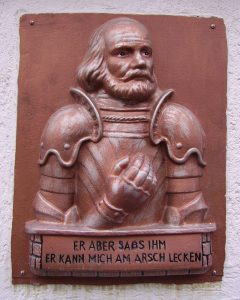 But we never mentioned his iron hand, did we? Lest you think it was just metaphorical, I can assure you that it was quit real. And it was magnificent.

Berlichingen always loved a good feud. Those that didn’t could mich am arsche lecken, and he told them as much. But all this feuding came at a personal cost. While fighting at the behest of Albert IV, the Duke of Bavaria, the 23-year-old Berlichingen was hit by an enemy cannonball that cut off his right arm, robbing him of his rapier-wielding appendage.

His first clinking, clanking right hand was a basic affair made of iron. Two hinges allowed four hook-like fingers to be brought inward to hold a sword, but not much more. Lest you think he was a monster, the iron hand had sculpted fingernails and wrinkles at the knuckles.

His second iron hand was secured with a leather strap. It was equipped with joints at each of the knuckles, which allowed for a tighter grip could hold a sword, the reins of his war horse, or even a quill. Spring-loaded mechanisms inside the hand locked the fingers into place, operating not unlike the ratchet-and-pawl system used in handcuffs.

He did eventually retire from professional rabble-rousing and put his ability to hold a quit to good use, penning his autobiography, which he left in manuscript form when he died in 1562, aged 82. Years later, the autobiography inspired Johann Wolfgang von Goethe, who wrote Götz von Berlichingen, a dramatic play based on Berlichingen’s life (that is now a movie).

The most memorable line in the play comes from Berlichingen when he was under siege at Jagsthausen Castle. Ordered to surrender, Berlichingen responds, of course, with ”Er aber, sag’s ihm, er kann Mich am arsche lecken,” or, “Tell him he can kiss my ass.”

Irrespective of Marvel’s Iron Fist, tabletop roleplaying fans can surely get inspiration from the surly Iron Hand. Paizo, the makers of the Pathfinder RPG, have already employed the iron fist of storytelling in the Giantslayer Adventure Path, penning the story of a mysterious steel-handed anti-hero.

The Glass Cannon Podcast plays through that story and the most significant NPC of the podcast for a time is an iron-fisted dwarf named Umlo. It’s incredibly entertaining and easy to trace the homage to Götz von Berlichingen as one listens.

The legend lives on.