The Marvel Secret Wars event generated a total of 137 comics over 8 months, most of which were priced at $3.99 a pop, with some priced at $4.99 each. [Doing the math…carry the aught…taptaptap…that’s around $75 a month going into Marvel coffers.] In order to read every comic of the event in floppy format would require me to refinance my house or simply commit to going homeless, burning comic book pages for heat in order to survive the 8-month-long Minnesota winter.

My point is that comic books are an expensive form of entertainment. Let’s have some more fun with math:

We’re not trying to get an MBA here, so I’ll stop there. But I think it’s helpful to at least imagine these markets with at least one eye on business. So how’s the comic business going? Well, we already know that Marvel is trying to wring every ounce of juice out of the turnip and I’m not familiar enough with DC to comment confidently, so let’s turn our attention to Image Comics, the company I give most of my comics money to.

Image always has fresh titles. At the latest Image Expo, the publisher announced an avalanche of new titles. I think the number was twenty, which feels about right considering Image loves generating new #1 issues. The masthead talent was impressive and the ideas behind the titles continued the creativeness and quality Image has become known for.

But what is Image’s market exactly? Some publishers like Boom!, Dark Horse, and IDW produce some nice comics for licensed properties. And Marvel and DC has the market cornered when it comes to superheroes. Image literally takes everything else. Ever since Walking Dead shambled forward, Image has been able to allow talented writers and artists to do the projects they want to do.

There is Saga, Sex Criminals, Chew, East of West, Paper Girls, Black Science, Southern Bastards, Invincible, Fatale, Low, and many more. What’s notable is the previously listed titles hit just about every genre you can think of. Image’s market is originality and experimentation.

Are they raking in the cash? How valuable is the parcel of land where originality and experimentation reside? Well, Image still depends on the direct market to reach customers. You buy them at comic shops and not at Target, in other words.

A well-informed staff person at a comic shop can typically give you one or two quality recommendations a month, as Michael Adkins has pointed out in his monthly new #1 series. And Image has built up enough of a brand that comic shop employees are willing to take a flier on pretty much any new #1 Image puts out. I tend to think this as an embarrassment of riches, rather than a glut of the market.

Image also represents a far greater diversity of both creators and characters. Image is slowly and surely expanding a comic marketshare beyond white men stepped in nostalgia. Add that up and one would think that Image is in a nice shape financially.

Creatures of habit. I took the frequent relaunches for Marvel comics as an opportunity to stop collecting many of the titles that I had collected for over 30 years. I realized I had become a creature of habit. Although I had deep affection for Spider-Man and the X-Men, it was driven almost entirely by nostalgia. I couldn’t track with the current storylines; I was reading out of habit.

So I gave up on going to the comic shop trying to figure out how all the crossovers tied together. Instead, I got a subscription to Marvel Unlimited and was able to read the same comics on my iPad after only a six months wait. It was the best comic decision I ever made and it certainly changed the economics of my comic reading.

Cultivated readers. Image comics took a different approach and they are the reason I still go to comic shops. They have cultivated readers by offering a diversity of creator-owned comics that are creative and original. 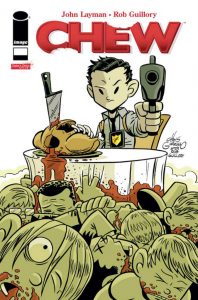 What’s better is Image sells the first trade of a title for only $9.99. I’ll drop a Hamilton on a trade comic, particularly because of the incredible amount of goodwill that Image has built up in consistently publishing interesting and engaging stories. An Image comic has earned the benefit of the doubt and I reward that with my dollars. More often than not, I’m not disappointed.

There is danger in saying yes to so many new titles if you push yourself into a zero-sum retail position that pits one Image new title against the next new Image title. But so far it seems like the market is still asking for more.

So make mine Image. They are positioned quite nicely in the industry. I can get my Marvel titles 6 months late via the Unlimited app, plus make a once-a-month visit to the comic shop to get some fresh and engaging stories. And I always feel like I’m getting a good bang for my buck.