By Michael Adkins On Mar 29, 2016 Last updated May 29, 2019
Share TwitterReddItPinterestFacebookEmailPrint

Batman v Superman has been one polarizing film.  I can’t recall the last time my Facebook feed was populated by such wildly opposed opinions for the same movie.  They ran the gamut:

However, the headlines of most respected review sites slanted unapologetically towards the negative end of the scale, and I, too, find myself there.  I don’t think it was absolute garbage, but I do think it struggled to find its identity, relied upon the thinnest of threads throughout, and just downright didn’t make sense at times.

Unfortunately the movie is click-baity with its title and we haven’t yet learned to distrust Snyder as we have Michael Bay, so its doing well in the theaters.

NOTE: SOME SPOILERS AHEAD.

Early on, the movie leaned heavily upon the idea that Superman’s heroic actions left many innocent people in the midst of tragedy.  You’re practically beaten over the head with the flip side of his heroism’s coin:  The opening scene recounts the near total destruction of Metropolis during Man of Steel‘s climactic battle, then you’re treated to a double-amputee who hates Supes for taking his legs, then a courtroom scene wherein a woman weeps as she tells of the damage done and lives lost during his most recent rescue of Lois, and a lot of news coverage driving the nail even further home. 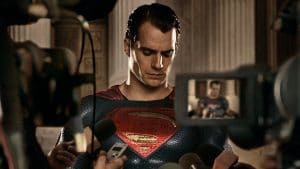 I thought this was an intriguing angle to explore!  Push Superman into a crisis of conscience; show him thinking twice about what and when he intervenes.  That would flesh out his morality and ethos in a way that we haven’t seen yet (and, by the way, would have been a much better way of outlining his “no kill” clause than him…you know…killing).

But all the screen time devoted to this angle (and its significant) amounts to is a mopey Superman.  He frowns.  He shakes his head.  He furrows his brow.  That’s it.  [SPOILER] Hell, when a courtroom he’s standing in full of innocent people explodes, all we get is more frowning.

In the end, none of this plays a significant role in the actions he takes throughout the film.  Instead, the movie plods ruthlessly towards the titular confrontation.

Good Lord, where to start?  A lot of the plot relies upon silly coincidences, forced connections, and bad characterizations and motivations.

Luthor’s dad is presumably(?) killed in the battle between Zod and Superman in MoS.  Its never explicitly stated (not much is in this movie), but supposedly that’s why he has a problem with Superman.  Oh, and its implied that he already knows who both Superman and Batman are (aka Clark Kent and Bruce Wayne) or that he figures it out off screen and with no “to do.”  There’s a scene where Luthor is excited to bring Bruce Wayne and Clark Kent together, which only makes sense if he knows their secrets; otherwise he’s introducing a scrub beat reporter to a billionaire, which is decidedly unexciting.

As for his hatred for Batman, that doesn’t seem to take root on screen until Batman steals his kryptonite.  For this, Lex wants Batman’s head.  This makes Lex little more than a child, but definitely a sociopath.  And I’ve no clue why Batman left a batarang except to give Luthor the middle finger for no apparent reason.  But by this time, he’s already dragging Wayne/Batman into the fray by placing the blame for all these deaths by Superman on his shoulders via the double amputee.  And Batman totally falls for it.  The World’s Greatest Detective doesn’t see that he’s being manipulated…?

Manipulation aside, Batman’s motivation is an exaggerated paranoia.  I think placing Wayne on the scene of Metropolis’ destruction was a slick move – leaving Wayne stewing in impotence for almost two years before kryptonite is revealed, thereby leveling the playing field.  Would he then prepare for that 1% chance of Superman turning on the world?  Absolutely.  Would he act immediately on that 1%?  Nope.

Of course the ultimate thin thread is the way the titular heroes’ moms’ names are identical and that – THAT?! – is what diffuses the fight between them?  Give me a break.

The fact of the matter is that conjuring up a believable reason for Batman and Superman to come to blows is tough work and usually relies upon devices like mind control and alternate universes.  In the absence of those angles, one or both of the heroes’ character is going to take a hit and spin off the comic rails.  Most people don’t care, I guess; they’re in it for the that, not the why – something Jason has covered previously in his Story vs. Spectacle post. 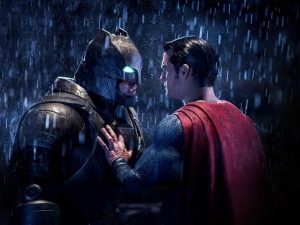 This movie nails spectacle.  The fight between Superman and Batman, despite the odd ways it came about, was genuinely fun to watch.  Batman kicks the crap out of Superman, and rightly so as the Kryptonian was unaware of kryptonite and its effects until he was breathing it in. The fight featuring Doomsday and Wonder Woman in addition to Batman and Superman was well done, too.  Batman mercifully stayed out of it for the most part – as he should – and Wonder Woman shines.

But that doesn’t change the fact that thin threads hold the spectacle together.  The Batman/Superman fight was totally avoidable, but apparently Superman can’t fight and talk at the same time.  Doomsday’s origin is downright nonsensical, and its culmination sets a terrible precedent for the DC cinematic universe that they’re trying to build.  A plot point necessary to make the Justice League movie hinted at in the end is all but undone in the movie’s last shot and robs the movie of any gravitas. 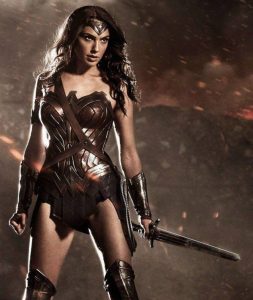 I actually like Affleck as Batman.  While I still hold that they exaggerate his character a good deal – not to mention that Snyder has him kill (If you haven’t read his explanation for that, its here in which he basically says that he turned Batman into Jigsaw from the Saw movies.  He doesn’t “kill directly,” but come on, Snyder…) – he does well with what he’s working with.  Cavill still doesn’t impress me as Superman.  He looks the part, but doesn’t do much with it in my opinion.  Not much was demanded of him in this movie.  And I genuinely can’t wait to see what they do with Wonder Woman.

Best performance – and, I’d argue, character – in the movie goes to Jeremy Irons’ Alfred.  Worst:  Eisenberg’s Luthor.  He just felt like a vindictive child who responded to slights with sociopathic ploys.  He should be more if he’s going to stick around.

C-.  If you care about plot, you’ll spend the majority of the movie wondering where it is – and you’ll be bombarded with distracting and pointless dream sequences that will only further confuse things.  (Seriously, if I had another 1000 words I would unload on the dream ridiculousness).  If you’re in it for the fight, you’ll have to wait a long time for it to come, so the first 1.5 hours+ of the movie (thats the length of a standard feature film!) will be boring as all get out.

Hopefully the resoundingly negative reviews work for us in future features.  My advice to Snyder:  Quit defending what’s done and get to work using viewers’ responses to make your next product better.  Quit defining fans as “people who like my movie” and critics “as people who don’t.”  There’s a lot of overlap there, sir, and you would do well to recognize that and use it to your advantage!

PS: I’ve also read a lot of hate surrounding Superman’s portrayal as a messiah and all his ties to Jesus in the movie.  Guys, you’ve got to get over that.  That’s been the case for a long time now.  Go watch Superman Returns.  It’s way more pronounced in that movie.  Don’t hear me saying its excusable, but do understand that it was to be just as expected as the end to the Doomsday fight.