So, obviously spoilers for this week’s The Walking Dead. Let’s just jump in.

Some major things happen, most notably, Daryl gets shot at the end of the episode. (I am on record having warned the entire cable industry- if Daryl Dixon dies, I am canceling cable. Not just the AMC channel. All of cable. I will record the call and become a YouTube sensation as I bear open my pain with the AT&T operator.) That said, Glenn’s dumpster vacation has taught us this important rule: there are untouchable characters in the Walking Dead. (And, to me, that h 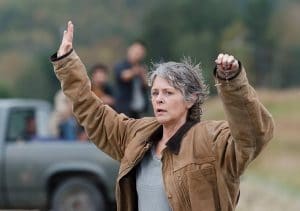 as damaged the show dramatically.)

We knew from the end of last episode that Carol was running away. (Note: if you haven’t checked out Earth Nerd Adkins’ breakdown of what we think has been happening to Carol, you really should. It is a stellar piece of writing on the Walking Dead in a way that I haven’t seen before.)  And before Tobin can get word of her departure out to everyone, Daryl takes off as well, heading to track down and kill the people who killed Denise.

And, then it all falls apart. While they leave Maggie to rest up and eat pickles (Y’all FYI- she is pregnant. Silly writer cliches) and get a haircut fro Enid, a large swath of people go after them. Rick and Morgan go out to find Carol and Rosita, Glenn and Michonne go out to get Daryl. 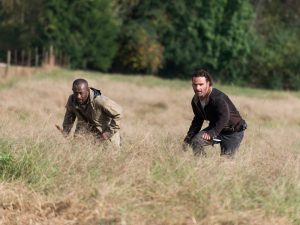 Turns out, Carol, using a large jacket hiding a submachine gun, is just fine. I mean, she still likely has PTSD, but she manages to kill most of the truckload of Negan’s folks who shot out her tire and didn’t leave her alone when she asked nicely. Twice. After that showdown, it isn’t clear what happened to her and later Morgan and Rick follow a blood trail through a horse barn, a zombie cluster and, eventually, Morgan sends Rick back, explaining that he understands what Carol is going through and will find her.

Meanwhile, Daryl gets tracked down, Glenn gives a speech, which I surprised doesn’t end with an arrow in his eye and, eventually, they all get captured. And Dwight, the face wounded guy from way earlier this season and Denise’s killed, shoots Daryl in such a way that we aren’t really sure where he was wounded.

As a piece of television, this is 7 out of 10 nerds. And it is setting up and building towards something even greater with the 90 minute finale. It was definitely slow in places but overall, it revved the engines a little headed towards the conclusion next week.

That said, unless there is a revelation that the water of Alexandria is full of something that makes people dumb, I don’t understand what is going on. 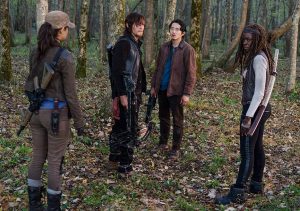 Rick and crew acknowledge that there is likely a fight coming soon from the Saviors. They are loading weapons, hiding them in preparation. And yet, as soon as someone runs off, they divide up the tactical strength of their team and go in different directions. I understand the desire to make sure Daryl was not being dumb. But Carol told you she was leaving and didn’t want to be found. (Also, how bad do you feel if you are Tobin? Carol was fine, but then she slept with him a few times and decided that she needed to leave town. Forever.) So now, Alexandria really has only one big gun: Abraham. A couple JV but capable people: Sasha, Carl. And Maggie seems to be maybe be losing the baby, so, she definitely won’t be 100%. Three episodes ago, they were convinced that the old guard of Alexandria needed to be protected and that they weren’t ready for defending the place. Now, they just up and abandoned it!

I am looking forward to this week. Negan’s reveal should be big time. Potentially, some of what was done with the Glenn/Dumpster debacle might get undone when a character we really care about dies. Potentially even more than one character.

It’s Time to Give The Walking Dead Another Look