For the last two weeks, Carol of Walking Dead fame has been the topic of a lot of heated discussions amongst us Nerds.  She has been a person of interest in the last two episodes (613 and 614) wherein she seems to have suffered a mental break of sorts. She’s cowered, she’s plead, she’s “gone soft,” so to speak – losing the edge she’s had since being booted from the prison for torching Karen – and death stung her anew when Rick pulled the trigger on the savior that dropped the “We are all Negan” line.

Even during my live tweet, I went back and forth on whether or not Carol was feigning weakness. 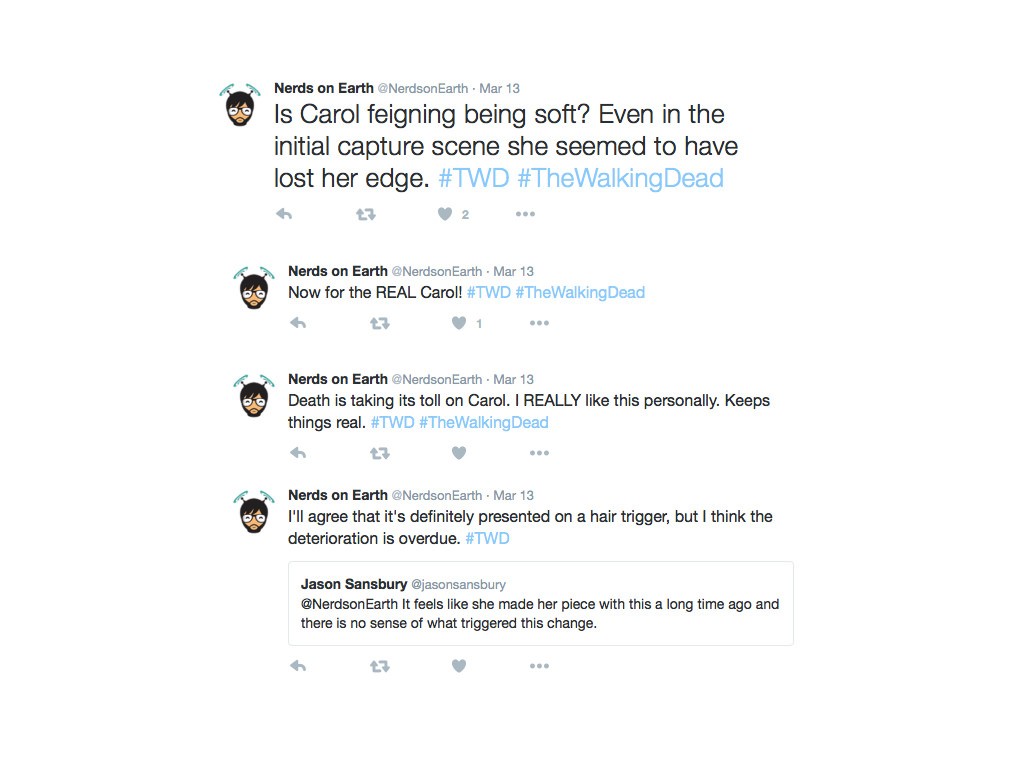 From the get-go, I’ve been of the opinion that a break like this in someone is overdue.  I’ve done a lot of research on combat and violence’s impact on man’s psychology and physiology – reading the works of top names in the field like Lt. Colonel Dave Grossman, Gavin de Becker, and Michael J. Asken, to name a few. I was somewhat blinded by the curse of knowledge.

Given what I’d read, I was able to fill in the gaps that may have gone unfulfilled in the narrative concerning Carol’s shift. But a number of questions remained: Is it real? Was it reasonably and clearly explained? What served as the trigger? Why now?

After days of conversations featuring all of our writers and Earth Nerd At Large Will Sansbury, we’ve alighted upon an explanation for Carol’s break that we think makes sense both in light of and because of recent events – even a couple that seemed odd at the time.

The first piece of the puzzle is a place: Alexandria. After the dust settles within its walls, some semblance of life resumes. We have in Alexandria unprecedented levels of mundanity for our battle-hardened survivors.  They settle in to homes, settle down with others, and even have leisure time.

Alexandria brings peace, peace creates distance (from the previous mode of survival), and distance breeds opportunity for reflection. And reflect Carol does. In episode 612, we learn that Carol has sat down and tallied the number of people she’s killed:  18.

During the seasons when those kills were amassed, she perceived them as necessary to her continued survival. But Alexandria seems to negate that necessity; at least for her. She’s gone domestic. Sure, she continues to carry a gun, but she substitutes patrols for baking. She seems to have given up the thought of surviving day by day and is instead nesting.

Up to this point, she could justify killing with surviving – staying alive herself.  But the threat of “non-survival”, let’s call it, is diminished within Alexandria’s walls. Ergo she may perceive a diminished necessity for and justification of killing non-walkers.

Now before you start pointing out that she has indeed killed non-walkers while in Alexandria, let me make a second, complimentary argument.

With these three categories in mind – sheep, wolf, sheepdog – we can get into some really interesting analyses!

First of all: the sheep category represents the overwhelming majority of people in the world. So in the TWD world, why does there appear to be so many sheepdogs/wolves? One could make the argument that the walkers took care of the sheep, and I think that is a fine assumption to make. But is a sheepdog a wolf if there are no sheep he or she is protecting? I believe this is the question that is haunting Carol. 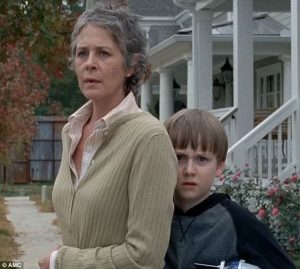 I think the line between sheepdog and wolf has been majorly blurred when it comes to Rick and the gang – particularly during this season – and that is affecting Carol in some major ways.

When we first meet Carol, she is the sheepiest sheep ever, but she eventually comes into her own as a sheepdog – a caregiver and protector – in the prison with Lizzy and Mika. After the girls are gone, Carol takes Judith underwing and upon arrival at Alexandria Sam serves as her sheep until his demise.

The point is: she’s always had a sheep which makes it easy for her to identify as a sheepdog and not a wolf. She’s had someone in her charge, her care, her protection – all of which can be used to internally justify any means of violence to achieve those ends.

Since Sam’s death, she’s sheep-less for the first time since becoming a sheepdog and it scares her.  It eliminates the justifications for violence that she’s hidden behind for several seasons. So what does she do when she and Maggie are captured? She makes a sheep of Maggie.

That explains the odd outburst that was her announcing that Maggie was pregnant, and it gives her the fuel that she needs to revert to the “harder” Carol long enough to mount their rescue from within. But as soon as the others arrive, she is without sheep once again and the softness rises back to the surface. Without a sheep, she fears she’s a wolf and I think she fears that she’s also in the company of wolves.  See: Her reaction to Rick putting a bullet in “Negan’s” head.

Compare this to the midseason confrontation between Carol and Morgan. At that time, Carol was ready to do to the wolf the exact same thing for the exact same reason that Rick did to “Negan.” The difference between her advocacy and aversion:  The presence and absence of her very own sheep.

“So,” you ask, “this could all
a) have been avoided if Sam had lived or
b) be solved if we just give Carol another dependent?”

Well, no, I don’t think either is realistically true. I believe these cracks in some character are long overdue. Violence affects us in major ways. That is part of the reason why police officers, our first responders that are exposed to more frequent and higher levels of violence and what could be considered combat stress than the rest of us, are required to take administrative leave until cleared by an investigation and a counselor if they pull the trigger on duty.

All of this is just theory, but its plausible theory. Until the show clarifies and specifies otherwise, this seems to me a reasonable explanation for Carol’s change of demeanor. What do you think? Tell us in the comments!