Who wins the comic book fight between Green Lantern and Batman?

Who wins it? Batman vs. Green Lantern

Metropolis at night has been called “the eighth wonder of the world.” The lights of the buildings gleam like stars, new constellations in the urban skyscape.

Gotham at night is something different altogether.

The sky over Noonan’s Pub is choked with soot and greasy smoke. Tommy Monaghan and Natt the Hat stumble drunkenly out the door, supporting each other as they lurch down the street. Neither man looks up. Even if they did, they wouldn’t be able to see the dark figure crouching in the shadows.

“Anything, Penny One?” Batman asks.

“I’m afraid not, sir,” Alfred responds. Miles away, a cup of steaming tea beside him, Alfred watches the monitors in the Batcave for any sign of high-speed movement. A blip appears on screen, moving rapidly. “Wait–the proximity sensors. Feeding you the position now.”

“Acknowledged,” Batman says, and the incoming target appears on his cowl’s sensors. On the horizon, growing larger by the moment, is a green light. 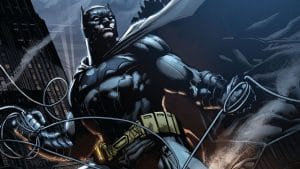 They’ll deny it if you ask, but everybody in the League underestimates Batman. Clark, Diana, J’onn, even Barry–they can just DO things. They look at him, and they just see a man with some fancy toys. They know, intellectually, how dangerous he is, but they don’t really GET it. But I’m just a man, too. I know EXACTLY how dangerous he is. But you know what, Bruce?

My toys are cooler than yours.

The ring chirps–it’s detected an anomaly, a crouching figure where none should be. No thermal signature, barely audible heartbeat–New suit, huh?—but there’s a faint outgoing radio signal.

Green Lanterns are expected to operate in some of the most inhospitable conditions in the galaxy, Batman reflects as he keys in a sequence of commands to his gauntlet computer. Their rings create a micro-environment that shields the user from all environmental extremes, from the pressure at the bottom of an ocean to the vacuum of space. So gas won’t work. Neither will sonics–the tricks I used on Barry are off the table.

The Green Lantern Corps were created to fight some of the biggest threats in the universe. You can’t beat a Lantern in a straight fight. Not without bringing them to your level first. Batman enters the final command. A half-mile away in the skies over Gotham, the green light begins to flicker.

Agh…what? Green Lantern clutches his forehead. He feels dizzy, confused. His thoughts are fragmented, disjointed. It’s impossible to focus. His flight pattern grows unsteady. He is weaving in the sky, barely staying aloft. Far away, Batman allows himself a grim smile.

“Is it working, sir?” Alfred asks.

Neural chaff. WayneTech developed it as a crowd-control measure. Makes it hard to concentrate. Difficult to focus. For most people, it would be an annoyance. For Hal, it’s crippling. He once told me using the ring was like giving up cigarettes. Right now, he wouldn’t have enough willpower to pass up an extra slice of pie.

Okay, focus. Got to–think. Focus. Can’t think–he did something. One of his tricks.

“In…in brightest day…in blackest night…” Green Lantern grits his teeth. Sweat breaks out across his forehead. “No evil will escape…my sight!” His voice grows more confident. “Let those who worship evil’s might, beware my power!” THe familiar words of the oath provide an anchor for his fractured consciousness, focusing his willpower. His aura steadies. His eyes narrow. “Green Lantern’s light!” he shouts, and for a moment, there is a new star, a green star, in the sky.

Batman is rarely taken by surprise. But as he watches Green Lantern refocus his strength through sheer force of will, he realizes that he may have underestimated Hal Jordan.

Hard to fight through this, he thinks, speeding towards Batman. It’s still hard to concentrate. I doubt I’ll be able to maintain a construct for more than a few seconds at a time. But I’ve got enough juice to knock Bruce down a peg or two. He extends his hand, and thinks green thoughts.

In the instant before Batman is slammed by a blast of green light, he notices that Green Lantern’s protective aura flickers while he makes his attack. The neural chaff didn’t take him out of the fight entirely, but it has rendered it difficult to multitask. He flies backward, trying to regain his feet, but before he can react, he is rocked by a bone-jarring blow to the ribs. He rolls with it, ducking the next strike, and realizes that Green Lantern is holding, of all things, a glowing green baseball bat. 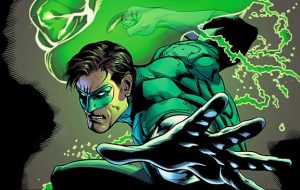 “Looks like I’m the Bat-man now!” he yells, swinging again. Batman feints, then counterattacks with a kick that comes from the back alleys of Jakarta. The punch that follows it is decidedly more home-grown.

Green Lantern is driven back. He brings up an emerald shield, warding off Batman as best he can, but his sparring lessons with Kilowog haven’t prepared him to go toe-to-toe with one of the best martial artists in the world.

I’m in trouble, he thinks. Summoning a pair of boxing gloves, he jabs, but Batman easily slips the punch. This is Batman. He can do anything!

Jordan smiles as he barely dodges an elbow strike. Well, he can’t fly…

Before Batman can throw his next punch, he finds himself hurled into the air, a green springboard dissolving where he had been standing an instant ago. Creating space. He’ll put everything he has in this one. If he hits, it’ll put me down, Batman thinks in the space of a moment. In the space of a second, he knows he has one chance.

As Batman tumbles through the air, Green Lantern sees him pluck something from his utility belt. As he points his fist forward, summoning all his concentration on a final blast, a blinding light rips across his eyes. Dazzled, his shot goes wide.

His cape flared, Batman glides boot-first into Green Lantern, slamming him to the ground. He tucks his laser torch back into his belt. Won’t cut much at that range, but it’s plenty bright. And without the ring’s protection, bright is enough. On the roof of Noonan’s, Green Lantern groans. Looking down at him, Batman chuckles–a rare sound. 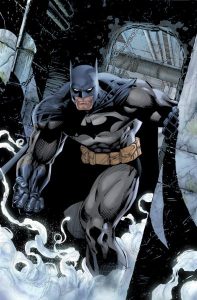 This was a close vote early, but Batman was never really in doubt and ultimately ran away with the popular vote. We tried to keep the fight close but we’re sure this result will prove controversial, but Bruce moves on to the finals while Hal is left to pick up his many pieces.