Dynamite Comics has a knack for making comics based on niche licensed characters like Red Sonja, Army of Darkness, Warlord of Mars, A Game of Thrones, and Battlestar Galactica. They’ve done it again with Pathfinder, the role playing game that began as an offshoot of Dungeons and Dragons, but quickly began to create some of the best characters in tabletop RPGs.

To be clear, Dynamite Comics isn’t known for their subtlety as an art form. No one is getting a PhD in Art Theory or English Lit. from reading Dynamite Comics. But they can pretty much guarantee to be entertained.

This is certainly true with their Pathfinder comics. They are colorful, violent, and occasionally gratuitous. But they are also pulpy, and they have a lot of charm to them as well. Written by Jim Zub (Suicide Squad, Samurai Jack, Thunderbolts) they have a tone that is not too unlike his Skullkickers series, in which adventurers have an epic fight, head back to the tavern to unwind in revelry, then embark on a new adventure the next day.

Let’s go through each of the major arcs of the Pathfinder comics, and share a little bit of what you can expect. 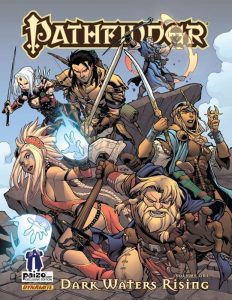 Pathfinder Volume 1: Dark Waters Rising This six issue arc has a hardcore D&D feel that starts with a goblin fight and rolls into a bar brawl. It also introduces the ‘iconics‘ which are the major characters of the Pathfinder RPG.

Like mix-matched socks, our heroes – Valeros the fighter, Ezren the Wizard, Merisel the elf rogue, Kyra the Cleric, Seoni the sorcerer, and Harsk the dwarf ranger – are pulled together into a ragtag adventuring party over the first 6 issues. Adventuring begins in the little town of Sandpoint, which is an iconic location in the Pathfinder RPG. Pathfinder fans will love it, but general sword and sorcery fans should dig it as well.

What really moves the comic to the top of the pull list are the excellent extras. Every issues comes with a fold out map, a fully stat-blocked NPC, and some adventuring hooks. It’s not often that a comic comes with a free tabletop RPG adventure, so this is some real added value. Amazon has the hardcover. 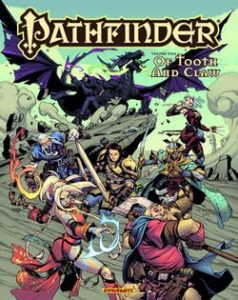 Pathfinder Volume 2: Of Tooth and Claw The second 6-issue arc brings a dragon into the mix, which is always welcome. And there is a nefarious cult! But this arc also stumbles a bit. Even if it wasn’t consistency stellar, the art of volume 1 was always functional and fun (as it fits in stylistically with the incredibly popular Wayne Reynolds, who is the chief artist for Pathfinder).

But Volume 2 features an artist change that is a drastic shift in tone, and quite frankly, I just wasn’t feeling it. Issue 10 returned to form with the illustrations of Sean Izaakse, who drew nice action and expressive faces, so the point isn’t that the art jumped off a precipice in volume 2, just that it was uneven.

In addition to the art taking a step back in volume 2, the RPG extras are scaled back slightly in the second volume as well (no included fold out maps). Budget cuts, man.

Yet Of Tooth and Claw keeps up the pulpy fun! And readers get to know the characters even better! Plus, a romance blossoms! Here is the hardcover. 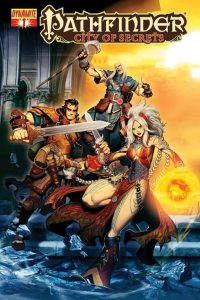 Pathfinder Volume 3: City of Secrets Pathfinder comics are bit esoteric in regards to setting, but Zub plays fantasy archetypes right on the nose: “Cleric, lend me a healing spell!” “Wizard, stand in the back and hurl your magic!”  So what Pathfinder comics lack in subtlety, they make up for in enjoyability.

This is true for the excellent 3rd arc as well. Our group moves from the hinterlands into the city and the intrigue that is found there. It is set in Magnimar, one of the major city-states of the Pathfinder RPG setting, so the lore widens with this arc. Two major storylines emerge:

It’s a wonderful arc, and while more engaging for longtime Pathfinder fans, it scratches an itch for general sword and sorcery fans. Plus, the energetic artwork is back in full force for this 3rd arc. Check it out.

There are some additional goblin tales, which are fun but not necessary within the core Pathfinder comic line. Another arc is Origins, which has each of the heroes getting a more robust individual backstory, even as all six issues are connected by an overall narrative thread. It’s as all good adventuring parties should be, and it works wonderfully, even if a couple of the origin stories are more interesting than others (I enjoyed Seoni the sorcerer in particular). Present arc is Hollow Mountain, in which the party goes into one of Pathfinder’s iconic dungeons.

Pathfinder comics are a must for Pathfinder fans. They give Pathfinder fans more of the iconic characters and settings, and make it fun as they do so. On top of that, they great campaign material in the back of the comics. The bonus in issue #8, for example, is the Dragons of the Sandpoint Hinterlands – an overview of three dragons, Black Fang, Scarhorn, and Tiruvinn, that make their lairs near the town of Sandpoint. Sign me up for comic bonus material like that!

If you are an old school tabletop RPG fan, never venturing much past D&D, then Pathfinder comics will still be up your alley. They contain the classic character archetypes placed in very recognizable settings, battling very recognizable villains and monsters. But it is all done in a fun and pulpy way. Check them out if you are a RPG fan looking for some entertaining comic reading. You can find them all out here.