After the last few weeks of high intensity action, will the Walking Dead double down with even more or back off for a smaller story? What follows is a recap and review The Walking Dead episode 614: Twice as Far.

Twice as Far centers around 2 groups that leave Alexandria. The opening shots of the episode show a rhythm and routine that seems to have settled in, as it shows the same day over and over.

The first group is Denise, who convinces Daryl and Rosita to come with her to check out a pharmacy she thinks is nearby. They balk at first, wanting to make the run themselves. but Denise is insistent that she is ready to be out in the world. 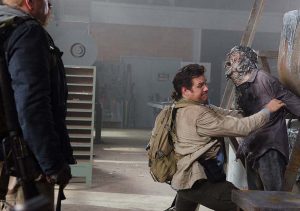 Similarly, Eugene has convinced Abraham to accompany him to metal factory. He explains to Abraham that this location is the place where Eugene will be able to manufacture bullets. Once Abraham realizes that Eugene has done well, they have a falling out. There is a lone zombie, but when he goes to kill it, its head has been encased in lead shell (A bullet zombie made in a machine shop. Get it?). After Abraham steps in to kill the walker, Eugene is livid and the scene ends with Abraham storming off.

At the pharmacy, things go fine. Except they hear a noise, which Denise goes to investigate. She discovers a zombie that has a cast, indicating a broken leg. And it appears that there is the corpse of a child whose pictures she saw on the pharmacy counter, which the parent had drowned in a sink when the world fell apart. Denise freaks out and she heads outside, carrying with her a keychain that says “Dennis.”

Later, we get back story, where Denise was raised in a family of alcoholics with a twin brother Dennis. And as they are walking back, Denise is nearly killed when she ignores Daryl and Rosita and goes after a cooler full of soda. She manages to pull it off and while they are reading her the riot act, she basically implores them both to live full lives, that they can’t let the things that have happened from having a life.

At which point, she is killed with a crossbow arrow through an eye. 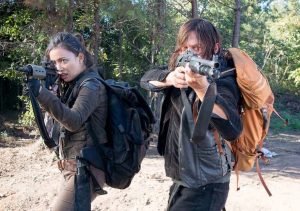 Dwight, who Daryl didn’t kill previously, is there with a group of men who Eugene captive. It is a stand off, but we see Abraham hiding. Eugene appears to rat Abraham out and when half the group heads that way, Eugene bites Dwight in the groin. All heck breaks loose, which ends with some of the people dead, some running, and them carrying Eugene back to Alexandria, slightly wounded.

Eugene and Abraham manage to have a reconciliation and the group appears to be readying for war. Abraham goes and makes his best pitch for Sasha, who lets him in her house.

The episode closes with the voice of Carol, reading a letter explaining that she can’t kill for others and their survival anymore, so she is leaving and asks Tobin (and presumably others) to not come after her.

So, this week is a 5 out of 10 nerds. This show really, really needs to rebound well in the next 2 episodes. There are parts of this show that are bordering on annoying. 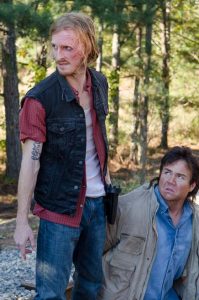 The dual plotlines for this episode in some ways is very smart. Life moves on and the world changes. In the characters of Eugene and Denise, you have novices at surviving in the zombie world outside the city. But they also have both trained and are ready to move outside and show themselves to be survivors. That is a great premise for a through line in the episode. And I feel like they completely undid it with what happened to Denise.

I loved Denise. The actress who played her, Merrit Wever, is a great actress, and I have been a fan of her work going all the way back to the Aaron Sorkin led Studio 60 on the Sunset Strip. This episode did some major work on her as a character, with her sharing her past and deepening her connection to Daryl. So, it was massively disappointing that they ripped it all away. And the precedent it sets is troubling: only the people who are warriors now can be warriors ever. It is the unintentional message and you can’t undo it by saying Eugene was proof it was different. It wasn’t really.

The continuing descent of Carol is still inexplicable. Unless next week is a Carol set piece and we get a full walkthrough of what has happened and has been happening to her emotionally over this season from Ninja Carol, Killer of Wolves, to Acorn Beet Cookie Carol, it feels like this plot that came out of nowhere will never be resolved. If she dies at the end of the season, which I suspect may happen, it is going to be a disastrous close to a character that grew so much over the course of the show and will have been a sad, slow, unexplained closing. It will be the worst ending since Lost. Or Battlestar Galactica.