Who wins the Round Two scrap between Wolverine (who bested Iron Man in Round One) and Captain America (who toppled Cyclops)?  Your votes determined the outcome, so read on to discover the final results!

You always forget about the metal in the jaw until you hit him square.

And you always forget about the metal in his hands until he hits you.

Captain America and Logan have tangled before and have seen their share of violence. The combination of Steve’s long ice bath and Logan’s healing factor meant even as far back as World War II, they have fought, mostly side by side. But not always. And today is one of those days where they find themselves on opposite sides.

When you are fighting Wolverine, you always know about the claws. Six 12 inch blades that come out of his forearms and that are sharp as anything man has ever made. Rogers wonders what Logan has to do to keep them that sharp. It is irrelevant at this point, as his main mission is to make sure he doesn’t end up with them stuck between his ribs. 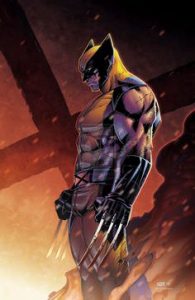 Logan has always admired Rogers’ work. They say the super soldier project made him the peak condition of any human being ever. Before mutants and others raised the bar even higher, Rogers was the bar. Not that it is all condition; Rogers has worked hard and trained himself to be a powerful weapon. When they put that shield into his hands and he got good using it, it made Rogers even more formidable. It isn’t a long list of things that Logan can’t cut through; but Captain America’s shield is definitely high on that list.

As Logan attacks, Rogers is using his shield to block the claws, trying to make Logan work harder, maybe get him out of balance. But Logan isn’t just a mutant with metal bones. He has years of training to be a fighter, a warrior, even a killer. So every blow that Rogers deflects is soon met with another.

And this isn’t a YouTube fight, over in 90 seconds. The fighting goes on and on. Blow. Parry. Dodge. Shield. Claw. Repeat.

Rogers knows that he can’t do this as long as Logan can. If it was just sheer force of will, Captain America likely prevails, even if barely. No, the truth is that Logan’s blasted healing factor means that he is always recovering. And with that in mind, Captain America has to take a risk.

He knows that Logan will pounce when given an opportunity. One small opening. So like a fencer gives the body to attack his opponent, Rogers seemingly lets his guard down. Logan is quick and on him as soon as Rogers throws the shield. And with a body made heavy with Adamantium, Logan is on top of Rogers and ready to deliver a blow when the shield hits directly at the base of his skull. 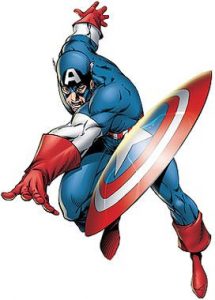 Rogers wasn’t anticipating the loud ringing noise when the shield hit. It was a perfect shot and it was his hope that Logan would be momentarily dazed. And it seems to work. He scoops the shield quickly and runs in, looking to hit Logan with the edge of it directly in his jaw. That second shot hits just as well as the first had, and now Logan looks like he has taken a few too many shots to the head. He is dazed.

And then Rogers notices it. Logan is moving past dazed. Berserker.

It is in all the files. When Logan became an Avenger, he didn’t hide any part of it from the team. He knew he was dangerous and while he had long held it under control, there may be a day when it came back. And he wanted everyone to be ready to do whatever it took to take him down. The back to back vicious head traumas must have done the unfortunate. Logan was losing control.

As each swing became more vicious, Rogers knows he has a choice to make. Logan isn’t Banner. He can’t talk him down slowly until the green monster goes away. This situation is different. And while they have managed to keep the fight mainly to themselves, there are others around, taking pictures, wishing for YouTube views. And what happens to them if Logan loses it entirely?

So, at just the right moment, Rogers lowers his shield and Logan strikes. Quickly, Logan has him pinned to the ground, his heavy skeleton holding Rogers in place. And as he goes to swing the death blow, the middle claw retracts. Rogers is pinned on either side of his neck by Adamantium claws. And he sees the look in his teammate’s eyes. Logan is back in control again, having regained control and not going fully into the berserker rage.

Logan speaks quietly. “I can’t let you up Steve. I can’t. But I know what you just did…and I am thankful.”

In what was easily the widest margin of victory in Round Two, Wolverine unseats Captain America with over 85% of the votes.  That sets the stage for the Final Round on the Marvel side of the bracket:  Wolverine vs Thor!  Find us on Facebook, give us a like, and keep an eye out for the poll.  You will determine which of these two Marvel headliners will take on the winner of DC’s Final Round (whose combatants are yet to be determined.)