The Nerds on Earth writers banter about nerdy topics in Slack. Here is one of those chats, very lightly edited for clarity.

Weekly Nerd Chat: Who Dies In The Season Premiere Of The Walking Dead?

Jason This week marks the return of the hit comic book-based AMC television show. And the question that everyone is asking is this: can this premiere make up for all the craziness surrounding the finale that didn’t really tell us the most important thing: who did Negan kill?!?

Clave Can I immediately torpedo this entire chat and just say who I want Negan to kill? OK, I’m doing that…I hope it’s Sasha. Nothing against her, I just don’t want it to be Abraham and the way they set up their relationship could have been foreshadowing for one of them.

Nash Man, let it be on record that Clave does NOT believe in women and children first…

Or I guess maybe he does in this case…?

Clave OK, I can respond to that! 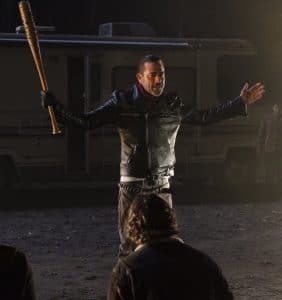 I’ve written about this before In the comics Negan has a moral code that includes harming women (which is odd because he keeps a harem, but he’s a complex dude). But it seems like the television show is keeping it open that Negan is perfectly OK with killing a woman. Ergo, it could be Sasha.

Jason I think you are spot on. TV Negan isn’t going to have the same moral code as comic Negan.

I am firmly in the camp that believes Abraham gets it. I am in agreement with you, Clave, that they seemed to be setting it up. Now they could swerve from the formula but if history holds: a little bit more of a character focus and that person(s) is going to bite it. Or be bitten.

And here is where I think the swerve is: Abraham AND Sasha get it.

Plus, if it is Abraham, we’ve already done Sad Sasha. So, why not clear the deck of them both?

Clave If Abraham goes down, they need to commit to twice as many jokes out of Eugene, cause those two are verbal wizards. I’d miss that.

Jason I agree. Jokes are the only thing that save Eugene. Honestly, his comedic engagement is all that is keeping him alive.

Clave Oh dear. Sad Sasha doesn’t feel like a road we need to travel again. Who else could it be and why do you think so?

Jason So, let’s all start with who we think it isn’t. I will go first: there is no way it is Rick, Daryl or Michonne.

They created the problem of Untouchable characters and now they have to live with that decision. 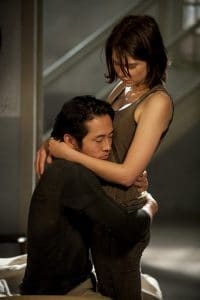 Clave I don’t think it’s Maggie. Good Lord, my heart couldn’t take that. I know TWD prides itself on crossing uncrossable lines in the comics and on TV, but violently murdering a pregnant woman is something I never want to witness with my eyeballs. I just can’t.

Nash I would probably add Glenn to my list of can’t dies, too.

Jason See, I disagree. You want a major swerve that would also get the ire of Rick as fiery as he is in the previews: Carl dies.

And, to be honest, it solves the problem of a teenager actor aging a year between seasons.

I tend to think Glenn and Maggie survive, if only because they could have left Glenn dead earlier last year.

Clave Carl and Negan have too much potential they can pull from the comics. No spoilers, but I don’t think it’s Coral.

Nash I’ll one up you. They go to the trailer and pull out Judith and she gets Lucille…

Jason But could they shift that relationship that Carl and Negan have and put it on a different character? We’ve seen them do similar things in moving storylines from comic to TV before.

Nash On a serious note, I have been 100% of the #AbrahamGotIt camp…until just 15 minutes ago when I watched the comic con trailer for the 40th time.

Nash I think that they kill off Daryl.  My explanation would have spoilers from the comic so maybe I shant go into it now? 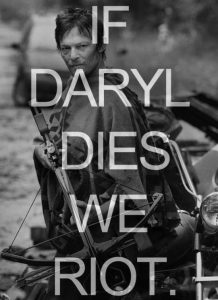 Jason If Daryl dies, we all cancel cable. The voice of the people will be heard.

I have nearly talked myself into Abraham and that makes me sad because I think they have done a great deal with his character development.

That said, I could argue for the Glen/Maggie combo. One, whichever one isn’t hit first would jump in. Two, I am not sure that we know what one would do without the other. Three, they don’t know what to do with another baby wandering around.

Uber crazy theory: Negan just kills the baby in Maggie’s womb. (I am a monster.)

Nash To answer your earlier question, Jason, about using a different character than Carl for plot purposes…I don’t think so. Again without going into too much detail from comics, I think we see Carl’s coming of age.

Clave And Maggie’s, again from the comics.

I’d list it probable for Abraham, possible for Sasha, and an outside shot for Aaron, Rosita, or Eugene.

Nash Abraham is fashionable choice, he is a character that would hit home, but not a plot crucial character. I’m gonna stick with Daryl and wait to watch the internet explode with hate over the death!

Jason So, to take a step back, we are all excited for the premiere. Did their cliffhanger ending of last season work in the end, now months removed?

Clave The cliffhanger was still horrible, but it worked in the broad sense. I mean, we’re having this chat now, aren’t we?

Nash Cliffhanger was a little to cavalier for me. I think it was a combo of arrogance and not thought through well…I don’t think they knew who they were going to kill off yet and thought they could buy some time with the cliffy.

Jason My take: when the tell-all book is written about this show, there will be evidence of contract negotiations over the course of this summer. This was all just a way to make AMC more money. Sadly.

Clave I will say this about the producers. Much props to them for maintaining a spoiler free zone for several months. I figured we’d get a confirmed leak months ago.

So basically we conclude that we have no idea. Robert Kirkman wins again!

Nash Oh and confirmed season 8, so, yeah, They win lol

Jason Unless they kill Daryl…

Clave Well, I’ll see you guys in Slack on Monday morning and we’ll debrief together.