Sometimes I get a little stuck on what to write about. Then I’ll glance at my shelves, looking for ideas. But nearly every time I talk myself out of that option because I have some deep cuts over there on my shelves.

“Who would be interested in that?”, I think to myself. But screw it, my stuff is STRAIGHT PURE JOY MAN! So I’m hitting you with it.

Here are 7 random things from my nerdy little bookshelf that you might not be aware of, but you need in your life: 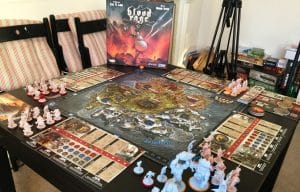 What it is. Blood Rage is a miniatures-based board game of Viking conquest. It’s a board game that is an absolute blast. It’s fast paced and relative easy to play once you have it down. We did a full review here.

Why you might like it. Blood Rage goes great with beer, pretzels, and hoots and hollers. In other words, it’s perfect for game night.

Where you can get your hands on it. Well, keep your hands off mine (that sounded dirtier than I intended it to; not gonna change it though)! I’ve started to paint some of my minis, so you’ll need to get your own copy. You can get it here for a nice price. 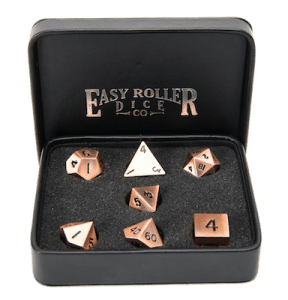 What it is. I have a cool set of metal dice from Easy Roller. It’s the Copper Polyhedral Dice set, to be specific. We’ve reviewed Easy Roller dice before, and they actually have a full line of trays, bags, and mats to add to your gaming.

Why you might like it. I love them. Even though we know it’s silly, us nerds have an emotional connection with our dice. It’s superstition, but why the heck not go ahead and get a great set of metal dice that sound great when you roll them for that important saving throw?

Where you can get your hands on them. Go here. That’s Easy Roller website and has their full product line. But you can get them via Amazon as well, if that’s more convenient for you. 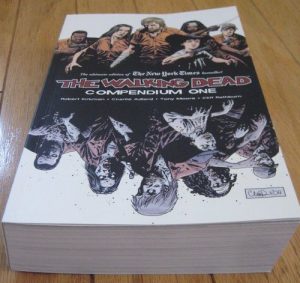 What it is. There are currently 3 honkin’ huge books that collect the Walking Dead comics. These compendiums collect around 40 issues of the comic each.

Why you might like it. With the insane popularity of the Walking Dead television show, too many people overlook the comics. They are simply excellent.

The compendiums are the best way to binge large runs of the comics for the best price. And you will want to binge it, as the comic is so engrossing, you won’t be able to wait to read what happens in the next issue.

Where you can get your hands on them. If you get them via Amazon, they are typically just over $30. For a book that collects over 40 comics, that’s a absolute steal. Here’s the link.

What it is. Marvel partners with Hasbro to release 6″ action figures of just about every Marvel comic book or MCU character you can imagine. They have a few waves per year. What’s fun it that each figure contains an additional piece of a larger figure. A wave of 8 can be collected together and the extra pieces assembled together to form a separate build-a-figure.

Why you might like it. At this point there are hundreds of the figures, making it a lot of fun to try and collect the characters you enjoy. The figures are typically well sculpted and articulated well.

Where you can get your hands on them. Target, Amazon…wherever. Some are rare or exclusive, so if you get deep into collecting them, you might have to hit up eBay or sales at cons. That’s part of the fun of being a collector though. 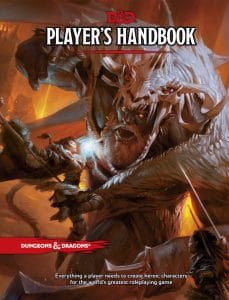 What it is. It’s Dungeons and Dragons, baby! The latest (5th edition) of D&D is excellent. The Player’s Handbook is what you need to create a character and get to playing. (Here’s a primer on the history of D&D editions.)

Why you might like it. D&D has never been more popular, as groups of nerds are gathering together to roll dice and roleplay fun characters. It’s old school analog creativity in a digital world. Besides, 5th edition is the best edition yet.

Where you can get your hands on it. Amazon has the PHB for a great price. But make a visit to your friendly local game shop is one is available to you. And if this feels intimidating to you, watch others play D&D to get the feel for it. Really.

What it is. Imperial Assault is a great miniatures-based board game from Fantasy Flight games. It’s a Star Wars themed skirmish game where you set up your troops and run through different scenarios that are created via interlocking cardboard tiles.

Why you might like it. Board games are great; Star Wars is great. What’s more, Imperial Assault is full of awesome minis.

If you want to take it 2nd level, you pull out those miniature Stormtroopers from the Imperial Assault game and you are ready to get started with hobby painting! It’s meditation for nerds. If you are interested in starting, here are some general tips, then some specific for painting the Stormtroopers.

Where you can get your hands on it. While Imperial Assault might seem expensive, you get a ton of game, plus pounds of awesome Star Wars minis. Get it here. 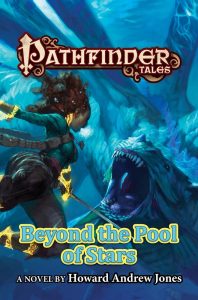 Why you might like it. The Pathfinder Tales line is consistently enjoyable. They are light reads that make them great for some entertaining and relaxing stories that feature magic, elves, monsters, and all the other fantasy trappings that are so fun.

The best thing is that Pathfinder Tales books are standalone. While they are all set in the world of the Pathfinder RPG, you don’t need to read the books in order to keep up with a convoluted continuity. Jump in and out, picking up only the books that look interesting to you.

Where you can get your hands on it. I hear Amazon sells books. Plus, Pathfinder Tales is now being published by Tor, so distribution is pretty darned wide in most brick and mortar book stores.

There you go. If you want to be a nerd in my mold, then these are a few of my favorite things. If you want to share some pictures of your collections, please jump over to our Facebook page.