After last week’s Coulson and Mack buddy cop episode, Marvel’s Agents of SHIELD episode 404: Let Me Stand Next to Your Fire gives us more interaction between the Ghost Rider and SHIELD.

A Recap of Agents of SHIELD Episode 404: Let Me Stand Next to Your Fire

Episode 404 opens with Simmons shopping for an apartment for the new Fitzsimmons abode. It turns out she was lured there by Daisy. Simmons patches up her and then Daisy reveals how someone has hijacked the SHIELD information on Inhumans, using that information to hunt them. 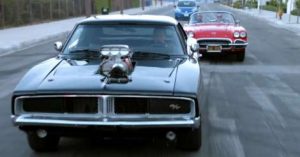 They decide to partner up and Simmons gets Daisy the access she needs. It turns out that one of the next targets is the Aussie flamethrower James, so after a humorous visit with him at his fireworks stand, they head to a storage facility to get some explosives. Simmons is perplexed at Daisy’s embrace of lethal means to combat the Watchdogs but it falls apart quickly, as James is revealed to be working with the Watchdogs. Daisy injures herself in their escape and they get cornered.

After having to literally kill Agent May and then bring her back, Dr. Radcliffe is keeping May for observation, running more tests as he and Fitz seek a cure for the ghostly possession that doesn’t involve death first.

In the midst of her stay, Radcliffe reveals AIDA, arguing to Fitz that if they can get her past May, then she may be ready to unleash on the world. After a near exposure due to a question about where she is from, they seemingly have May fooled. AIDA herself seems to have some issues and asks a lot of questions. But it seems to be setting up an AIDA-Fitz love struggle.

After a sweet car chase that began when Robbie and Coulson and Mack all showed up at the prison to talk to Uncle Eli at the same time, Coulson and Mack decide to try and work with Robbie, as his Uncle Eli won’t talk to them. They discover that Uncle Eli worked with Dr. Lucy Bower, her husband Joseph along with others on a Quantum Particle Generator. When it blew up, it seemingly killed most of their team and Eli punished Joseph, beating him into a coma. Eli knows that she will go after some kind of magical book, evidently the Darkhold that is a deep cut from the comics. We then see a scene where she uses her power to awaken the comatose Joseph and ask him where the book is. 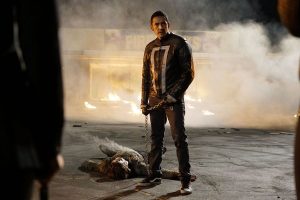 Meanwhile, Robbie, Coulson and Mack have made their way to the storage unit, as Robbie shows up at the right moment to save Daisy and Simmons. It leads to the inevitable, as Mack so graciously put it: “Did two fire dudes just drop into a warehouse full of fireworks?” And a quick explosion then leads to a fireworks display that almosts seems to say “We got the band back together” when Robbie comes out, dragging the injured but not dead James.

Back aboard the mobile headquarters, Daisy and Coulson have a moment before Coulson brings them up to speed about finding the Darkhold, with an amazingly cavalier dropping of an iPad on the floor of the mobile base. (Seriously. Just because you got government funding again doesn’t mean you need to be so laissez faire about your gear!) He then tells them about Joseph Bower waking up.

Coulson then picks up May at Radcliffe’s for the next stage, where Simmons immediately sees that AIDA is an android. And then FitzSimmons get nervous about her upcoming lie detector test.

A Review of Agents of SHIELD Episode 404: Let Me Stand Next to Your Fire

If this season were to have an overall theme, 4 episodes in, I would say it is “Let’s keep the story moving.” From the start, they have been consistently moving the story forward in each plot point. This is the first episode where I have wondered if it is happening too fast. I appreciate the speed and I wonder if it is in part, trying to hit the Darkhold big moment around the upcoming Doctor Strange movie. The tie-in with the magic angle just seems too spot on to be a coincidence. I just don’t want to see the momentum end once they hit that tie-in.

Robbie learning a new way forward? He is a solid addition to the cast and could be an interesting, yet different agent eventually.

AIDA. Yeah, so, my Whedon Spidey Sense is tingling. And I didn’t like the fact that they so easily tied together her rules of no killing and no lying with a moment that seemed to make her think that Fitz loved her. Having the android kill Simmons would be the most Whedon ending of anything we have seen in awhile.

Please let this be the end of emo, injured Daisy. Wrap her arms up in cool looking metal and let’s move forward already.