A Recap and Review of Agents of SHIELD Episode 403: Uprising

After taking a week off for the presidential debate (Coulson 2016, anyone?), Marvel’s Agents of SHIELD came roaring back to life with its third episode of the season: Agents of SHIELD episode 403: Uprising.

A Recap of Agents of SHIELD Episode 403: Uprising

This episode was a master class in storytelling, as the writers took one plot device and used it to advance several of the plotlines in significant ways. There is a group of alleged Inhuman terrorists that have some kind of electro magnetic pulse weapon, which they are using to create blackouts in major cities.

The first city is Miami, where Yo-Yo is at a hotel to celebrate a friend’s upcoming wedding. Once the EMP hits and the city goes dark, Yo-Yo winds up stuck in a hotel lobby with her friend, where a group of armed men come saying that they know an Inhuman is present. After a sleight of hand magician is falsely accused, Yo-Yo has to use her speed to intervene, giving her secret away, in part because her friend is horrified at Inhumans. 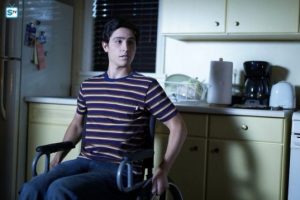 At SHIELD HQ, the new director, revealed to be Jeffrey Mace, has to settle Coulson down, as he is not happy May was sent away. Mace reveals she is in a certain facility, so Simmons goes to try and help her, as people who have been “infected” like her have a specific timeline that ends in their death. And May is approaching that timeline for her. Coulson, Mack and Fitz are all headed to Miami.

City number 2 is Los Angeles, where Daisy learns that Robbie’s imprisoned uncle Eli worked at the facility in episode 2, and that Robbie took on the pact with the devil to avenge his brother being put in a wheelchair. What’s worse is he may not be able to undo this deal.

When the EMP hits LA in the daytime, they race to say his brother, who is being terrorized by a group of thugs. In the course of the fight, Daisy has to use her powers, further damaging her arm. When Robbie leaves her and Gabe, Gabe reveals that he has figured out who she is and that she should leave, which she does. So we see Daisy, popping pills to survive her injury, all alone again.

When Coulson, Mack and Fitz get to Miami, all their gear (including Coulson’s bionic hand!) quits working and Fitz realizes it isn’t an EMP bomb as much as it is a steady pulse device. Once they rescue Yo-Yo in a spectacular lobby fight, they discover that the Watchdogs are behind the event, that they somehow had access to the registration of Inhumans information and Fitz uses science to track where the EMP device is, earning the nickname Sliderule from Coulson. They take out the EMP and explain to the other cities how to restore power. 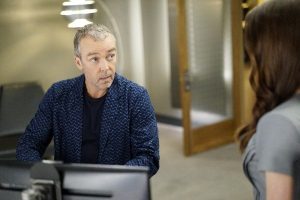 Except near New York, Simmons has taken May to Dr. Radcliffe, who powered down his android Aida before the pulse hits. Simmons and Radcliffe work through all the possible scenarios and realize that May’s brain, especially the part that is responsible for dreams, is on overdrive. The solution they come to is that they need to get May’s brain to stop by “killing” her and bringing her back.

The drugs and watching her heartbeat die part works and just as Simmons going to defibrillate May, the EMP hits! Eventually, they are able to revive her but only after Radcliffe has pulled the new fangled technology battery out of Aida to power the defibrillator to save May, who once she is revived seems fine and unaware of her time during her possessed state.

Back at HQ, Mack calls Yo-Yo to account for her helping Daisy but the episode closes with Mace making the decision to bring SHIELD out to the public earlier than originally planned with a world wide broadcast announcement.

The episode closes with Senator Nadeer on a phone call, basically revealing herself to be the leak and that the Watchdogs were able to kill 17 Inhumans in the various EMP blackouts around the world. And she speaks to her off camera brother, saying she will be back to visit when we see him: encrusted in rock, looking like he is halfway through his Inhuman transformation.

A Review of Agents of SHIELD Episode 403: Uprising

In the previous 3 seasons of this show, one of its downfalls has been dragging out plots. For instance, we got nearly 2+ years of Agent Ward/Hive. So, maybe it is the potential of being canceled or some other factor but I applaud this season: they are moving plots forward and quickly. By using the EMP attacks as a pivot point, they were able to make some serious head way on some of the stories they are telling this year. 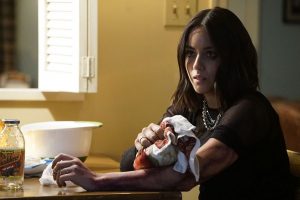 Ghost Rider and Daisy. We get some serious backstory as Robbie explains how his powers came to be, how they heal him and get Gabe chasing Daisy off, thinking she is bad news for Robbie. Plus, they set up the Uncle Eli piece that we will see pay off soon.

May’s possession. I cannot tell you how sure I was that they were going to drag that plotline out for weeks, maybe even a whole season when it was first introduced. But they have moved it along quickly and, by tying it together with Simmons this week, we seem to be moving towards a Radcliffe/Aida reveal, which will reveal Fitz’s support of that project.

SHIELD is out in the open and Coulson is learning how to offer advice to Director Mace, while also realizing he isn’t in charge anymore.

Setting up the Watchdogs and Senator Nadeer as capable foes from at least part of this season.

Again, I am appreciating the movement in the plots; sometimes they aren’t the greatest but they are at least moving and in ways that make sense and build a better story for this season. Next week looks to have Ghost Rider and SHIELD meet up and Robbie ends up in a containment cell!

Get to Know Sanford Greene, the Artist of Power Man and Iron Fist