Review of Blood Rage: A Board Game of Battling Viking Clans

When reviewing a board game like Blood Rage, it’s important to keep in mind that it is called BLOOD RAGE, so enable your Rage Lock key, don your Helm of Smiting +2, raise a flagon of mead, and practice speaking in your tractor pull announcer voice, because we’re going to talk about a game of Viking clans in a quest for glory.

Review of Blood Rage: What’s in the Box 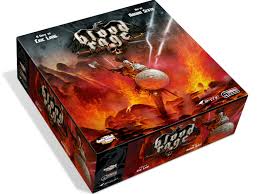 First of all, the Blood Rage box is stuffed with miniatures that represent Viking clans. 2-4 players control these Viking clans and wage a fight in the final moments before Ragnorök shatters the world and drowns it beneath the sea. A player’s goal is to pillage the 8 villages located on the game board, laying claim to the central area of the game board that contains the great tree Yggdrasil. Norse mythology, y’all.

Here are the four Viking clans:

Aside from the sexist depictions, Blood Rage’s miniatures are excellent. The sculpts are precise and detailed, the posing is excellent, and the miniatures feel sturdy. Better still, there are colored rings that snap onto the base, making a satisfying little “click” to denote who a mini belongs to. While the price of the game might produce sticker shock, when you open the box, you really do feel like you are getting a bunch of little treasures, particularly if you paint miniatures. The miniatures alone make the game worth every penny. 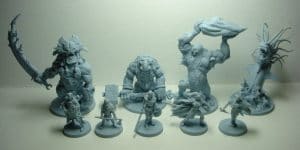 In terms of game play, Blood Rage is pretty much a simple card drafting game. Game play is divided into three ages, each of which begins with players being dealt a hand of cards. Players must simultaneously choose a card to keep, then players pass the hand clockwise to choose again until all cards are gone.

This gives players a custom-built hand of cards that you are really excited about, until you recall that you don’t know which cards your opponents kept and the whole thing feels you with doom and dread. Listen, you knew war was coming. You may have prayed to Odin to prevent your Ragnarök, but you knew it was coming.

And here is where we talk about RAGE. You pay Rage to place your miniatures on the board, pay Rage to move them around, then pay Rage to upgrade your clan with cards you drafted. At any time a player might declare they have decided to pillage a village, and a fight breaks out. The rule book doesn’t say this, but at this moment you should let out a growl, gulp down some beer, then slap the table. 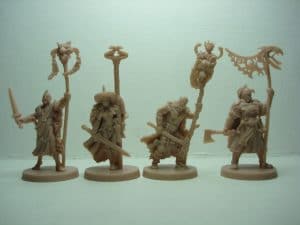 Defeated units go straight to the great Valhalla in the sky, having achieved honor through warfare. But Valhalla is very impermanent, as your minis will come spilling back out before you know it, ready to fight again. Listen, some say Kylo Ren murdered a man in Reno just to watch him die, so I don’t see the big deal that a board game packs so much fun in it’s aggression.

In Blood Rage you draft your cards with a plan, but then you may watch it all go up in smoke when you realize another player drafted with something entirely different in mind. You may even have to “rage” draft, which is to draft cards specifically so your opponent won’t get her hands on them. The whole thing might boil down to mindless battles, which would be horrible if it all wasn’t just so darned fun! Blood Rage is a game that elicits hoots and hollers.

If you typically wear Oxford tweed and thumb through literary journals in search of fresh MENSA challenges, then Blood Rage probably isn’t for you. Blood Rage is for folks who love fun. Blood Rage is a board game that is best played with beer and Dorito-stained fingers.

In terms of game play there isn’t anything terribly unique about Blood Rage. It’s a mash up of a few different board games, then overlaid with a Viking theme. But while some people will deride it’s derivative nature as a bug, I call it a feature. Blood Rage takes some great elements from other games, then dials the fun up. And then it adds Vikings on top of that.

Critics could also point out that Blood Rage isn’t particularly balanced, which is true as well. It’s possible that a player will get pummeled early or pick the wrong hand of cards, finding themselves stuck in last with no hope of a comeback. Well, that is only a problem if ganging up on other players in Blood Rage isn’t so much fun. This is a game that’s fun to play, regardless of who wins or loses.

Again, Blood Rage isn’t a thinky game, it’s a game for talking smack to friends. Blood Rage is also a game that absolutely drips with theme. This game has Viking clans fights written all over it, and it’s best enjoyed if you just give yourself over to that and go with it.

Is it perfect? No. Is is fun? You better believe it. After just a couple of Friday evenings playing Blood Rage with friends, and you’ll realize the game is worth every penny.