How Will The Walking Dead Writers Translate Negan’s Swears to Television?

It’s really impossible to overstate the voraciousness at which Negan swears in the comics. Truly, Negan swears so much in the comics that one wonders about Robert Kirkman’s immortal soul. To illustrate, here is an exact Negan quote from the comics:

And that’s a mild one. Robert Kirkland wrote that salty line, which makes you wonder if he kisses his grandmother with that mouth, as just the residue from that salty language will melt and dissolve his grandmother like digestive juices over a thousand years in the stomach of a sarlaac. If Robert Kirkland would even whisper that line to a sailor, the sailor would go mad and smash his head against the gangplank, before plunging himself into the sea. At that point the sailor would fish his own person out of the sea with an expensive deep sea submersible just so he could carefully dry out his battered skull in order to light it on fire and drown it in acid.

The point is that Negan swears a lot, so how will the Walking Dead writers translate Negan’s swears to television? 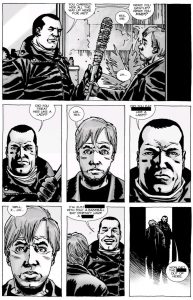 #1 The Walking Dead show runners could do something simple like bleeping Negan, which would certainly appease the censors. But you’ve probably read Gilgamesh, and you’ve maybe read Oedipus, so you know that to handle Negan’s cursing in that manner would truly be an epic fail. Besides, I’ve seen the internet orchestrate a table flip over things like inconsistency in the ways that fictional zombies behave. For the show to bleep language would elicit a table flipping campaign of the breadth that would astound the National Bridge Convention.

So that won’t do. What are some other solutions that might work to faithfully bring Negan to life without having to rescue Southern women from their fainting couches?

But the problem is that The Walking Dead is a setting that feels closer to home, much unlike the the far-flung reaches of the galaxy like Battlestar, where it’s plausible they might have different speech patterns. An invented word on The Walking Dead would come across with a think coating of BLAZZFROZZLE deep fried in ARRRROOOOOGAH! before being served with a side of PHLAN DOGGLE DOO. It would make no sense. So that won’t do.

Instead of the swears that Americans are used to, what if everything to Negan was ‘bloody this’ or ‘bloody that’. Honestly, I could stand to hear Rick be called a bloody wanker. The British have the best swear words anyway, and it’s well known that those in the Queen’s service think that Americans are mindless knaves who completely miss the subtle and idiosyncratic slights that the Brits are so good at. 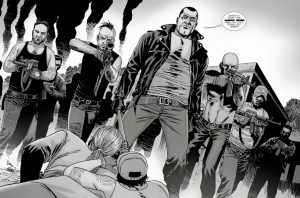 #4 But my favorite idea is to not have Negan swear at all. Negan is known to operate with a code, even if it’s a completely illogical one. While he keeps a harem that consists of his men’s wives and girlfriends, he claims to abhor rape and killed one of his men on the spot when he tried to force himself on a woman. And while Negan will commit disgustingly violent acts without hesitation, he doesn’t like children to see the effects of it, and he’s perfectly willing to negotiate.

What if during the first time meeting Negan one of his men swears. Negan could say, “I told you before, no swearing,” then immediately put a bullet in his head. Drawing a line at swearing, while simultaneously being willing to execute a man, would perfectly capture the complex and conflicting nature of Negan’s moral code.

This would be a coup for the writers. They could easily satisfy the censors as they’ve taken swearing of the board. Plus, in that moment they have illustrated what a complex character Negan is, while also showing off how dangerous he is.

How will the Walking Dead writers ultimately translate Negan’s swears to television? Gosh if I know. But they’ve kept us on the edge of our seats for 6 years now, so a little swearing won’t scare them off.

You can find Negan’s first appearance in the comics here.