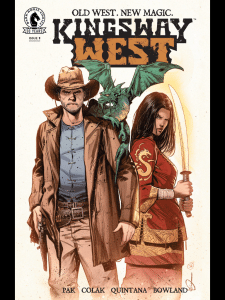 Introduction to the Comic  There’s a new resource in town: Red gold which powers “extramundial phenomena otherwise unexplainable by science,” and it is a hot commodity. Societal groups are at war with one another for possession of the substance. By the end of the first issue, you’re introduced to the United States of New Yorkers, the Chinese, the Mexicans, and the Freelanders…and never shall the factions mix.

Kingsway Law is a Freelander with a bounty on his head.  When a group of Chinese soldiers attempt to collect his bounty, he bests the four of them in a shootout but falls unconscious from a wound of his own.

He awakens in the care of Sonia, a Mexican. When asked why she’s helping him she echoes a sentiment of his from the encounter with the Chinese (which she must have witnessed): “The war’s over…So I guess I’m just trying to figure out how to live again.”

Flash forward 5 years. Kingsway is out foraging when someone else comes looking for the infamous Kingsway Law. He diverts her and her dragon pet, only to see a large group of Chinese set to her heels. At first this comforts him thinking that they’ll take her out when he couldn’t, but then he fears for his home and wife (the aforementioned Sonia) as the Chinese came from that direction.

After finding his home in ruins, he sets off after the woman and her pursuers.  Upon arrival, he finds the woman detained for harboring a fleck of red gold and attempting to use it against members of the Golden City Guard.  When the captain moves to cut off her hand, Kingsway kills him and his subordinates – revealing his true identity to the woman by merit of his skills with a gun.

She explains that the Freelanders have indeed found a vein of red gold and intend to use it to “win for once.”

Meanwhile, a group of men who identify themselves as members of The United States of New York, have a machine that can sense the discharge of red gold.  It picked up the activity involving Kingsway, the woman, and the Golden City Guard.  They charge Strode, a woman with angelic wings that are said to be a product of “Yankee science,” to find and kill those with the gold in the hopes that they will come to obtain the vein and use the red gold’s power themselves.

Why Should You Care?  The blend of magic and old west is really fun, for one thing. Revolvers share panels with a dragon in this comic. Of course this is awesome!

Kingsway has a past I want to become familiar with.  At the beginning of the comic the narration reads (re Kingsway):

The Age of Red Gold turned men into soldiers…and soldiers into monsters.  This is the story of a monster who tried to become a man again.

Pak had my attention at that, and this narration ends on page 3.  And like any great #1 (at least in my opinion), the book raises a lot of questions you want answered.  In this case:

The Accused #1 by Marc Guggenheim 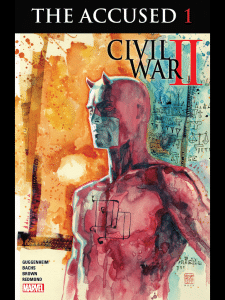 Introduction to the Comic  Hawkeye is on trial for killing Bruce Banner – supposedly at Bruce’s own request should there “if there was a chance” that Banner might transform into the Hulk once again. Hawkeye believes he saw a flash of green, took the shot, and dropped Banner at the feet of several other heroes who had gathered to confront Bruce about a disastrous rampage a precognitive Inhuman named Ulysses said was imminent (Minority Report much?).

None other than Matt Murdoch is called upon to prosecutor Hawkeye, and he’s doing a bang up job of doing so until the defense attorney suggests that Matt is being played; that the deck is stacked against Hawkeye intentionally, that an agenda is in play, and that Murdoch is being manipulated.

Murdoch does some investigating as Daredevil and overhears plans to pass “S.R.A. II” – short for Superhuman Registration Act 2.  Hawkeye’s conviction (one hero killing another) is just the cover needed to pull it off.

Murdoch does his best to “unstack the deck” against Barton in court and Daredevil lets the judge know he’s on to the conspiracy.  Eventually Hawkeye is acquitted, but the final page reads “not the end.”

Why Should You Care? You know, I received several recommendations this month and selected this one over others because I thought that Marvel court intrigue would be a fun change of pace. I was right.

Things this comic does extremely well:

Diving Back Into Deus Ex: First Impressions of Mankind Divided

The Marvel Cinematic Universe Isn’t Always Cinematic: What Marvel is Giving Us…