The Walking Dead Season 503 Review: Four Walls and a Roof

So after the end of last week’s episode of The Walking Dead, we know that this week’s episode should move forward a couple of major plot lines: what is happening to Bob?  Where did Darryl and Carol go? When is the crew headed to Washington?

The opening scene of Season 5, Episode 3 jumps us right back to Bob and Gareth, who is doing a pretty nice job of villain monologuing. It is also one of the most artistic shots of the series.  We see the walkers, desperate to get in and eat, as Gareth’s reflection stares into the window, talking about why he and the Terminus people turned to cannibalism.

Gareth then talks about the train car, the captured people would be given two choices: Join us or feed us.  He then reveals part of his speech about a bear eating its young and surviving.  He continues with some cannibalism recipes, revealing that he is more of a ladies man, carnivorially speaking.

Gareth then talks about the revenge he wants on Carol for killing his mom, on Rick for killing his brother Alex. And to top it off, to strike at Bob personally, Gareth threatens Sasha.  Bob goes from crying in sadness to laughing with laughter, because Bob indeed was bitten in the food bank run, so the Terminus people have been eating tainted meat, which is clearly a big deal to them.

Sasha is then looking outside trying to find Bob, which gives us one of the jump scares of the season, as she is looking through a night vision scope when a couple walkers pop up.  Just as she is about to get overrun, Rick and Tyrese show up and save her.

Inside the church, we learn that Daryl and Carol indeed made a break for it and the clan doesn’t know where they are.  Sasha’s anger at losing Bob shows up and she threatens Gabriel.  He quickly gives his confessions about having not opened the doors of the church to the congregation members when the walkers first came and that he is in complete agreement with the sign scrawled on the outside wall of the church: He is going to burn.  At the end of his confession and his feeling that the group was sent to him to punish him, we get the revelation that Bob has been dropped off outside the church.

After a quick battle dropping walkers and getting Bob inside the church –which now has a large painted A on the side of it – Bob gives the quick breakdown, that the Terminus people are at what he thinks is a school, that Gareth says Daryl and Carol drove away and lastly, sadly, that he was wounded at the food bank.  Rick quickly gets the location of the school from Gabriel.

As Rick prepares to go to the school, Abraham bows up and we see a conflict of leadership.  This is an interesting dilemma for the group and you see different members are torn in different ways.  Just as they are about to get into a physical confrontation, Glenn shows up to be the voice of reason and reconciliation, saying that they need each other.  Eugene, who is now being written as a post apocalyptic Rain Man, Studier of Diseases, chimes in that he doesn’t want to leave and Abraham ultimately agrees to stay the night before they are leaving at noon the next day.  Part of what makes this happen is Glenn and Maggie agreeing to go with Abraham and the DC bound crew.

In Gabriel’s office, Bob is laying on the couch and he and Sasha have a tender moment. She wants to know why he never told her he was wounded and his response of “I knew when I told you, it’d become all about the end…and I really liked the middle.” was a beautiful line.

Rick is making plans to hit Terminus, asking Tyrese if he is up for this, as Sasha pledges that she is ready for it.  In a moment of brotherly love Tyrese asks Sasha to consider a different way forward, offering forgiveness in some part and staying with Bob, so she is there when he wakes.  She then hands Tyrese her knife and says to make sure that when he has breathed his last breath to stick him in the head.

The warrior ready team heads out, leaving in the church Carl, Tyrese, Judith, Eugene and Rosita.  And in one long shot, we watch the Terminus hunting crew disappear into one set of woods and a little while later the Terminus group come towards the church.

At this point, it is like a lock-in gone bad.  As someone who has worked in churches for the last twenty years, I promise that churches are scary enough places in the dark without armed cannibals invading.  But invade they do, hunting for the crew that is left, when Judith cries and gives the group’s location away.

Which is when the silencers that Glenn found last episode show back up on the end of Rick’s gun.  There are some discussions, some disagreements and Gareth pleads to be left alive, saying he sees in Rick’s eyes that he doesn’t know what it really is like to be hungry.  It ends when Rick keeps his promise to Gareth and hacks him apart with that red machete, as Abraham, Michonne and Sasha bash people to death as well.  But in the midst of it, for the first time, we see others in the crew expressing horror by what they see.  Glenn, Maggie and Tyrese most notably. 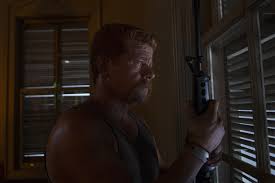 And then, there is the moment that I personally know I have been waiting for all season.  Forget getting your groove back.  Michone gets her katana back.  I have to say, it was a little dusty at my house when she picked the handle of that thing back up.

Gabriel cries that this is a house of God, to which it is noted that no, it isn’t.  It is just four walls and a roof, which is where this week’s episode draws its name.

The group then gathers to say goodbye to Bob, with Maggie leading the way with the note that he will always be a part of the group, especially poignant when you think of how many people she has lost since the farm in season 2.

Bob then wants to talk to Rick and thanks him for taking him in at the prison.  Bob shares that Rick’s act of mercy reminded him that there are good people left, and reminding Rick that he took others in as well.  Bob finally says to Rick, “Nightmares end.  But they shouldn’t end who you are.  That is just this dead man’s opinion.”

Sasha and Bob has one final moment that ends as she wants to play the game one more time: How can good come from this bad?  Bob dies before he can give her answer.  Tyrese then shows up and takes the knife and ends Bob there.  We see Bob’s grave, with a cross being made by Sasha.

Abraham, Eugene and crew, escorted with Glenn and Maggie then head to DC.  Abraham hands Rick a map, which we later see has a hand written apology and asking Rick to come to DC as well.

Then that night we see Michonne sitting with her katana outside, joined by Gabriel.  And there is a moment where she is empathetic, telling him that the memories of his past won’t stop…but that they won’t be there all the time.  When a noise happens, Gabriel moves inside as Michonne finds Darryl in the woods. And after a brief moment, he says to someone(s) behind him, “C’mon out.”

This episode is a solid 7 out of 8 nerds.

Here are some additional thoughts:

Book Review: Of Dice and Men: The Story Of Dungeons and Dragons