How to Make a Good Fantastic Four Movie

Make it a period piece. When Fox tanked the X-men franchise with the cringe worthy X-Men: Last Stand, there was a long lull and then they came back with an interesting idea: reboot the franchise with its origin story but set it in the time the story was created.

Count me among the skeptics for that move. But the reality is that it worked really well. They now have a semi-thriving series working and can make more X-men movies, keeping Marvel away from the cash cow of the 1980s that it sold off and wishes it could get back.

But it is even beyond the time warp of the X-men series that the Fantastic Four should become a period piece.  The Fantastic Four was conceived by Stan Lee and Jack Kirby in response to the space race that was happening around that time. The essence of these characters should be that they are explorers.  By setting a new Fantastic Four in that era, you get the chance to see some amazing things created. Let them be explorers again and not youngsters doing it.  That worked for X-men because they are a school. Don’t think that has to be the case for this.

Make it about family. The Fantastic Four is the original Marvel Comics first family. While the Avengers may rain supreme right now, the Fantastic Four has long been built on the family idea. From Reed and Sue’s marriage, to kids, to Uncle Johnny and Uncle Ben being hilarious nannies to the kids, Fantastic Four is at its best when it is focused on its relationships.

I need to see the Torch and the Thing in adventures but also hitting up a bar and trading verbal jabs. I need to see that even those his best friend turned him into a monstrosity, Ben Grimm knew that the Fantastic Four is his family and stuck around. There are so many dynamics that the most recent movie didn’t explore.

But spend the time to build a multi-story arc and spread it over several movies. If Black Widow and the Hulk had become an item when they first were introduced, we wouldn’t have believed it. Instead, they slow played it and it might be one of the best parts of the most recent Avengers movie. 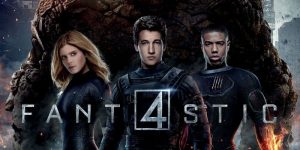 Don’t make it about a BIG BAD. So, the one thing that the most recent Fantastic Four does well, doesn’t get enough credit for, and should repeat: it does away with the idea of the Big Bad. (Until the end when Doctor Doom shows up, is used up, then ruined in the last act of the movie.)  And that move is smart, even if it is squandered.

Sure, there are moments when the movie needs things for them to overcome but the truth is that space pioneers and scientists are a lot of time guilty of creating their own worst case scenarios. Even the creation of the team and their powers is rooted in that. So, let that be the driving narrative.

Sure, you do have a rogue’s gallery you can mine eventually for this team, but for now, tell compelling stories that don’t rely on an omnipotent Doctor Doom to show up.

Make it centered on Sue. Lastly, take a chance and make the story be centered around Susan Storm-Richards. Few people seem to get that Sue Richards is a character that we have walked with from teenage-y romance to courtship to marriage to children, all the while being a powerful, strong superhero.

Someone is going to take the chance to make a female centered superhero story and it is going to be amazing. This character could and should be the centerpiece. Yes, Reed Richards is usually that centerpiece but he doesn’t have to be. Fox, if you want to do something that Marvel hasn’t done well yet, build a beautiful movie around the powerful Invisible Girl who become Invisible Woman.

This last Fantastic Four movie was a disaster, but the above are ways that it can be made better.

Thanks for reading. If you’ve enjoyed Nerds on Earth, please share using the social media buttons just below.

7 Thoughts About Ready Player One