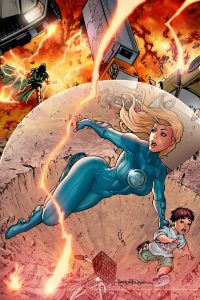 The Invisible Woman first appeared in 1961 in the pages of The Fantastic Four #1, created by by the superhuman duo of writer Stan Lee and artist/co-writer Jack Kirby. Then called the Invisible Girl, Sue Storm’s primary superpower dealt with light waves, allowing her to render herself and others invisible.

Sue was confident, intelligent, compassionate, strong, and brave. She was the soul of the Fantastic Four, playing the key role in the lives of her hot-headed younger brother Johnny Storm, her brilliant husband Reed Richards, her close friend Ben Grimm, and later with Franklin and Valeria, her children.

Sue Richards is a beloved comic book character. On page, she was the object of infatuation for Doctor Doom and, most notably, Namor the Sub-Mariner. And in the hearts of all comic book readers, The Invisible Woman was without a doubt everyone’s favorite comic mom.

Comic books don’t exist to provide realistic portrayals of physics. Us readers merely suspend our disbelief when we are presented with Sue’s power to render herself or others invisible at will by mentally bending all wavelengths of light in the vicinity around herself, without causing any visible distortion effects. 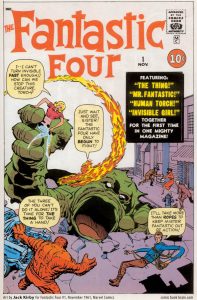 Researchers at Duke University’s Meta Group are invisible to us mere mortals. Literally.

Dr. Stephane Larouche is part of a super team that is experimenting with futuristic metamaterials: specially designed materials that have been created to produce an unnatural effect. When it comes to invisibility and cloaking, it’s all about light, and the scientists at Duke have performed a feat heretofore only believed possible by great minds like Reed Richards or Tony Stark.

Metamaterials science is providing us Earth nerds with our best hope yet of one day disappearing entirely in social situations, by bending light around us to achieve invisibility and cloaking.

“The way cloaking works, when a beam of light enters a glass of water it shifts a little bit, so it appears crooked,” says Larouche. He says that the cloak would work in a similar way, in that when light enters it, the beams would be directed in the opposite direction as it went in. “So if you were to look at it, you wouldn’t see anything there, just because all the beams of light have been moved around the center region,” he says. 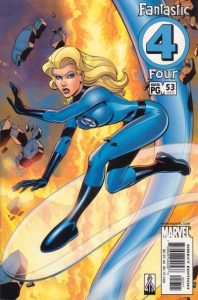 To get light to bend around an object and seamlessly come back together on the other end is a feat once thought only possible in comic books. Currently, the ability to bend wavelengths of energy has only been demonstrated using microwaves by Duke researchers (2006). Although in 2015, Berkeley scientists published a paper about a new “wrap-around invisibility cloak” made of a super-thin metamaterial.

Alas, Berkeley’s process, too, was only achieved on a small scale. Creating the effect on visible light requires that the metamaterial be shaped in nanometers, something that is currently only fully possible by using Pym Particles. Still, cloaking fields like those used by The Predator aren’t wholly in the realm of science fiction anymore. They’re now science science.

But if Sue Richards is bending light around her in order to become invisible, then how does she see?

Our eyes need light. Our vision is based on the light rays that enters your eyes, and if all of these light rays were diverted around someone under a metamaterials invisibility cloak, the effect would be total darkness.

Luckily, we’re talking about comic books here. One panel might flippantly say that Sue Richards subtly bends just enough light into her eyes to allow her to see. Then the very next panel has Thing punching Fing Fang Foom and us nerds go with it. Because we like fun, so why wouldn’t we?

Aliens and Future Tech: Why the Military is Developing Comms Straight out of Science…

Another Brick in the Team: Examining Marvel’s Beefy…