Did you know that Marvel has a character who has demons for hands? Like literally. Instead of having actual hands he has two little demons that live on the ends of his arms.

But Master Pandemonium–the demon-handed menace of Mephisto–isn’t even the weirdest villain in Marvel comic books. We’re calling him #8. Let’s look at 7 villains who are even weirder: 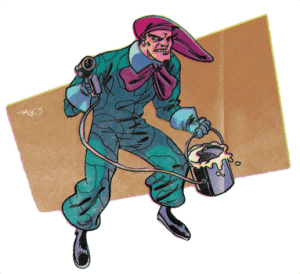 Peter Petruski was a New York City chemist who invented an extremely adhesive “multi-polymer” liquid. So he created a paste-gun to discharge his goo and started calling himself Paste-Pot Pete, using his invention to commit crimes.

Paste-Pot, er…Trapster was a frequent member of the Frightful Four, alongside the Wizard, Sandman, and Medusa, and battled the Fantastic Four on multiple occasions. 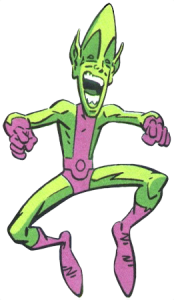 6. Impossible Man is a Poppupian from the planet Poppup in the 10th Galaxy, which doesn’t make sense as individual words, much less as a sentence. Poppupians have complete control of their own molecules, allowing them to instantaneously transform into anything they could imagine.

In New Mutants Annual #3, the Impossible Man challenged fellow shape shifter Warlock into an around the world anything-you-can-do-I-can-do-better contest, which was only won when Warlock changed color, the one thing Impossible Man was unable to do. It was awesomely ridiculous. 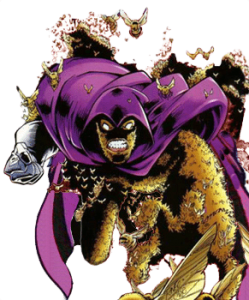 5. Swarm is what you get when to combine a Nazi scientist with toxicology and killer jungle bees. When mutant bees completely ovewhelmed Fritz von Meyer, they killed him. But his consciousness dissipated into the swarm of bees, making von Meyer a living embodiment of the swarm.

With von Meyer’s scientific mind added to the mutant intelligence of the swarm, he began to use his powers to conquer, as one does.

Swarm is a composite being of literal hundreds of thousands of bees. He is intangible, as his body is  an aggregate of tiny little buzzers, and he can fly through the air or assume any shape and size he desires. Swarm can also mentally influence the actions of other bees. 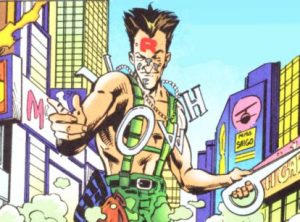 4. Typeface is Gordon Thomas, a soldier coming back from war with PTSD. When he was fired from a job, he cracked and decided to take revenge as Typeface. Later, Typeface became a vigilante, leaving notes saying “Compliments from your friendly neighborhood Typeface”.

His face was covered with painted letters, some with meaning like an “A” on his forehead (which stands for “annihilation”) or “R” (for “retribution”).

Other than hand-to-hand and weapons training, Typeface has no powers. All he gots is a variety of letters-based weaponry on his costume, including a razor-sharp letter “P.” I mean, that’s something, I guess. 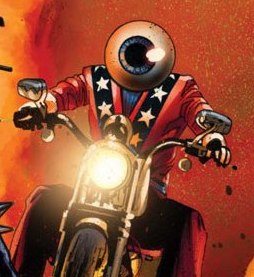 3. Orb is Drake Shannon, a motorcycle stunt rider from Wheeling, West Virginia, and a colleague of Johnny Blaze, the man who would later become Ghost Rider. While the stunt group was initially amiable, Shannon eventually developed an intense rivalry with Johnny Blaze’s mentor, Crash Simpson. To settle the dispute, the two men agreed to a race, with the winner taking all.

In the midst of the competition, Shannon swerved towards Simpson in an effort to force Simpson to crash. In what was a heinous backfire, the maneuver caused Shannon to lose control of his motorcycle, crash, and become permanently disfigured.

For really weird reasons, Shannon was given a powerful magical motorcycle helmet which was modeled to look like a giant eyeball and could hypnotize people or shoot powerful laser beams from its “pupil”.

2. Mandrill has a monkey-like appearance, which is odd enough, but the real kicker is that he has pheromone powers that makes the ladies love him.

Created in 1973, I like to think the Mandrill was creator Carole Seuling’s throwing shade at unattractive men who thought they were the bee’s knees with the ladies (reference to Swarm was unintentional). But the origin story goes that before conception, Mandrill’s father was caught in an explosion in a nuclear facility and that bombarded him and a cleaning lady with radiation. Okay.

For his dastardly posts, Mandrill routinely raises an army of women to do his bidding, one he called the Fem-Force. Mandrill is a misogynist who takes sexual advantage of his slaves. He has even married some of his slaves, becoming illegally polygamous. Sometimes comics aren’t for kids, even if they feature goofy-looking monkey men.

1. Madcap was a devoutly religious person. While he was on a church-sponsored mission trip with his parents, sister, and about forty others, the bus he was riding in was struck by a tanker truck filled with A.I.M. chemicals. Madcap was thrown clear during the accident and lay unconscious for several hours before coming to with his faith in a fair universe shattered after he learned he was sole survivor of the accident.

Distraught, he threw himself in the path of an oncoming car after fleeing the hospital, only to discover his wounds healed within seconds and he had felt no pain at all. He plunged deeper into madness.

Delusional, he bought a toy bubble-making gun from a dime store and stole a harlequin outfit from a costume shop. Inventing the persona Madcap, he decided to wander New York City and randomly cause people to go crazy in order to demonstrate to them the meaninglessness of existence. Friedrich Nietzsche would be proud.

Villains can be fun, huh? From living bees to single-eyed stunt riders, Marvel has had some of the weirdest characters in comics.

Another Brick in the Team: Examining Marvel’s Beefy…