As papa to two daughters, I’m painfully aware of how few strong female leads my girls see in movies, comics, and books. So when the Nerds on Earth Slack channel started buzzing with talk of fellow Earth Nerd Ross Hardy‘s new indie comic, Library of Alexandria, my ears perked up.

The comic is about Alex, a girl so tapped into the literary world that she can call on the powers of the five archetype heroes of all stories—the explorer, the trickster, the champion, the magician, and the sage—to help her keep her school safe from the worst villains and monsters of literature.

I love reading, I’m a nerd, and I have daughters, so Library of Alexandria sounded like it would be right up my alley. I picked it up on Comixology and got to reading.

The Art of Library of Alexandria

As soon as I saw the cover—which shows Alex perched atop a precarious pile of library books—I was hooked. Audrey Carrothers’s art manages to toe the line between reality and fantasy.

Scenes like this one of the cleverly named Creative Common Middle School take me right back to my own middle school days.

I don’t have a solid reference point in my own life for this scene of Alex fighting Grendel, thank goodness. Grendel’s representation as a living shadow, the embodiment of all evil, is superb. 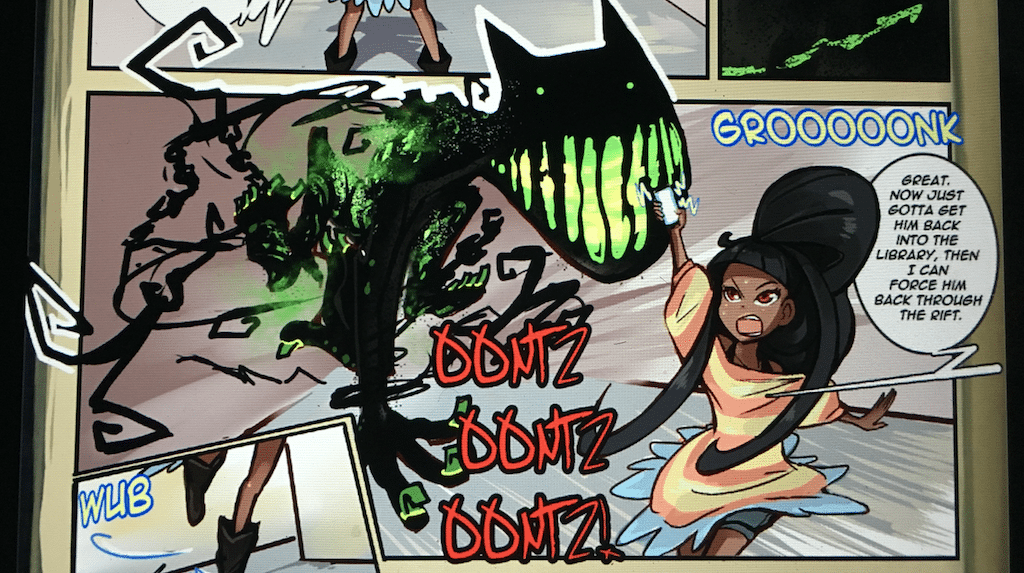 Stylistically, the art seems right in step with modern animation and cartoons. Alex would look right at home in anime like my family’s recent Netflix discovery and guilty pleasure Little Witch Academia, and sidekick Jonny Everywhere could have stepped out any number of post-apocalyptic video games. (My 8-year-old daughter saw him and said “is he from your game with the robot dog?” I’ve been playing a little too much ReCore, I guess. Which I’m not sure why, because it’s just meh. Anyway…)

Clever Stories in Library of Alexandria

The story is well matched to the artwork. The premise of Library of Alexandria is extremely imaginative: Alex got her literary powers by being raised by “a group of renegade library theorists.” While I recognize for some of the math and science majors that might sound awful, but it made my B.A. in English Literature tingle.

The first issue manages to both stand alone as an interesting story and to pique interest in the source material for those who haven’t read it. Coincidentally, if anyone knows of a translation of Beowulf that would be good for a twelve year old, let me know in the comments, please…

A Tween’s Take on Library of Alexandria

I could write more on Library of Alexandria, but as they said on Reading Rainbow, “don’t take my word for it!” Here’s what my 12-year-old daughter had to say after reading the comic:

It really reminds me of Avatar: The Last Airbender with how she can channel the different hero types. I really like the artwork too—you can tell what the characters are thinking just by their facial expressions! Alex’s hair is really cool, too. It looks like it could reach out and grab something.

I like how the bad guy’s weakness is fun and good things. It’s funny how they can hear and talk to the narrator.

She’s not wrong. The clever fourth-wall-breaking narrator infuses the entire comic with a light-hearted, funny vibe that just works. 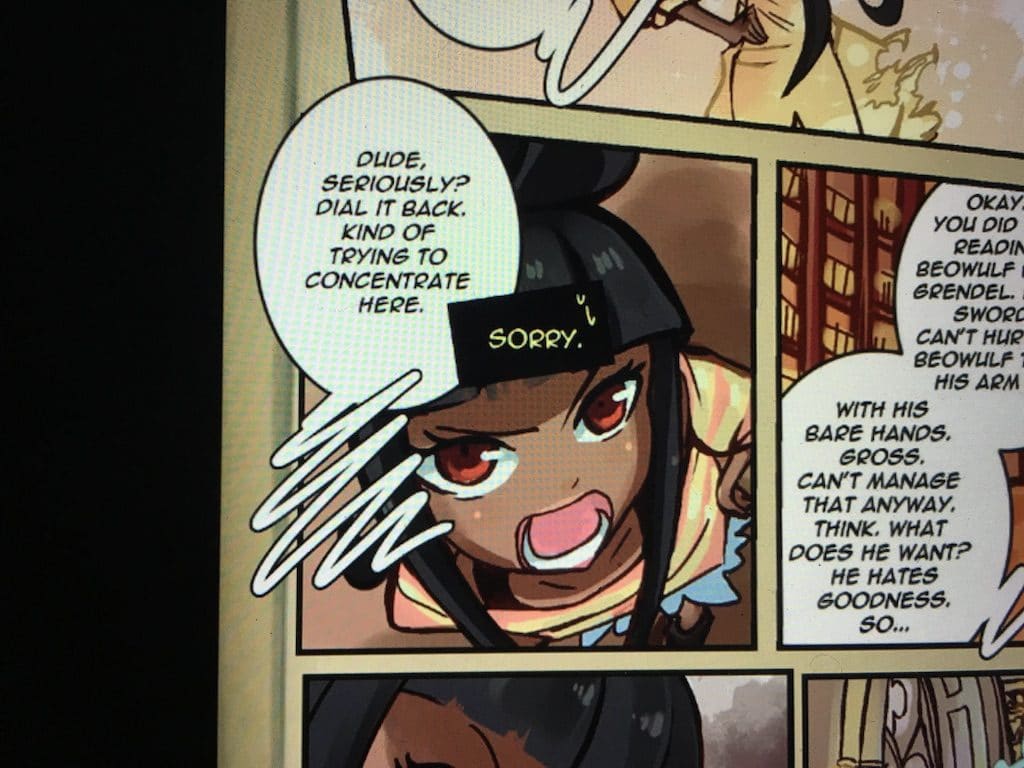 We’re both looking forward to many more issues full of Alex’s adventures!