Where to get help in understanding what your kid is watching.

When you are parent, everything’s disposable. Whether outgrown, thrown from the stroller, or simply pooped upon, objects in a kid-filled home rarely last very long.

So when deciding which stuffed bear to buy, bear in mind the short half-life of anything that comes within reach your your little honey boo boo bear. And even if you are considering it as a gift, don’t even worry yourself that it will come off as cheap, as most gifts from non-parents are so adorably and sweetly naive:

“Look it! It’s hand-crafted by Tibetan sherpas, moistened by unicorn tears, and made from allergen-free yak hair, the most durable, natural, and hypo-allegenic natural fiber,” they’ll say. “I bought it on Etsy,” they’ll add.

“I ate it and now my belly is full of yak hair,” your child will say. “Burp,” they’ll add.

Believe me: No parent has received a practical, utilitarian gift and complained. Seriously, the Target gift card is always welcome. If anything we’re relieved we don’t have to trot out the fancy gift every time you visit.

So why am I talking about stuff? Well, as children get older, worries over breaking physical things are replaced by anxieties of what digital media they are consuming. And just as practical gifts are best for toddlers, practical digital advice is best for parents of older kids.

The most practical and useful digital advice I can give to parents is Common Sense Media.

Common Sense Media is a website that reviews and applies age ratings to movies, television, games, YouTube, and apps, meaning pretty much any digital thingie your kid might consume. Rather than the hand-wringing nonsense that says iPhones are tearing a hole in the fabric of society, Common Sense Media provides a…well, common sense approach that clearly presents the data, then lets parents make informed decisions that fit the values of their family. 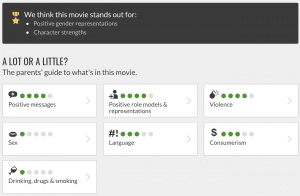 Content is scored in the categories “Positive Messages,” “Positive Role Models and Representation,” “Violence,” “Sex,” “Language,” “Consumerism,” and “Drinking, Drugs, and Smoking.” Both parents and kid are able to weigh in with reviews.

Common Sense Media neither takes a puritanical angle, nor one of a luddite. But the anxiety a parent has over digital media is real, as we can’t have eyes everywhere, so the clear, unbiased information is a huge help for parents who want to direct a kid’s media diet.

Movies and television is helpful, but the real benefit comes from the data surrounding YouTube. I had no idea who Logan Paul was before the recent controversy surrounding him, and I frankly have no interest in learning anything about him. But with the ubiquitousness of YouTube, it’s Pollyanna to expect that a kid wouldn’t run across that type of content somehow. Common Sense Media helps parents understand what the channel is about without having to actually, you know, bore our eyes out watching the video. Same goes with popular apps.

It’s a parent’s responsibility to actually fill a kid’s mind with good genre-heavy nerdy stuff, as is correct and true. Common Sense Media only shines the light, it’s up to a parent to get the kid on a true path toward fantasy, science fiction, and Marvel. (natch)

But in terms of helpful and practical tools, Common Sense Media is handy for parents. It will get much more use than a Sherpa-crafted, BPA free, artisanal teddy bear from Etsy, that’s for sure.

Four Things I Learned Listening to the Glass Cannon Podcast