When the Starfinder core classes were announced, I knew immediately that I wanted to be a Solarian and was convinced that anyone who said they didn’t want to be one was lying.

I’d sort out the race later, but I was darned sure going to have a solar mote, solar sword, and some cool cosmic powers. And while a Solarion is not as spell heavy as a Technomancer, it would pull me out of my penchant for strictly melee PC builds. Magic intimidates me, so I pushed myself out of my typical comfort zone and rolled up a Lashunta Solarian and a Ysoki Tehcnomancer; the latter on deck as a backup, just in case.

Flipping through the races, I’d initially considered rolling up an Android Solarian Scholar who would function very much like a mobile library–traveling the cosmos and amassing all the knowledge (very much like Big Brain from Futurama).

But we already had someone considering an Android and we actually ended up with two, so I switched gears.

I landed on the Lashunta because of their built-in magic:

At Will: Daze and Psychokinetic Hand (both 0-level spells)

Here are the character features I chose:

So now was the time to build a story. I love this step! What follows is what I care to share about Olin’s life up to her involvement with the Starfinder Society. I’m in favor of the slow reveal–in part because that’s how we get to know people in real life: in pieces, over time.

Olin Essa is a Lashunta Robin Hood that stole from the wrong rich to give to the poor.

Her solar manifestation glows a gentle blue hue as it hovers near her antennaed head. With a thought, it manifests into a deadly, two-bladed weapon. With yet another, implosions and explosions are within reason. She was not able to steal for so long without ability; though she has more than once met her match and awoken in bonds or bloodied and left for dead.

Olin hit the Strom family; an over-rich, exploitative family of Machiavellian lobbyists with naught but their own pockets and interests in mind. Never mind the fact that their bribes are directly responsible for legislations that lead to a three-fold increase in the poverty rate on Castrovel.

She left that night with what she came for: a ledger detailing business transactions the Stroms would not want leaking. She meant it only for collateral; maybe a bargaining chip on down the line if this particular family of thieves caught her thieving.

This wasn’t supposed to be the last heist. So long as there remain poor on Castrovel, she would continue to operate. But her telepathy failed her. She didn’t sense the presence of the guard until it was too late.

Now her face and name were flashing across bounty boards all over the system. She was being hunted by a family with nearly bottomless resources and a far-reaching network. 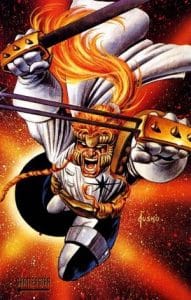 At creation, the Solarian chooses what form his Solar Manifestation will take: Armor or Weapon.

I went with a Solar Sword (that looks like Shatterstar’s double-bladed sword from the 90s) and spent the money I saved not having to buy a melee weapon on some enhancements and upgrades for Olin.

Solarians are optimized when they strike and maintain a balance between their Graviton and Photon moves.

At the beginning of each combat round, the Solarian chooses to attune to one of three modes: Graviton, Photon, or Unattuned.

Photon attunement grants him or her a +1 insight bonus to damage rolls.

And if the Solarian takes three consecutive rounds of attunement one way or the other, he or she becomes Fully Attuned and grants access to a Stellar Revelation specific to the attainment.

At level 1, the Solarian’s Stellar Revelations are:

Using a Stellar Revelation resets all attunement (back to unattuned).

The Solarian has to be careful about the balance of his or her Revelations, or attunement or both modes becomes more difficult–requiring 4 rounds of attunement instead of three. But as I read it (see “Disproportionate Revelations” on pg 104 of the Starfinder Core Rulebook), you don’t have to use the Revelations in balance.

In other words, for every use of Supernova you don’t have to have a use of Black Hole. You just have to choose a balance of Revelations at 2nd level and every 2 levels afterwards.

I’ve only played Olin for a single session so far, and I love her. I love everything about her. I cannot wait to manifest my Solar Sword again and mow some baddies down. I also look forward to seeing how her backstory plays into the unfolding story.

Will her past catch up with her, or will the Starfinder Society prove a sufficient buffer?

Find out as I do by listening to The Drift Podcast!

Aliens and Future Tech: Why the Military is Developing Comms…

An Introduction to an Android Operative for the Starfinder…