Back in 2013, the folks at Paizo and the folks at Dynamite comics came together and made a beautiful baby in the 5 issue series entitled Pathfinder Goblins! Each issue features two stories by various writers and artists centered around the little green heathens and their laughable shenanigans.

Each story stands alone and is absolutely fun and funny, but Paizo and Dynamite did not stop at producing a few entertaining short stories. If they had, the likelihood that I would be covering the series for Nerds on Earth is miniscule. The Pathfinder Goblins! issues bring more to the table than that. 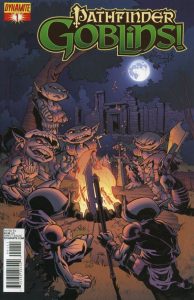 Many of the ten stories contained with these five issues are perfect one-off adventure hooks; particularly for kids. The younger generation of tabletop gamers will get a kick out of the tomfoolery of the little beasts, and the brevity inherent in the stories plays well with the average attention span of children.

At what’s more, they are all but set and ready to go for you!  Included in the back of each issue are a couple of goodies for the DM side of the screen to add a little flavor to the game. You’ll get item descriptions and stats, random treasure tables, lore, and creature stat blocks for at least one of the featured and named goblins from the stories in that issue.

Three of the stories in particular lend themselves to quick and fun one-shots.

The One-Eyed Goblin is King

A gang of goblins ambushes a party of adventurers at their weakest point (on their way out of a perilous dungeon) and absconds with the magical item the party fought for – an eye of the Undying Arch-Lich Kalzaroth.

The goblins feud over who should keep the eye and this leads to a hilarious series of goblins cutting out one of their eyes to replace it with the magical item until Kalzaroth returns and claims what is rightfully his. 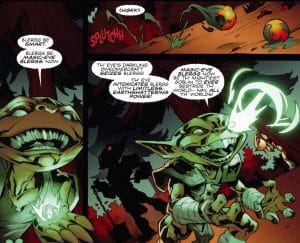 You could have your party arrive on the scene of a roiling mass of goblins as they alternatively kill the current owner of the eye, gouge their own eye out, and shove Kalzaroth’s eye into their now empty socket.

Each round would be absolutely bonkers as PCs and goblins alike attacked the current keeper of the eye. And just when they PCs thinks its over…they could have a bunch of reanimated goblin corpses to deal with (as “undeath is a side effect” of possession of the eye, however brief) and/or an appearance by Kalzaroth himself!

TIP: Since liches can be tricky adversaries (they get a standard +2 to whatever the CR is of the base creature), you’re going to want to forgo an early combat encounter with Kalzaroth, but that doesn’t mean you couldn’t or shouldn’t have him hunt down the PCs when they’re at a more reasonable level to reclaim that which is rightfully his! Perhaps in this first encounter he is too weak to retake the eye, but makes a foreboding promise to take it back once he’s back to full strength. 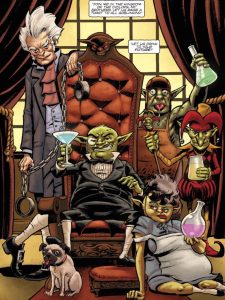 Korvosa.  One of the goblins, Gribbet, steals his master’s “magic eye” (a monocle that grants +4 to Intelligence) while he sleeps and hatches a plan to plant goblins in several of the prominent homes; positioning them ideally for thievery and blackmail.

Valuable jewelry goes missing and dangerous secrets are revealed all throughout the city. Can your PCs bring an end to Gribbet’s grip on Korvosa?

TIP: Gribbet’s stat block is provided in the back of issue #1.  Additionally, the missing jewelry and unearthed secrets can lead to all kinds of side quests within Korvosa. Get creative!  Use this as a fun tutorial for newcomers to the Pathfinder system and maybe even transition them from this into the Curse of the Crimson Throne adventure path which begins in Korvosa.

All over the realm, goblin raiding parties are entering cities and stealing wheelbarrows full of 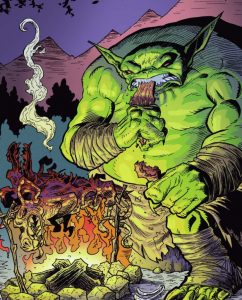 food and nothing else. Soon other stories start to spread around; stories of a hulking goblin found eating dogs over an open fire and sitting amidst a pile of humanoids bones and armor.  There’s even the rumor that he’s eaten a dragon.

As your party investigates the stories, they might run into a goblin raiding party only to find out that Kronkshaft (the voracious eater) has been kicked out of the clan and is roaming afield on his own. Or maybe the PCs just follow a trail of rinds, bones, and cores out of a city and into Kronkshaft’s cave.

TIP: Kronkshaft’s stats are not provided in the comics, but he can be built using the Over-sized Goblin options available here or you can home-brew something else reasonable. He is no ordinary goblin, after all! You can also make his weapon, Dragon’s Claw (a dagger), a bit more formidable just by making it +1 and possibly beefing it up further with Keen. That would make for a sweet loot drop for a lower level PC for sure!

Pathfinder Goblins! Ham It Up

Kids will get a kick out of the goblin encounters; particularly if you ham them up as you role-play as the little green monsters. Adopt some of the choppy speech mannerisms and made up words when they speak. Conjure up a silly voice to go along with them. Keep the dialogue funny and use it often! If a round goes by in which you don’t make some silly wisecrack, laugh-inducing threat, or engage in some hilarious and completely random name-calling (You smelly bellybutton muncher! You eat your boogers in bowls of earwax for breakfast!), you’re roleplaying the goblin wrong!

There’s a reason the goblin is the only plush toy Paizo has on the market. They’re about as cute and entertaining as any threatening creature from the Bestiary gets! You might even considering rewarding your intrepid young heroes with the toy as an out-of-game reward for in-game victory. That’ll be something they won’t soon forget!

The five issues are available here, collected as a hardback, which is a pretty average deal if you are only in it for the comics themselves. The value added by the inclusion of the usable Pathfinder material (stat blocks, items, tables, etc) elevates that price to a good deal, for sure.