Recap and Review of Agents of SHIELD Episode 216: Afterlife

After last week’s episode, in the war between the two SHIELDs, what happens in Agents of SHIELD Episode 216: Afterlife? What is going to happen to Skye now that she has been teleported away by Gordon? Spoilers follow.

[divider]Recap of Agents of SHIELD Episode 216: Afterlife[/divider]
Coulson and Hunter know that they need to get to Skye, and after some witty banter with a used car salesman, they ultimately just shoot him with a tranquilizer and head to Skye’s cabin.  They quickly learn that Skye isn’t there because Gordon teleported her away. Coulson intentionally triggers an alarm to get the other SHIELD to come get him. 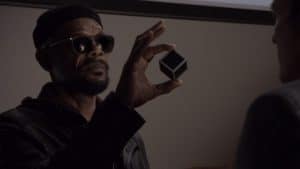 Mac comes back and tries to apologize to Fitz in an effort to recruit him, knowing the science may be what draws him back.  When he shows Fitz the work Simmons has done on the device, Fitz plays along and goes to the lab. While there, he works a little sleight of hand and leaves with the device. It is revealed that Simmons clued him in on what to do, as she has packed him a delightful prosciutto and mozzarella sandwich, along with a note to be safe.  More on this later.

Agent Gonzalez is trying to break May, who is still captured and arguing with Morse, who seems to be thinking that Coulson isn’t the monster that Gonzalez thinks he is. But Morse is also smart enough to know that when Coulson triggered the alarm, it was on purpose and she encourages them to heighten the number of people inbound.

When the first team arrives, Coulson uses a holographic projector, allowing him and Hunter to take down the first wave. When they head towards the Quinjet, which is the whole target of the operation, Coulson says help is on the way.

It seems like they are captured by a 2nd wave and headed for SHIELD prison, when the back-up arrives: Deathlok aka Agent Mike Peterson from season one.  Deathlok takes care of business, clearly being on version 2.0, and he hacks into the Quinjet and they are off. Hunter wants to know where, and Coulson needs to know more about this rogue element of Hydra they never tracked down, plus he needs someone who knows SHIELD as well. So they are going to find Grant Ward! 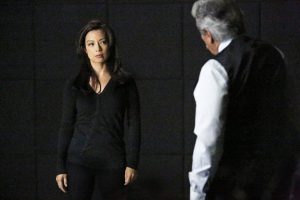 Gonzalez and May come head to head and it ends with him giving her a loaded gun and an opportunity to be one of the seats on the board that is running the other SHIELD. He gives an excellent speech about the whole thing needing to be bigger than one man, which when you take a step back and consider it, makes perfect sense. Some of the issues with SHIELD pre-Winter Soldier is that it was too Nick Fury focused. Gonzalez sees the problem with that and wants to make a new way. It seems May is considering it.

Interspersed with all of this is Skye and the Inhumans.  Skye wakes up a couple days after the teleporting. She has had acupuncture done and she meets Lincoln, who will be the one who helps her transition.  During her time in this oddly oriental themed spa, she learns some things:

Calvin – Skye’s dad – is locked up, and pissed about it. He has some appropriate to the character rants with Gordon; they get into some fisticuffs but Gordon is pretty good at teleporting to dodge.

Skye never does see Cal, but she does find Raina and they have a conversation. Skye is furious, saying that the two of them are radically different, but Lincoln says that they will nurture any Inhuman, even Raina.  Jaiying busts in, trying to talk to Skye, who clearly has no idea the scarred woman in front of her is her mom!

So, I give this episode a 6.5. I don’t dislike it but it also is one of the episodes that you have to have sometimes, moving around pieces and setting up what is eventually going to come.  That said, it did have some highlights and thoughts:

7 Gasp-Inducing, Heart-Wrenchingly Big Moments From Season 5 of The Walking Dead