Nerds always love the underdog. If I felt like putting together a treatise on why, I would probably dig back into the psychology of being the uncool, the unliked, etc. that every nerd I know either experienced or embraced post-adolescence.

That love of the underdog also extends out into who we root for, who our heroes become and what is popular in the nerd community. Again, I could write a long treatise on why Wolverine is more popular than Superman. (Hint: it isn’t because he is a polite Canadian.)

Stack that love of the underdog into our stories and you find that we almost always side with the rebellions. 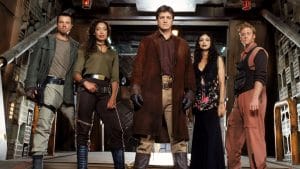 I’ve been thinking a lot about rebellions lately. (Given the state of American politics, I am certainly not the only one.) What happens when you reach the point that the existing power structure has to deal with a full on push from those under its control? What motivates people to fight and hold strong against the powerful empires that can oppress them? What makes a rebellion (and a rebel) tick?

Science fiction is rich with ideas about rebellions. (And spoilers abound from here on for the television show Firefly and the film Serenity).

When the Firefly television series began, the war was already over. Malcolm Reynolds and his first mate, Zoe, have long left the Battle of Serenity Valley, one of the climatic battles of the Unification War. At that battle, Reynolds lost all of his men, save him and Zoe and many of the 2,000 he eventually commanded there.

The 7 week battle was estimated to have cost 500,000 lives, with 330,000 of being rebels. It broke Mal in many ways. Yet 6 years later, he finds himself in an Alliance bar on Unification Day, antsy to pick a fight, wearing a long brown coat, matching the colors of the Rebellion, a reminder that he was once part of something else.

Now, he is just a man running and hiding on the edges of space as best he can. As one of his famous quotes said “It may have been the losing side. I am not convinced it was the wrong one.”

Eventually, the discovery of some knowledge from the telepath River that his crew has been keeping, the rebel is unearthed again. In one of the best speeches from a rebel leader ever, Mal says this:

The rebel is awoken. Mal’s misbehavior culminates in him being able to spread the information that River knew to the whole universe, undermining the facade that the Alliance was selling of a better world, revealing that their greatest attempt at bioforming a world had, in fact, created the nightmare inducing Reavers that now plague the universe.

In the moment when it mattered most, Mal and his crew put all their chips in, betting everything on a cause they believed in. And out of it, the new motto arises, “You can’t stop the Signal.”

And sometimes the rebel doesn’t even fit the rebellion. When the first trailer hit for Star Wars: Rogue One, the line that had me pumping my fist was when Jyn Erso says “This is a rebellion, isn’t it? I rebel.” 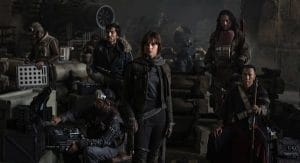 The one thing that the regrettable Star Wars prequels does is establish that the first wave of the rebellion wasn’t done with Jedis and Battle Droids but with boring political tactics about trade routes. (If you don’t remember, please don’t re-visit it!) And those political leaders go on to become the erstwhile leaders of the Rebellion against the Empire.

And yet, there is something about it that isn’t rebellious enough; they want to play by some kind of rules and standards and the real rebels want to rage against the Empire.

Whereas Star Wars is about a Jedi, a princess and a pilot, Rogue One is about the ones that the Empire has really tried to break, the ones who have lost families, homes, planets to the Empire’s efforts. And in the midst of that loss, they stand and say “We are with you to the end.” At the moment when they feel most lost, they still have hope. And as Jyn says “Rebellions are built on hope.”

And that is why the nerds will always be the rebels. Because we remember and believe the stories about hope.

Recap And Review Of The Mandalorian, S2E4: Chapter Twelve,…