It’s one of the most meme-worthy moments of an entire saga chock full of them. Darth Vader, fresh from his humbling loss (and dismemberment) by his former master Obi-Wan Kenobi, discovers that he has evidently “killed” both his wife and child in a fit of Sith-fueled rage. What was meant to be an emotionally devastating moment on film inadvertently turned into a farcical and perpetual butt of many internet jokes.

But how have two different comic books from two different publishers handled such an unintentionally clumsy moment? Read on to discover the fun truth! Just don’t, you know, reach out with the Force and destroy a bunch of medical equipment. Okay? Cool your midichlorians, my young padawan.

Revenge of the Sith

Released on May 19, 2005, Revenge of the Sith serves as the denouement to a prequel trilogy that had been maligned by the fanbase. Fans felt that George Lucas had allowed the prequels to stray too far from what made the original trilogy so special. The core elements of Star Wars were either abandoned or misread by the very person who had created the saga. By the time the last installment hit the theaters, many fans already had a deep sense of disillusionment with the galaxy far, far away that they remembered from their childhood.

Revenge of the Sith was never going to be a fun, feel-good Star Wars movie that was romanticized in our youths. The end result was never in question. This episode was going to be bleak! The Republic would fall, replaced by the Galactic Empire, and Anakin Skywalker would figuratively perish, giving rise to Darth Vader. This was never going to be G-Rated, uplifting cinema. It is a dark film, filled with anguish and despair. This reality make the notorious “NOOOO!” scene all the more dopey.

Ironically enough, despite it being the most predictable entry in the prequel trilogy, the general consensus from both fans and critics is that Revenge of the Sith is the best film of the prequels, even edging out Return of the Jedi from the original trilogy in the overall rankings for many. It’s a movie with several stark, riveting scenes that show the potential of what could have been for a prequel trilogy that was handled with more care and skill. Revenge of the Sith is actually a good film.

And then… there’s the “NOOOOO!” scene.

The scene in questions would have carried much more gravitas if Darth Sidious’s account of events to Vader had actually happened. Had Anakin/Vader literally murdered Padme in a fit of rage, that would have certainly given him some serious Sith street cred. It would have made the tragedy of Anakin Skywalker, the whole point of the prequels to begin with, that much more dire and nefarious. Instead, as explained to Obi Wan by an exposition-friendly medical droid, Padme dies in childbirth of a broken heart. “She has lost the will to live,” reports the droid.

After delivering the “fake news” version of events to Vader with the slightest hint of a smile, the incredulous and inconsolable Frankenstein turned Dark Lord of the Sith lurches forward, tearing himself from his restraints, and crying out in sorrow causes what can only be described as hundreds of thousands of Republic Credits worth of property damage. Good luck getting that covered by First Provincial Insurance of Corellia! The rest is history! Vader’s roaring disapproval comes in a close second in the “Spontaneous Yelps That Have Been Widely Mocked in the 2ist Century” to Howard Dean’s presidential campaign-ending howl the year previous.

At the time of the movie’s release, Dark Horse held the license for the Star Wars comic book properties. In a modern era of Disney-fied Star Wars production and J.J. Abram’s Mystery Box of limited spoilers, it may surprise many to find out that the comic book adaptation was released over two months before the actual movie release! I proudly bought it on the street date and read it in a frenzy, justifying my spoilerific dive into the adaptation months before its release in the event that I died in some horrible accident. Randy Stradley and Doug Wheatley directly introduced me to Revenge of the Sith, not George Lucas. 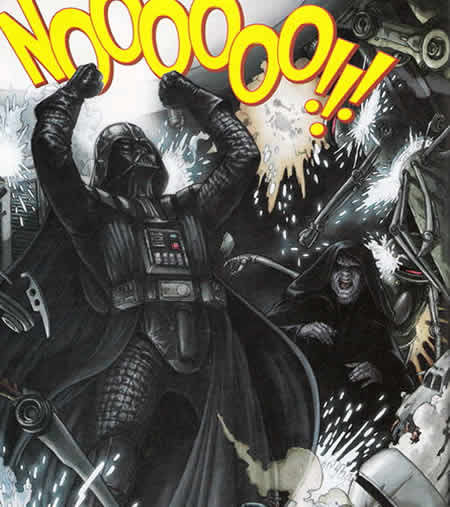 I remember reading the disreputable scene for the first time thinking that it would actually play well on screen. Vader is angry! He’s upset! That’s the Vader I wanted to see on screen, not some emo kid who likes dunking on Tusken Raiders and bemoaning the existence of sand. Yes, by George, the maker had finally captured the side of Vader we had all hungered for in the previous two films!

The scene plays out more jubilantly on paper than it does on the screen. Palpatine is much more openly pleased in the adaptation with his peculiar tooling of the series of events, expressively laughing as his apprentice howls his despairs away.  His distortion of the facts is the final, decisive deathblow that kills Anakin Skywalker and gives birth to Darth Vader, ruthless new enforcer of the Galactic Empire.

The panel for the “NOOOO!” scene does manage to capture the over the top nature of the moment quite well. Again, my skewed perspective of the moment was first filtered through the lens of the comic book. When watching the scene in the theater after shaving poured over the comic book panel by panel for weeks, it was a jarring experience. I definitely thought to myself sitting in the theater that I didn’t feel that level of cheesiness to the comic as I did to the scene playing out in front of me.

Marvel’s recent second Volume of the Darth Vader title loving returns to the Revenge of the Sith Era. Whereas the first volume from Marvel focused squarely on the weeks and months following Episode IV, the second volume picks up with the final few moments of Revenge of the Sith. The first volume was tonally different as well, with Doctor Aphra and her droids providing a heaping dose of humor to Vader’s usual surly attitude. Volume two erases all of the silliness. If you liked the hallway scene from Rogue One, this is the Vader title you have been waiting for. Charles Soule and crewe has been packing each episode with so much sinister Vader goodness that it’s almost overwhelming.

In Darth Vader, the reader sees the familiar set up of the “NOOOO!” scene. Emperor Palpatine sets up his miserable apprentice in much the same way, but Vader’s response is wholly different than what viewers observed on film or readers found on paper in the Dark Horse adaptation. 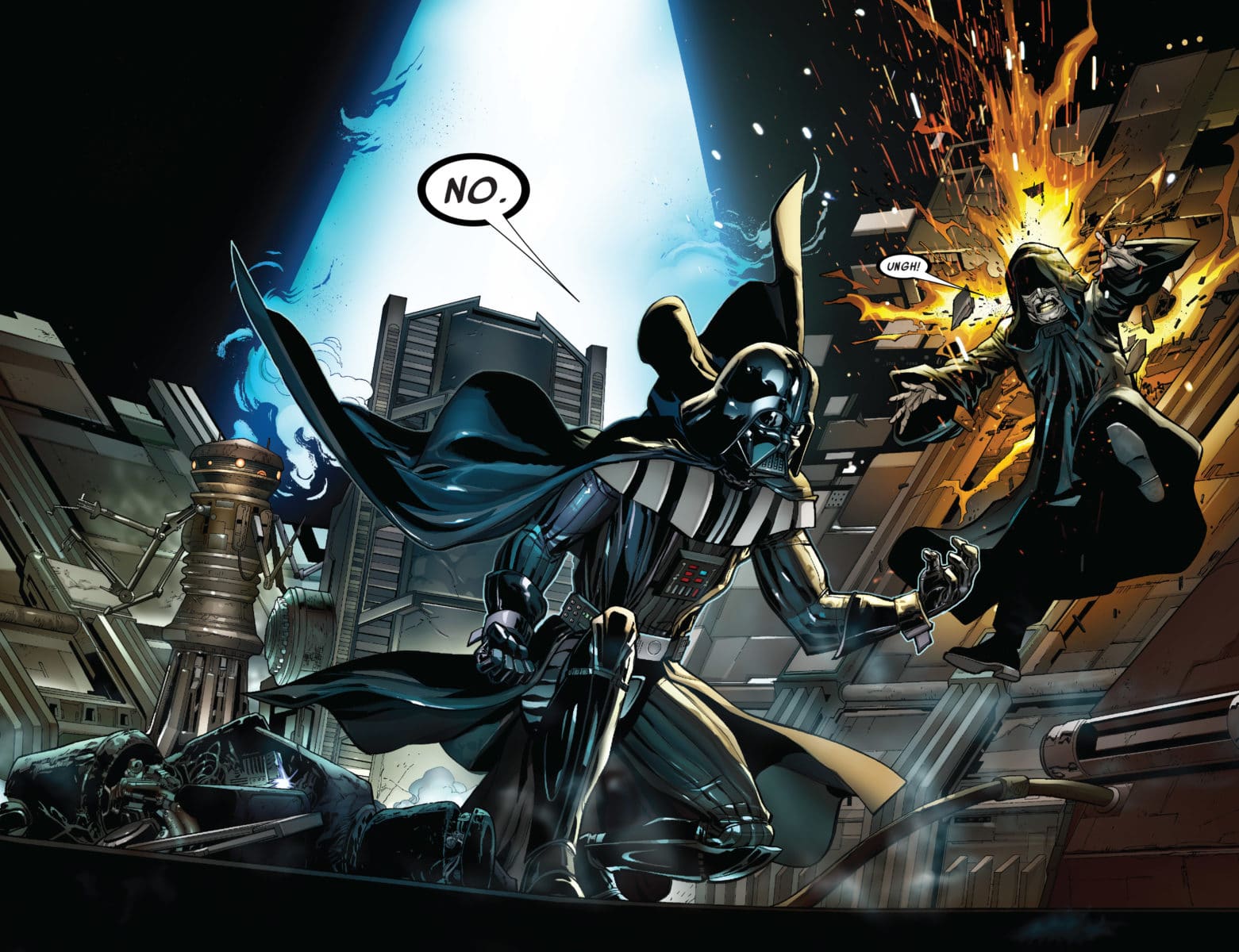 The scene is definitely more muted. Readers aren’t even given a trail of O’s or an exclamation point. The understated response stands in stark contrast to the widely panned melodramatic response recorded on film. The quiet reinterpretation could be comfortably found at Obi-Wan’s “From a Certain Point of View School of Recalling Canonical Events Differently.” Gone is the bellowing, disturbed Vader, replaced instead by a humbled and crushed Vader. The simple “No.” underscores the sorrow Vader feels as he learns the truth (from a certain point of view) about the events on Mustafar.

A humorous change found in Marvel’s take is what happens to Palpatine. Instead of conniving and laughing in the background at his significant victory in crushing Vader’s soul, he is instead being flung like a ragdoll. Vader is now guilty of elder abuse along with his previously detailed property crimes (and lets not forget the murdering of children too).

Writer Charles Soule and penciller Giuseppe Camuncoli finally give readers the “NOOOO!” scene they deserve. In giving readers the restraint George Lucas couldn’t manage to provide in the film version of Revenge of the Sith, Marvel’s interpretation brings a sense of respect to a fairly flunky moment. It gives reverence to the moment without overdoing it or putting too fine a point on it. While it won’t scrub the clunkiness of the scene from the movie, Soule and Camuncoli do a great job or reinterpreting the scene and hopefully giving us a better vision of what could have been. Let this memory replace the old one.

The Grand Admiral’s Return: Thrawn in the New Star…