By Michael Adkins On Apr 20, 2018 Last updated May 16, 2018
Share TwitterReddItPinterestFacebookEmailPrint

After interviewing game designers Jessey Wright and Sen-Foong Lim, IDW Games was kind enough to send me their handiwork: The Legend of Korra: Pro-Bending Arena.

Built from the Legend of Korra IP, it is a 2 Player PvP-style game modeled after the professional bending sport introduced in the just the second episode of the titular show.  You’ll construct a deck of cards, maneuver miniatures, and try to knock your opponents out of the ring by bending earth, water, and fire.

And just to shake things up a bit for this review, I recruited a friend of mine who absolutely adores the Legend of Korra, but had very little experience with more complex board games (in fact, when I asked, he gave the dreaded “Monopoly” answer, ha!).  The IP opened the door, but did he enjoy the experience?  Read on to find out! 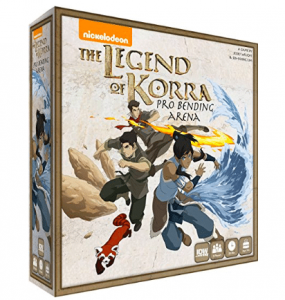 I gave my friend, Will, the full experience.  The first thing we did was punch out all of the tokens – 57 in all.  Immediately he was impressed.  Each token’s aesthetic is true to the show.  In fact, the more stuff we pulled from the box, the more he was impressed.  And he’s not wrong:  the aesthetics are true to the show, down to the tiniest detail.  The only trouble we encountered was visually distinguishing between the two sides of Element Tokens to quickly determine who controlled which.  The colors are fairly close on both sides of the Elemental Tokens, so we just went with the rounded side versus the flat side.

Then I had the joy of watching his eyes kinda glaze over as I read through the instruction manual; pausing like a 1st grade teacher from time to time to show him the pictures in the hopes of strengthening understanding.  He admittedly was a little daunted at first, but once we played a turn or two he picked it up readily.  But the good news is that set up is easy and the gameplay is relatively simple:  You increase your chi, play all three of the cards in your hand (performing the actions and abilities in order from top to bottom and left to right), resolve any hits, and then spend your chi to build your deck.

Our first play through took about 40 minutes and ended with…a draw.  Neither of us experienced a Line Advance, neither had successfully managed to knock an opponent’s bender out of the arena, and the Momentum Token was not in play.  Who wants that?!  Well, this happened for a couple of reasons:

Will was adequately entertained enough to schedule a Session 2 on the spot.  Even with the 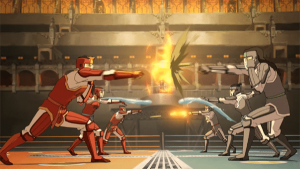 rather anticlimactic end to our first game, he was all in.  And so was I!  I pried him to see if there was anything he didn’t like about the game; anything at all.  He was hard-pressed.  I was a little less so.  I felt that the Element Tokens can get a bit clustered and messy later in the game – especially when you add in Hold Tokens.  You throw enough stuff at a square and it fills up fast.  The tokens could stand to be a bit smaller, for sure, in my opinion.

And the draw was a bummer.  I don’t want to play 40 minutes and tie.  So I reached out to one of the designers and he helpfully gave me two alternatives that the community had proposed to minimize or altogether eliminate true draws:

Problem: solved.  We played leveraging Option 1 and took turns being the player who started with that Momentum Token, and it 100% changed the way we both played.  In both cases, whoever went first won by the standard rules.  It was not due to any sort of advantage, but to a willingness to risk a bit more to get that token just in case of another tie.

(Editor’s Note:  There is already a great community of fans posting online about strategy, rules questions, and house rules.  If you hit a snag or are looking for some pro-tips, check out the BGG forums or Reddit page!  Chances are you’ll find what you’re looking for there.)

For games 2 and 3, we added in the Trick Cards and came prepared with a greater understanding of viable strategies for the gameplay.  They played faster and had quite a bit more depth to them.  He managed to knock one of my benders completely off the map in Game 2, and I successfully pulled off a Line Advance in Game 3.

We both commented on the surprising depth of strategy for what is on the surface a relatively simple game.  You can throw all the Element Tokens you want at a single square in the hopes of overwhelming your foe…only to have them play a card that allows them to simply move away from that barrage.  Did you think to stage some of your tokens in neighboring or even bender-less squares?  Could you have put a Hold token or two to greater use?

Most notably your strategy 100% depends on the three cards you have for your hand that round (plus any Trick cards you’ve got remaining).  All the well-wishing in the world won’t matter a lick if you don’t have the cards in hand to do what needs to be done to keep your benders in play.  So construct your deck wisely, hope for a decent draw, and play your cards in the most advantageous order as possible!

I pried once again for Will to tell me what he didn’t like, and this time he had something:  He felt like 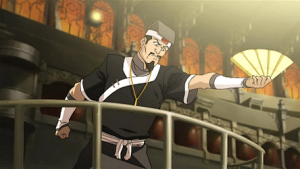 the Wolfbats’s Daze ability was far superior to the Fire Ferrets’s Counter Bend.  While I don’t readily agree, I can see where he’s coming from.  Counter Bend is only available to the Fire Ferrets if you have their 5 chi cards (you have to purchase them during play with your chi).  Daze, on the other hand, is available on a handful of the Wolfbats’s cards and some of them don’t even draw the ire of the referees (thereby threatening your bender with penalty tokens).  But this is somewhat balanced by the difference in their Technique cards in my opinion.

I will add this to the discussion as well:  The base retail game only comes with the two teams mentioned so far, but the Kickstarter version came with several additional teams (each with their own unique ability) and more Trick cards.  Those aren’t available as expansions yet that I’m aware of, but I sorely hope that won’t remain the case.  That would be a huge boon to the base game, for sure!  Otherwise I’m afraid that even with the currently available expansion, the game will stale quicker than it ought to.  I want to build my fantasy team!

There’s definitely something noteworthy here.  Being a strictly 2 player game is pretty limiting, and if you’re not a fan of the IP you could still have fun mechanically, but the best enjoyment definitely stems from the familiarity with the benders and the sport.  The fact of the matter is this:  You’ve either read this far without wondering what bending, elements, line advances, and knock out meant (hint:  it does not necessarily mean unconscious), or you didn’t.  If you’re still here, chances are fair you’d love Pro-Bending Arena…even if you’re not familiar with board games quite like it.  Just ask my friend, Will!

The game really does a great job of capturing the essence of the Pro-Bending sport featured in The Legend of Korra and is a faithful and fun translation to your tabletop!

[Disclosure:  IDW Games provided Nerds on Earth with a copy of The Legend of Korra: Pro-Bending Arena.]